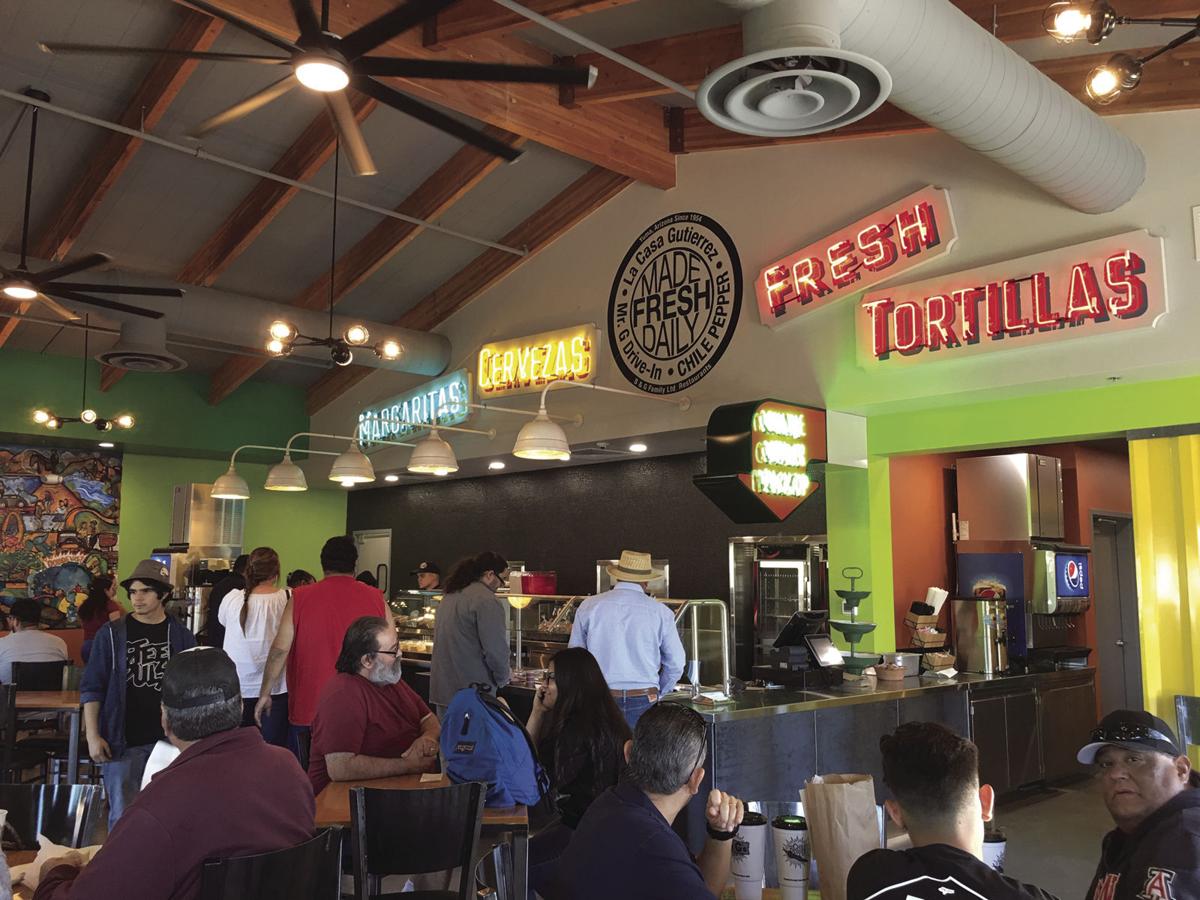 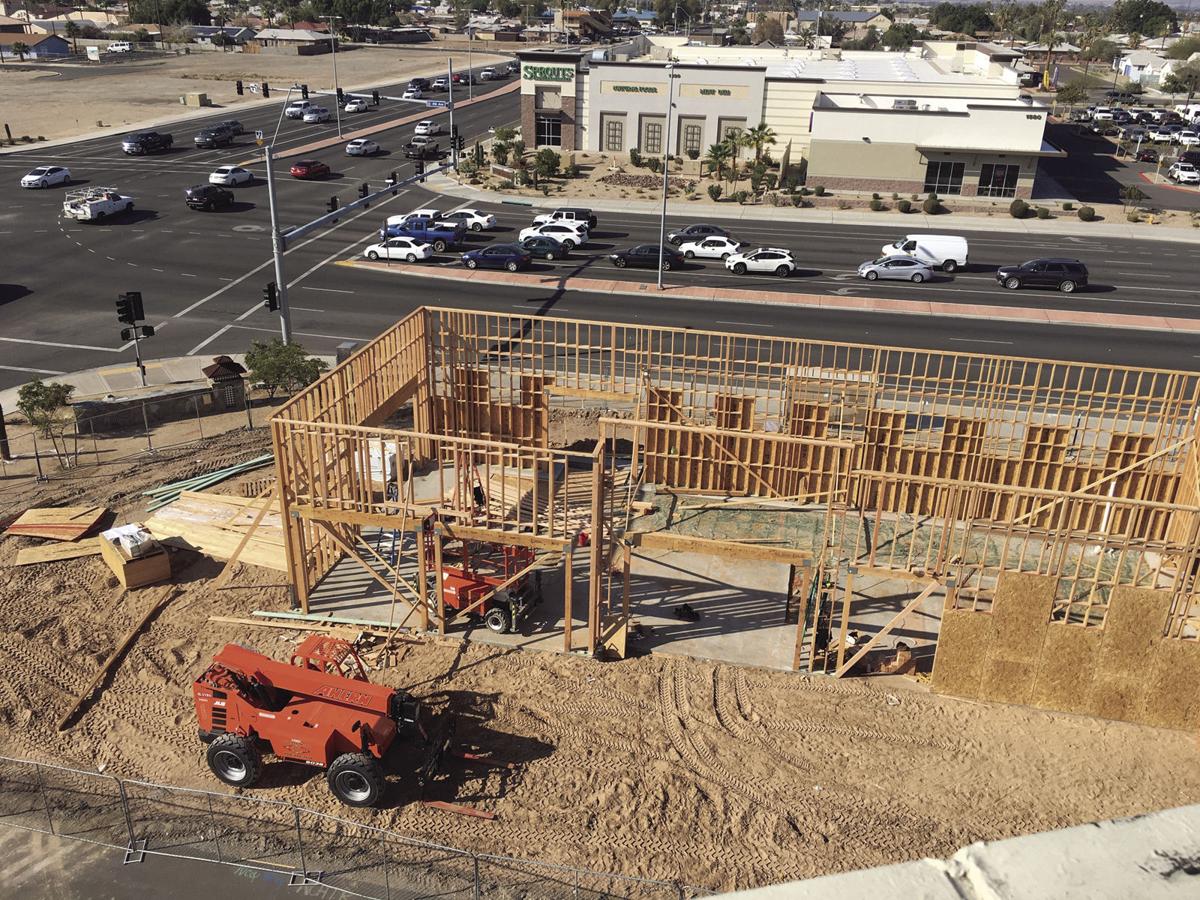 This photo, taken from the roof of the PMG Building, shows the Starbucks under construction at the corner of 16th Street and 4th Avenue, across from Sprouts. 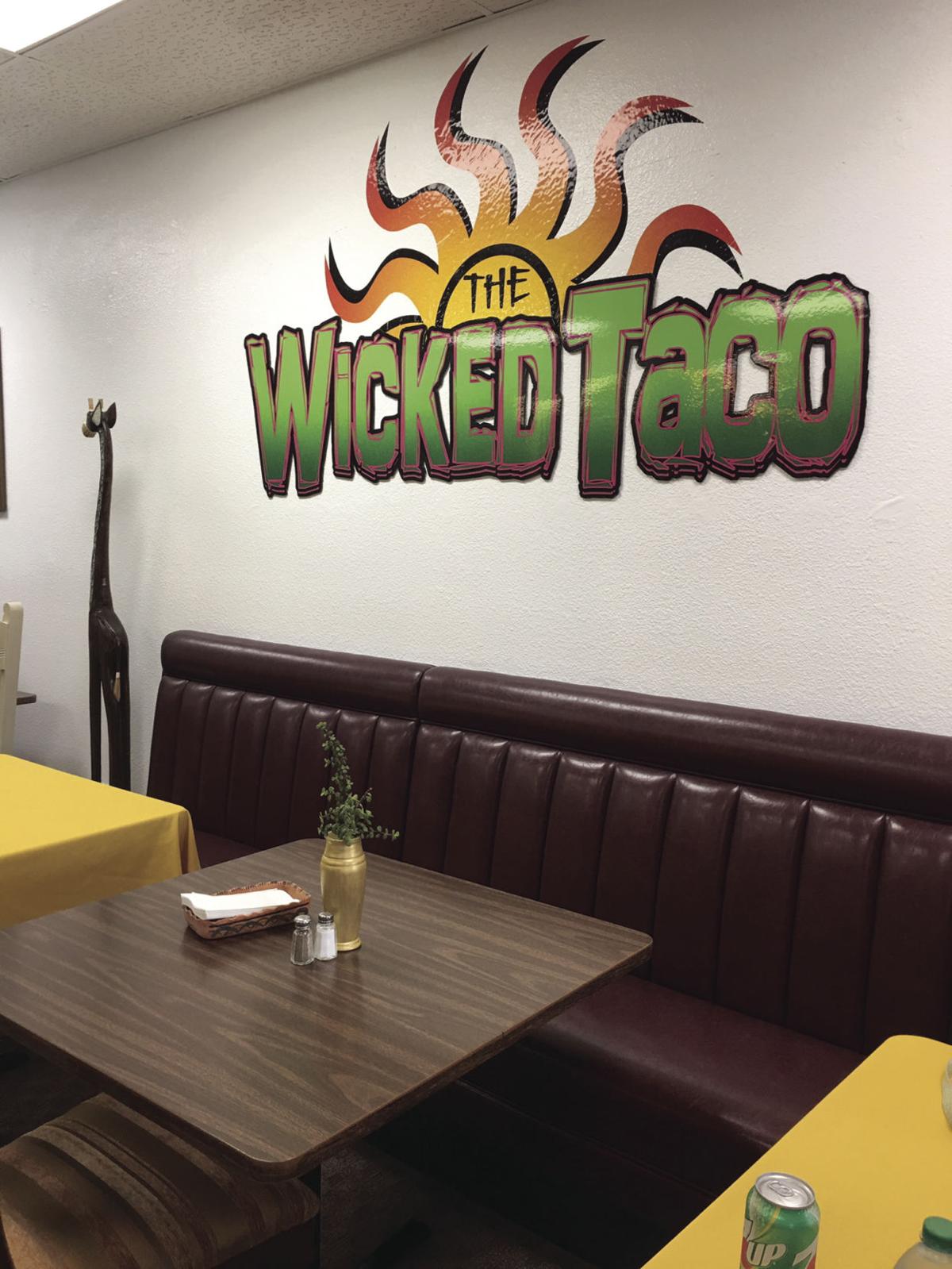 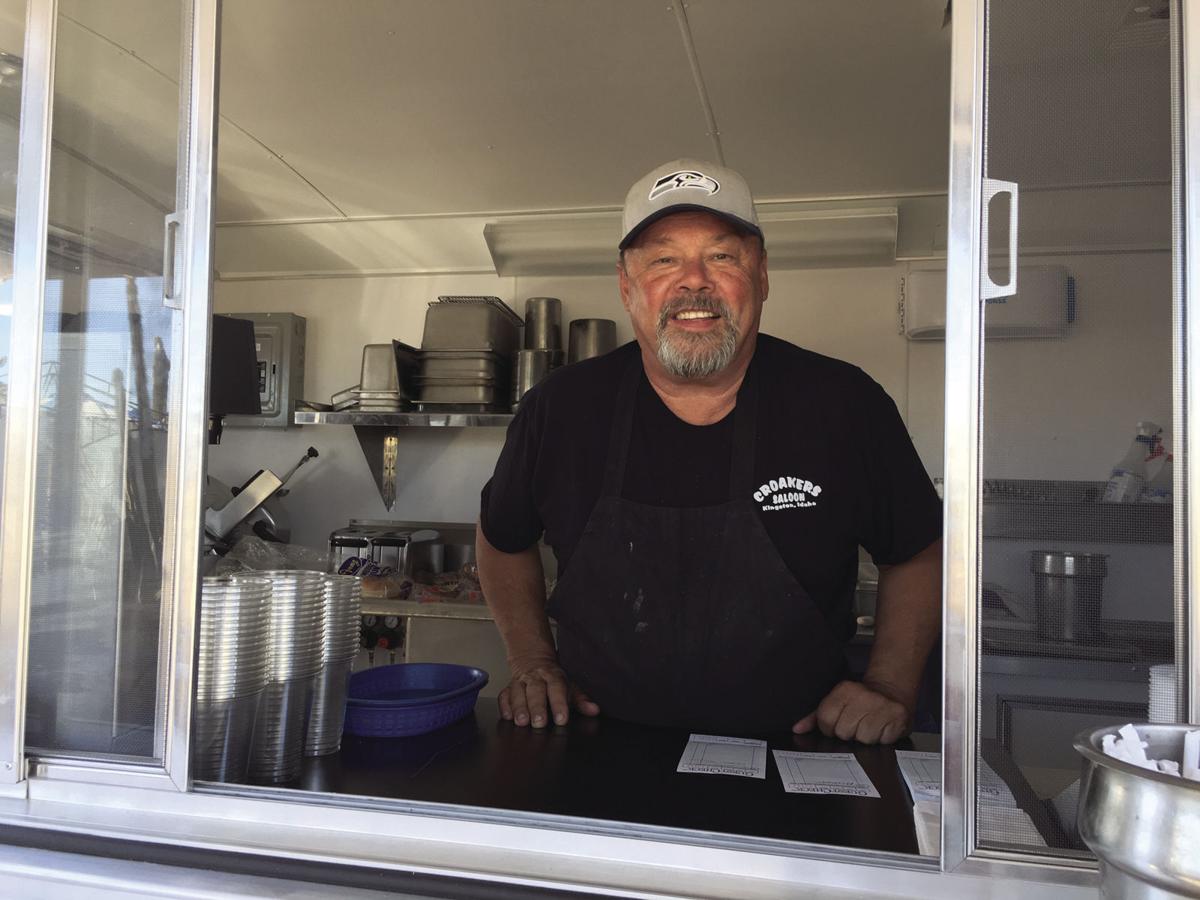 Rob Schot, owner of Rob’s Roadhouse Grill, is ready to serve customers at 12585 S. Frontage Road, next to the Trading Post. Schot ran Rob’s Grill on Fortuna Road for 14 years. 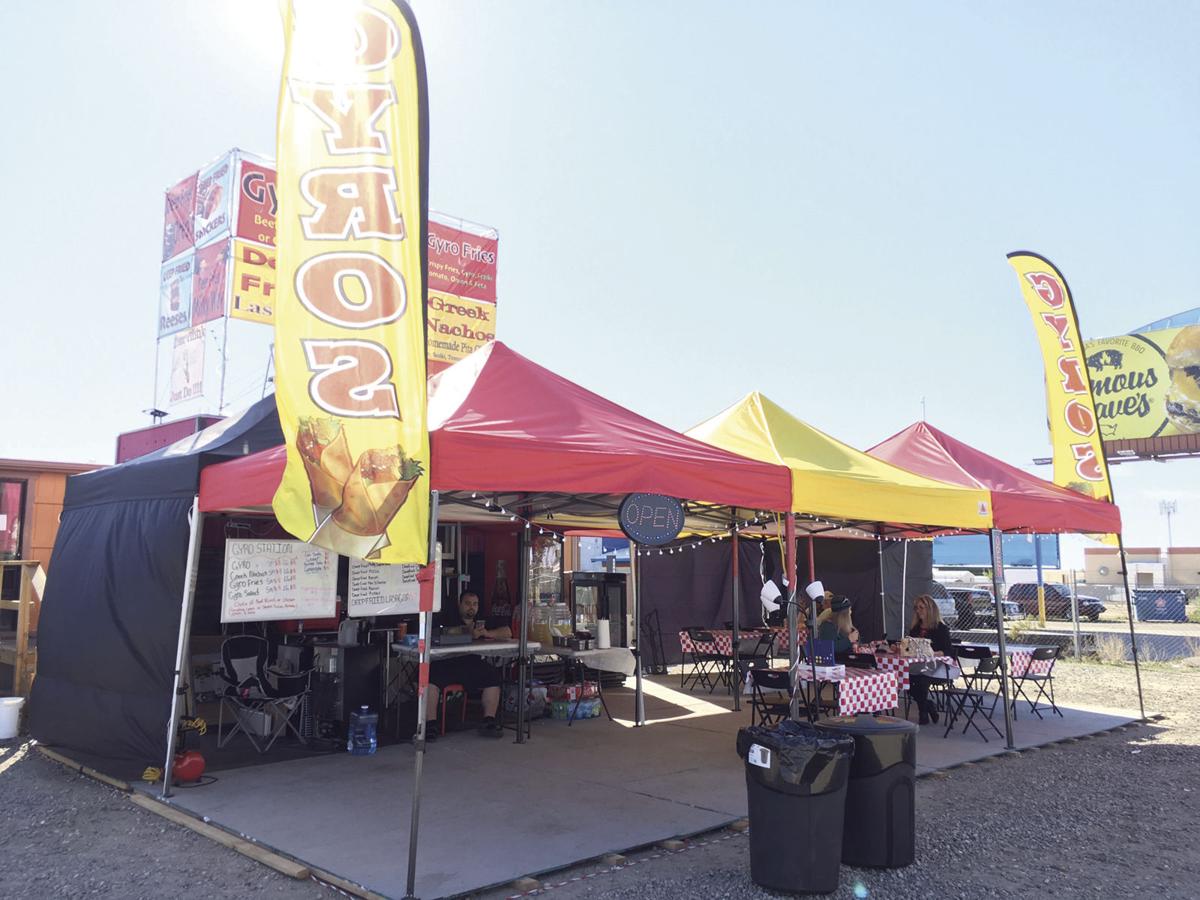 The newly opened Azar’s Gyro Station and Deep Fried Haven, 12557 S. Frontage Road, specializes in gyros, in the form of a sandwich as well as other ways, such as nachos, fries and salads. It also offers lasagna, Philly cheese steaks, pizza and even pickles deep fried in funnel cake batter.

This photo, taken from the roof of the PMG Building, shows the Starbucks under construction at the corner of 16th Street and 4th Avenue, across from Sprouts.

Rob Schot, owner of Rob’s Roadhouse Grill, is ready to serve customers at 12585 S. Frontage Road, next to the Trading Post. Schot ran Rob’s Grill on Fortuna Road for 14 years.

The newly opened Azar’s Gyro Station and Deep Fried Haven, 12557 S. Frontage Road, specializes in gyros, in the form of a sandwich as well as other ways, such as nachos, fries and salads. It also offers lasagna, Philly cheese steaks, pizza and even pickles deep fried in funnel cake batter.

It might be the worst kept secret since many have already heard, but we can now officially confirm that a new Starbucks is being constructed at the corner of 16th Street and 4th Avenue, right next to the four-story PMG Building.

Developer Tom Pancrazi of AT Pancrazi explained that they’ve been wanting to announce the project for a while, but they were waiting for the go-ahead from Starbucks. But with construction well under way, it’s hard to keep it under wraps.

At 28,000 square feet, this Starbucks will be larger than normal. It will have sit-down space, an outdoor patio and a drive-thru. It’s designed to encourage customers to hang out, work, study, read, hold business meetings or just meet someone for a cup of coffee.

Pancrazi is supposed to deliver the building with a finished exterior to Starbucks on May 1. Then the company will build out the interior, which can take up to 90 days. So expect it to open sometime in late summer.

Pancrazi noted that the coffee shop will go exceptionally well with the PMG Building and the tenants are excited. I don’t blame them. It’s within walking distance, not only for them but also for many other offices and retail businesses in the area.

Pancrazi joked that the intersection, called Center Pointe, will be one of the most energetic in Yuma. It’s no wonder, with all the caffeine that will be available in that area, with the soon-to-open Dutch Bros. Coffee, which also had the involvement of AT Pancrazi, and Dunkin Donuts, all within a stone’s throw.

By the way, the PMG Building still has seven individual spaces available on the third and fourth floors. PMG can lease spaces individually or multiple spaces to suit the tenant’s needs. Square footage range from 485 to 1,760 square feet. Each available space is completely remodeled and updated.

And, I must say, the top floors have incredible panoramic views of the city! For more information, call 928-782-0000.

The restaurant closed in July for a complete remodel and a new kitchen and drive-thru. Although the sit-down interior, which is very festive and colorful, opened on Thursday, the drive-thru won’t be ready until about mid-week.

The award-winning Mr. G’s has been a favorite of locals since it opened in 1962, with a reputation across the U.S. I’ve heard many customers have been eagerly waiting for it to reopen, and it was packed when I dropped by on Thursday.

And we have even more new food options, with the opening of several new restaurants and food trucks. The Wicked Taco opened its doors at 11242 S. Foothills Blvd., Suite 11, in the Foothills Village Shopping Center.

It serves street tacos, but indoors. They have the typical tacos, including carne asada, fish, shrimp, as well as flautas, quesadillas, rice, beans and more. And the menu will soon be expanding and offering breakfast.

Yuma native Raquel Herrera, who owns the restaurant with Lucy Adair, said they wanted a “taqueria” with a relaxing “chill vibe.” That explains the reggae music playing on the sound system!

Also, all sorts of interesting masks cover one wall, and customers are invited to bring their own masks to go up on the walls.

After retiring from 25 years as a police officer, Herrera craves a stress-free environment. That’s why she opened the Babe Cave, which is two doors down in Suite 14, a year ago. She wanted a place where she can “work things out” without feeling uncomfortable. Now she strives to offer women a gym where they can feel safe and not intimidated.

She met Adair, owner of Blue Skies Home Care Services, at the Babe Cave. When the owner of Kountry Kitchen died and the family offered to sell them the restaurant, they jumped at the chance.

Both women thank their husbands, Sajid Herrera and Burdell Adair, for doing much of the heaving lifting when it came to remodeling the restaurant.

Some people might recognize Rob’s Roadhouse Grill, which opened two weeks ago at 12585 S. Frontage Road, next to the Trading Post. Rob Schot ran Rob’s Grill on Fortuna Road for 14 years before he went to Idaho to run a bar in late 2017.

He’s now back in Yuma and instead of opening a restaurant, Schot opted to set up a food truck. This way he can prepare and cook all the food himself and keep customers happy, he said.

Rob’s specializes in Alaskan cod and offers all kinds of burgers and hot and cold sandwiches. “We have the best Reuben around,” Schot said.

He doesn’t use preservatives and all water runs through a reverse osmosis system. He’ll show you the crystal clear ice cubes if you ask.

As an interesting side note, Schot is an immigrant from the Netherlands who arrived in the U.S. when he was 5 years old. “It’s the American Dream,” he said.

Rob’s Roadhouse Grill is open every day from 11 a.m. to whenever the customers stop coming. He plans to stay open year-round. To order carryout, call 928-287-6059.

Not too far from there is the newly opened Azar’s Gyro Station and Deep Fried Haven, 12557 S. Frontage Road. Owner Joey Azar specializes in gyros, in the form of a sandwich as well as other ways, such as nachos, fries and salads.

The Deep Fried Haven side of it offers deep-fried lasagna, Philly cheese steaks, pizza and even pickles fried in funnel cake batter. Azar’s also has deep fried sweets made of Oreos and candy bars such as Snickers and Milky Way.

Can’t decide? Try the Haven Sampler, which has a little bit of everything.

Azar grew up in the gyro business, working the fair and festival circuit in Washington. He would stand on a stool by the oven and bake the bread. When he decided to strike out on his own, he picked Yuma because it “didn’t have too many options,” he noted.

And here is Yuma’s Commercial Construction Project Update for this week:

And that’s it for now! If you know of a new business that has or will be opening, relocating or closing, please let me know at mknaub@yumasun.com.

I get a lot of messages asking questions, which I welcome, but I can’t personally answer every question. If I find the answer to your question, I will answer it in the column. I appreciate the readers who always act as my eyes and ears. Thank you!