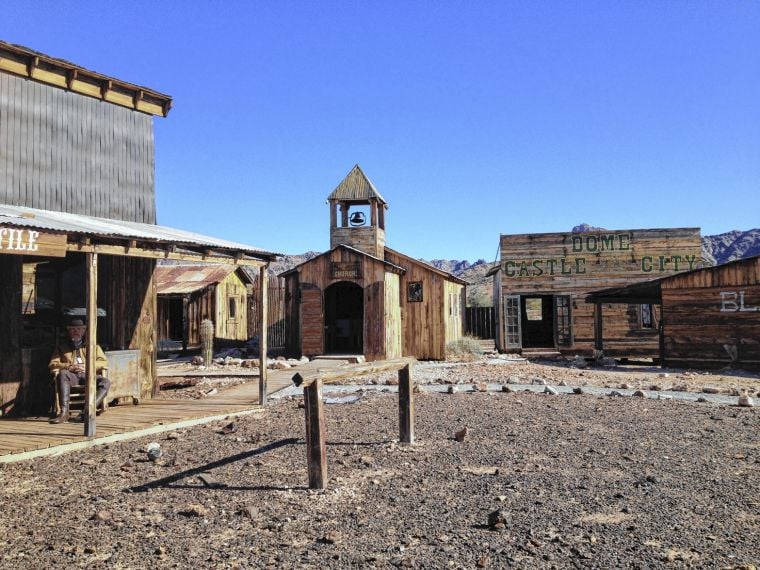 Castle Dome Museum has more than 50 buildings, either restored or reconstructed. The church has six pews, stained glass windows and a pipe organ and a working bell. 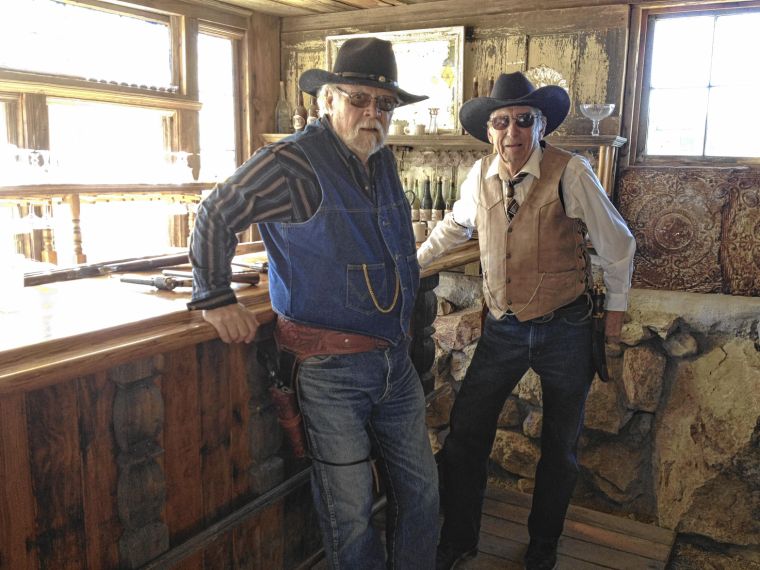 Harold McGlothin (left) and Gene Pleas take a break before their next reenactment performance outside the Flora Temple Bar at the Castle Dome Museum. The men bring to life a 1898 shooting between Ramon Ayala (played by McGlothin) and Manuel Sentaural (Ple 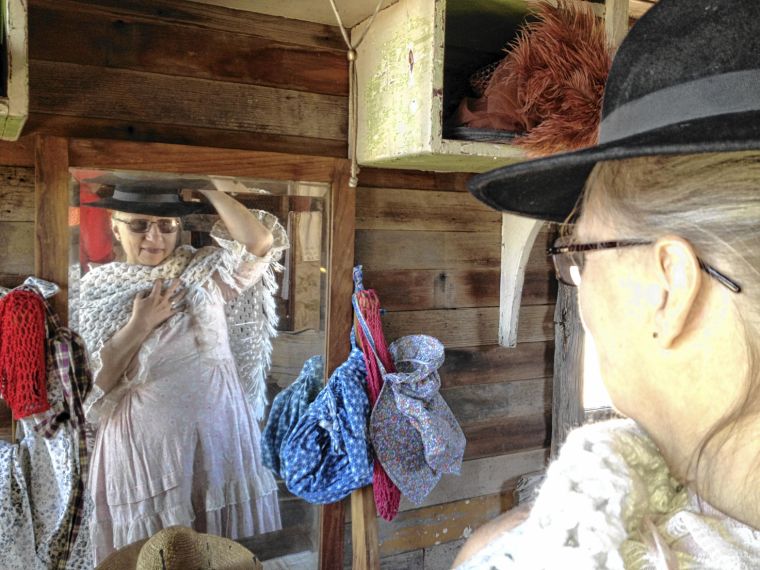 Re-enactor Susan McGlothin tries on hats in the Castle Dome Museum dress shop, which includes the wardrobe of a woman who entertained the miners.

Castle Dome Museum has more than 50 buildings, either restored or reconstructed. The church has six pews, stained glass windows and a pipe organ and a working bell.

Harold McGlothin (left) and Gene Pleas take a break before their next reenactment performance outside the Flora Temple Bar at the Castle Dome Museum. The men bring to life a 1898 shooting between Ramon Ayala (played by McGlothin) and Manuel Sentaural (Ple

Re-enactor Susan McGlothin tries on hats in the Castle Dome Museum dress shop, which includes the wardrobe of a woman who entertained the miners.

A history buff, Allen Armstrong once said to his wife, “Wouldn't it be cool to own a ghost town?”

Later, at a gas station in 1993, he asked the attendant, “Know of any ghost towns around here?” The attendant pointed to a man sitting nearby. It turned out the man owned the property that is Castle Dome City, an abandoned mining town northeast of Yuma, off Highway 95.

“Two weeks later, we had the title,” Armstrong noted.

Why a ghost town? “We love history. We wanted something to do with history,” he explained.

He also wanted to honor the “entrepreneurial spirit of our forefathers. They could turn nothing into something. They were rugged individuals and immigrants. That was how the country was founded. There is a legacy there.”

After acquiring the property, Armstrong and his wife, Stephanie, an anthropologist, set about to preserve the old mining town. They doubled their efforts when they learned that the adjacent Kofa National Wildlife Refuge intended to destroy the ruins.

The Armstrongs requested time to move everything onto their 26 acres. The government gave him two weeks, which ended up being three years. Armstrong did not complain.

The result today is a time capsule of an old Arizona mining town, a chance to see what everyday life was like in Castle Dome City, established in 1864.

Visitors can also learn about the town's notorious history, including shoot-outs over prostitutes, the violent acts of desperados and drunken knife fights between miners.

That Old West may be gone, but Armstrong and his wife are preserving that part of Arizona's history.

“I call it the Titanic find,” he said, referring to the remarkable condition of the artifacts.

After acquiring the property, he rappelled down the mining shafts and discovered a bounty of historical treasures. Some looked like the miners, who mined galena, a combination of silver and lead, had just left, leaving behind personal items, tools and equipment.

They are in the process of cataloguing the thousands of items they have in their collection. It included one of the oldest Levi's, with no belt loops (they were held by suspenders), one back pocket and candle wax drippings. Armstrong has been told they are worth $40,000.

The museum is home to the world's largest silver brick, which weighs 250 pounds, and several collections of 19th century glass bottles. There are matchsticks that still strike, legal documents, handwritten notes and pieces of tent canvas, a rarity in the desert.

About 70 percent of the artifacts come from the original site; others were acquired from somewhere else, such as the collection of 1,100 lighters, or through donations.

Visitors are welcome to explore the more than 50 buildings, either restored and re-created. The museum has five saloons because the old town had five saloons within a mile.

There are mills, a mercantile store, dentist's and doctor's offices, a photographer's studio, sheriff's office, bank and schoolhouse, as well as shops essential to life in the Old West, such as a machine shop, saw shop, blacksmith shop and dress shop.

Overnight guests have stayed in the top level of the two-story hotel, which has a porch and spectacular views of the Castle Dome peak and the surrounding mountains.

The church, which has six pews, stained glass windows and a pipe organ, has hosted weddings. Both the church and schoolhouse have working bells.

Castle Dome City has several claims to fame. It is home to the oldest mining district in Arizona and the longest-working mine in the state.

Col. Jacob Snively, after serving as secretary to Texas President Sam Houston, followed the trail left by the Spanish conquistadores and discovered their old mine workings.

In the 1660s, the conquistadores worked the mines before abandoning them. A revolt by the enslaved Native Americans and consequent slaughter of the Spanish miners might have had something to do with it.

Snively began Castle Dome Mines in 1862, the second patented in Arizona. By the 1880s, Castle Dome City's population of 3,000 exceeded that of Yuma's. The mines operated from 1862 to 1979, when silver prices plummeted and they shut down.

Castle Dome Mines also built the largest wagons in the world. With teams of 20 to 40 horses or mules, the wagons hauled the ore 20 miles away to the Colorado River, where steamers took it to San Francisco.

The mines prospered during both world wars, when the lead they mined supplied U.S. ammunition factories.

Visitors may also be treated to re-enactments, bringing the people who once lived there to life. One re-enactment is a 1898 shooting outside the Flora Temple Bar, where Ramon Ayala (played by Harold McGlothin) accused Manuel Sentaural (Gene Pleas) of stealing his silver. Ayala shot Sentaural and ran off, never to be seen again. Sentaural ended up in the graveyard, which visitors can also tour.

In Carmelita's Cantina, storyteller Mary Lou Pleas, in costume, tells the story of the jealous Juan Lego, who was killed by a dark stranger in a dispute over his “woman” Rosita.

Terry Howell takes it easy on a rocking chair outside the mercantile store, while Sharon Saunders waits for the dentist and Susan McGlothin tries out hats in the dress shop.

Visitors also have the chance to do their own re-enactment by following the script of a real-life shoot-out.

The museum is divided into two sections: the ghost town, which has the majority of buildings, and a self-guided walking tour through the mining district, which includes mining shafts, first cabin site, bunkhouse, post office, shoe shop and graveyard.

“When people come, they're surprised. They think it's going to be a building or two, but you could spend the whole day here,” Armstrong said.

He recommends exploring the ghost town in the morning, having lunch at one of the picnic areas and then taking the walking tour, or dividing the visit into two excursions.

Soon there will be even more to explore. The Armstrongs are working on areas that represent other eras — the '50s, '60s and '70s — to preserve Castle Dome's entire history.

Mara Knaub can be reached at mknaub@yumasun.com or 539-6856. Find her on Facebook at Facebook.com/YSMaraKnaub or on Twitter at @YSMaraKnaub.