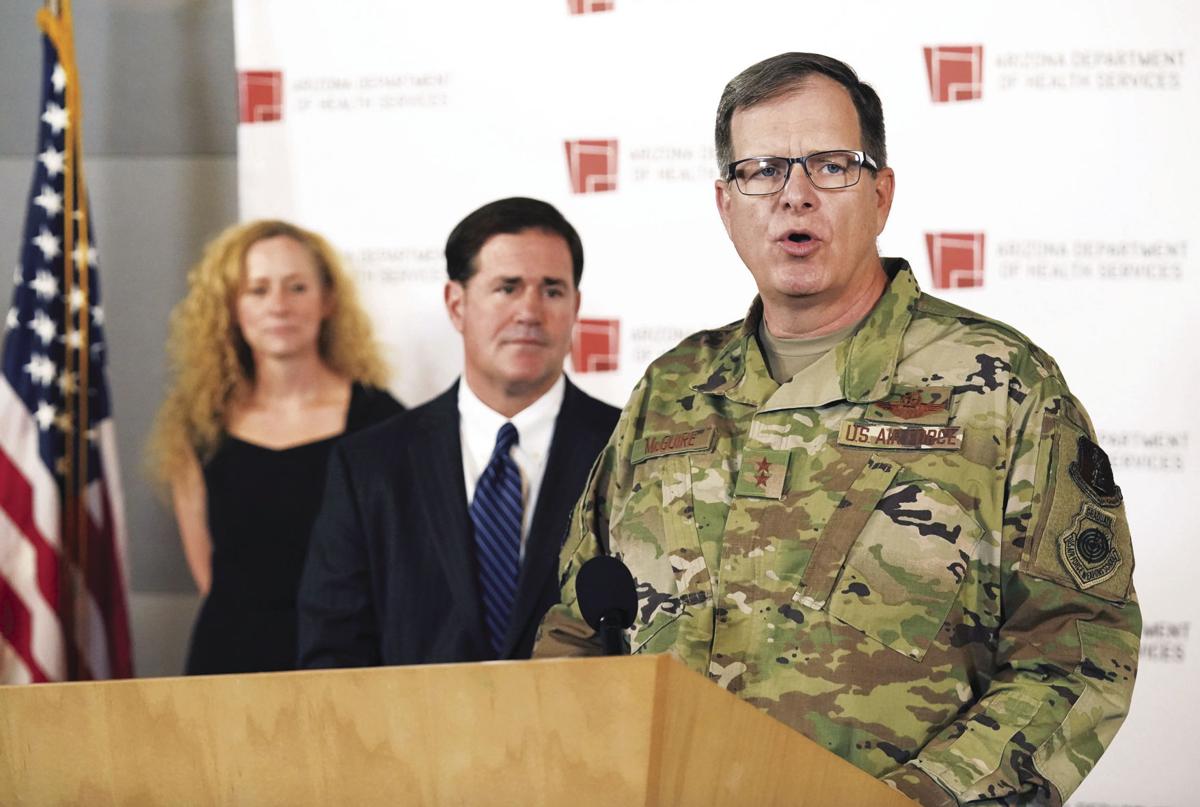 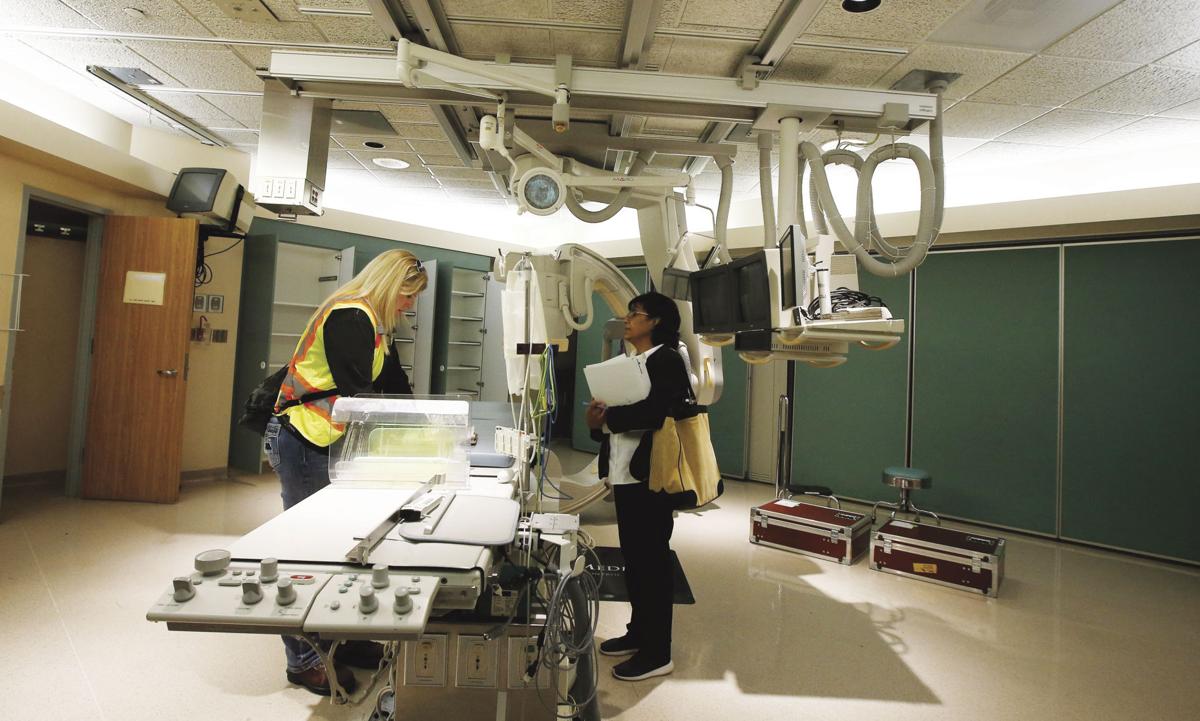 Mary Azelton (left), resident engineer of the project from the U.S. Army Corps of Engineers, and Susie McCann, from the Arizona Department of Health, tour the currently closed St. Luke's Medical Center hospital to see the viability of reopening the facility for possible future use due to the coronavirus Wednesday in Phoenix.

Mary Azelton (left), resident engineer of the project from the U.S. Army Corps of Engineers, and Susie McCann, from the Arizona Department of Health, tour the currently closed St. Luke's Medical Center hospital to see the viability of reopening the facility for possible future use due to the coronavirus Wednesday in Phoenix.

PHOENIX — The number of Arizonans diagnosed with — and dying — from COVID-19 will continue to increase for at least the next month, the state’s chief health officer said Wednesday.

“We believe that the peak of our illnesses will start mid- to end of April, with peak hospitalizations in May,’’ Dr. Cara Christ said. “That’s what we are trying to get ahead of.’’

Put simply, she said, the surge will be “above and beyond our current capacity of beds.’’

Christ, however, said she could not provide actual estimates of how many Arizonans eventually will be infected with COVID-19, whether they need medical care or not, nor how many will die. Aides said her agency has not prepared any state-specific models.

To date, Christ said there have been 401 confirmed cases in 11 of the state’s 15 counties, including six deaths.

The pronouncement about the upcoming peak — the first time Christ has sketched out the anticipated depth of the problem in Arizona and how short Arizona is likely to be of hospital beds — comes as the health director sent a letter to all hospitals in the state urging them to activate their “facility emergency plans’’ that each is supposed to have.

She specifically wants hospitals to:

• Implement new triage processes in their emergency rooms to better separate the cases that need more immediate attention from injuries and illnesses that can wait;

• Identify additional space they have in their facilities — beyond actual rooms — where they could “take on an additional surge in patients;’’

• Cross-train staff and medical volunteers to take on additional duties;

• Come up with plans for how they will allocate scarce resources;

• Look to put more than one person in single-patient rooms.

Christ said the state also is working with the military to create additional bed capacity.

“The Army Corps of Engineers is currently on site evaluating our alternate care sites, including preexisting hospital sites to add additional beds to “large venues that can provide many beds in a step-down or recovery care environment for those ready to leave the hospital but unable to go home.’’

And Christ repeated a prior announcement that she has asked for two field hospitals for Phoenix and one for Tucson.

Christ also sent a separate letter to doctors, much of that urging them to find ways to conserve “personal protection equipment’’ like gloves, gowns, face shields and medical/surgical masks.

“There are shortages, and we need to move toward reuse, extended use, and alternative sources of PPEs,’’ she wrote.

One of these is to essentially group together patients with similar symptoms.

For example, she said, some clinics are examining respiratory patients only during certain afternoon hours. That also means they can keep using the same gowns and masks, changing out only their gloves.

It’s not just that kind of equipment that is in short supply.

“The current reality in Arizona and the rest of the country is that there are not enough available supplies (of kits) to meet testing demand,’’ the health director told doctors. In fact, she wants them to stop using this test as a diagnostic tool, instead simply treating all patients with respiratory conditions with the presumption they do, in fact, have COVID-19.

And there’s something else Christ said they can do: see as many patients as possible through telemedicine.

That dovetails with a separate executive order Gov. Doug Ducey issued Wednesday requiring health insurers to pay for procedures done through telemedicine that normally would be covered for an in-person visit.

According to the governor’s office, this will help ensure that Arizonans who are sick or under quarantine can access care from their homes and avoid potentially risky trips to the doctor or other health care provider.

“It’s commonsense and helps ensure our most vulnerable continue to have access to care in a way that protects them and public health,’’ the governor said in a prepared statement.

The directive, which continues until Ducey rescinds the state of emergency he implemented earlier this month, covers all electronic methods of delivering healthcare. That can include both telephone and video calls.

Potentially more significant, it ensures that doctors are not disciplined by regulatory boards for failing to conduct an in-person examination of a patient before issuing a prescription. But the governor spelled out that nothing in his order allows medical providers to do anything they were not otherwise permitted to do prior to the emergency declaration.

During the wide-ranging news conference about the virus, Ducey also defended his decision to issue an executive order forbidding local officials from shuttering certain types of businesses and services he considers “essential.’’

“I share their concern on what’s happening with coronavirus,’’ he said. But the governor said there are other considerations behind his order.

“I want to make certain that our state is speaking with one voice, that there’s clarity out there and not confusion,’’ Ducey said. The alternative, he said, is “a patchwork of directives,’’ with different rules in cities that may abut one another.

“We want to make sure citizens understand what the guidance is, what’s safe, what’s required of them and what’s most important,’’ the governor said.

Ducey also brushed aside questions, many raised by mayors, about why he considers golf courses, playgrounds and personal-care facilities like spas and massage parlors to be “essential’’ — and beyond the reach of mayors.

“Our directives have been in guidance with the CDC, the NIH (National Institutes of Health) and the Arizona Department of Health Services,’’ he said.

Christ, for her part, sidestepped questions about whether people should still have their hair cut or go in for a massage, situations in which people are closer than the six feet apart that state and federal health officials said should be the margin of separation.

“Our recommendation would be that individual social distance,’’ Christ said, without commenting on those specific activities.

“We will continue to evaluate the data and make recommendations we feel will keep the public safe,’’ she said.

Except for a few afternoon clouds, mainly sunny. High 71F. Winds WNW at 5 to 10 mph.

Sorry, there are no recent results for popular images.