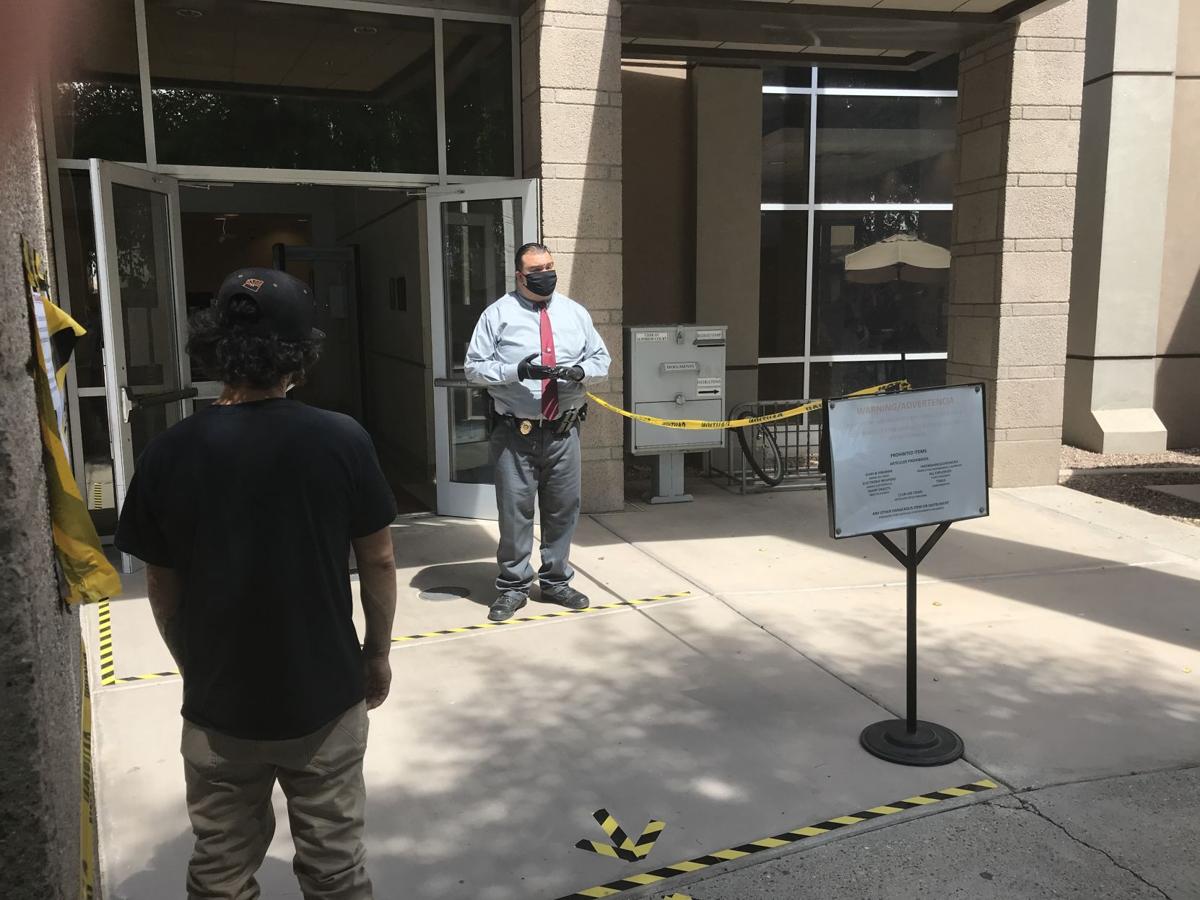 Anyone visiting the Yuma County Justice Center is now required to wear some-type of face covering, This can include a non-medical grade face mask, a scarf, bandana, handkerchief, or a homemade cloth covering, provided the wearer’s mouth and nose are covered. 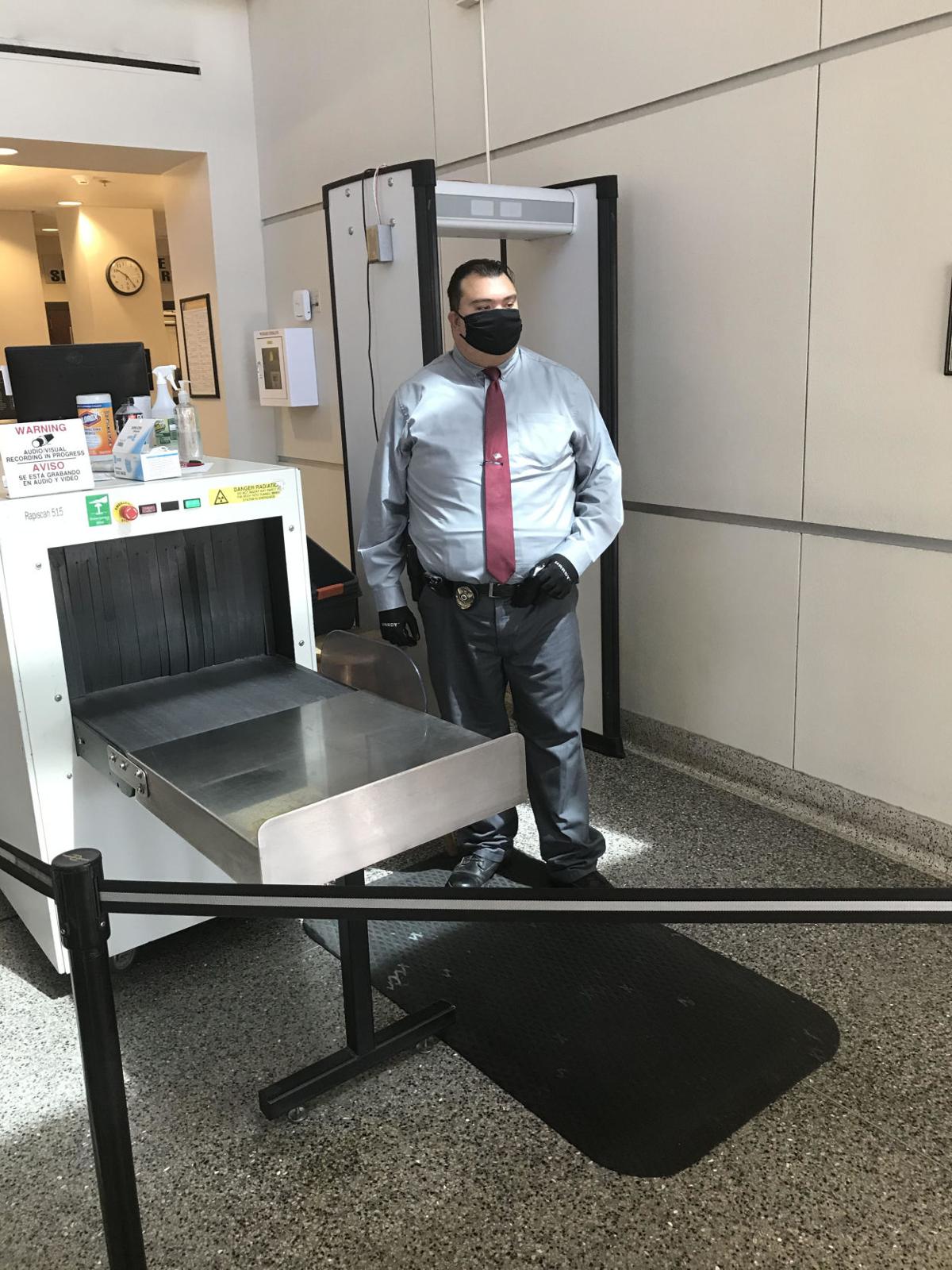 Court security staff will also be asking anyone coming into the building a series of three health-related questions before they are allowed inside.

Anyone visiting the Yuma County Justice Center is now required to wear some-type of face covering, This can include a non-medical grade face mask, a scarf, bandana, handkerchief, or a homemade cloth covering, provided the wearer’s mouth and nose are covered.

Court security staff will also be asking anyone coming into the building a series of three health-related questions before they are allowed inside.

The Supreme Court of Arizona has issued several administrative orders since March 18 in response to the COVID-19 public health threat that limited and modified court operations throughout the state that are intended to keep staff and patrons safe from exposure to the virus.

Under the most recent guidelines jury trials were allowed to resume on June 15, but Yuma County Superior Court Judge David Haws explained that given the number of positive cases of coronavirus are still increasing in Yuma County, they probably won’t begin until the third week in July, but that could be pushed back.

“I had hoped to be able to start by that date, but if the number of infections continues to rise, we probably won’t start then either,” Judge Haws said.

In-person hearings have also been allowed to start back up, but on a limited basis. As such, the only people allowed to attend these hearings is the individual with case, no family members, friends or other supporters.

However, for the next few weeks at least, hearings will continue to be done by telephone and video conference as often as possible.

Defendants who are in-custody will still have theirs held remotely by video feed from the jail.

“We are still trying to reduce the number of those as much as we can,” Judge Haws said. “We still want to keep the footprint of the number of people coming to the courthouse as low as possible. It is safer if we can do more hearings by video and telephone.”

Since courts are open to the public, the new guidelines also included a directive that established a July 1 deadline to develop ways that will allow for greater public access

For example, Maricopa County Superior Court is now streaming its hearings on a Youtube channel.

“We are looking into that, but we don’t have it set up yet,” Judge Haws said. “We are not doing anything behind closed doors or in secret. The things that have been done were for health and safety reasons.”

Anyone visiting the Yuma County Justice Center is now required to wear some-type of face covering,

This can include a non-medical grade face mask, a scarf, bandana, handkerchief, or a homemade cloth covering, provided the wear’s mouth and nose are covered,

Although the City of Yuma amended a proclamation that mandated residents wear masks in public earlier this month, the directive from the Arizona Supreme Court requiring their use went into effect on June 1.

Although the courthouse is not obligated to do so, masks will also be provided to patrons who don’t have one upon their arrival. The courthouse currently has 1000 masks available and will give them out as supplies permit. More will be bought, if and when it becomes necessary, provided they can be obtained.

Additionally, court security staff are required to wear a face mask and gloves when screening patrons as they enter the building.

As part of that screening process, court security staff will be asking anyone coming into the building a series of three questions.

Those questions are: Have you been exposed to anyone who has tested positive for the COVID-19 virus? Do you have a cough? Are you experiencing a shortness of breath or difficulty breathing?

Anyone who answers “yes” to any of the questions will obviously not be allowed inside the building, and will be given information on what they must do to contact the court.

All courthouse employees also have to wear a facemask in areas where they interact with the public.

They are also required to conduct a self-screening health check on themselves each morning before coming to work.

Much like courthouse patrons, if they are showing any signs of illness they may not come to work.

“I have a thermometer and I take my temperature every morning to make sure I don’t have a fever,” Judge Haws said. “It is kind of an honor system. We aren’t going around taking everyone’s temperatures at their desks.”

Judge Haws added that he wants people to know that when they do come to the courthouse, or if they are summoned in as a potential juror, or to serve on a grand jury, they are coming to a safe place.

Some of the ways of doing that which are being discussed is seating jurors further apart during trials or maybe installing plastic shielding between their chairs.

Judge Haws said he expects the guidelines to remain in place for the foreseeable future and the court will continue to follow recommendations from health officials as well as any directives issued by the Arizona Supreme Court.

YUMA COUNTY CASES BY THE NUMBERS

Yuma County’s total nu,ber of positive COVID-19 cases here is 7,332, according to the county’s July 5 update, and there have been 97 deaths. There were 270 new cases reported.

Here’s a look at Yuma County Cases By The Numbers: