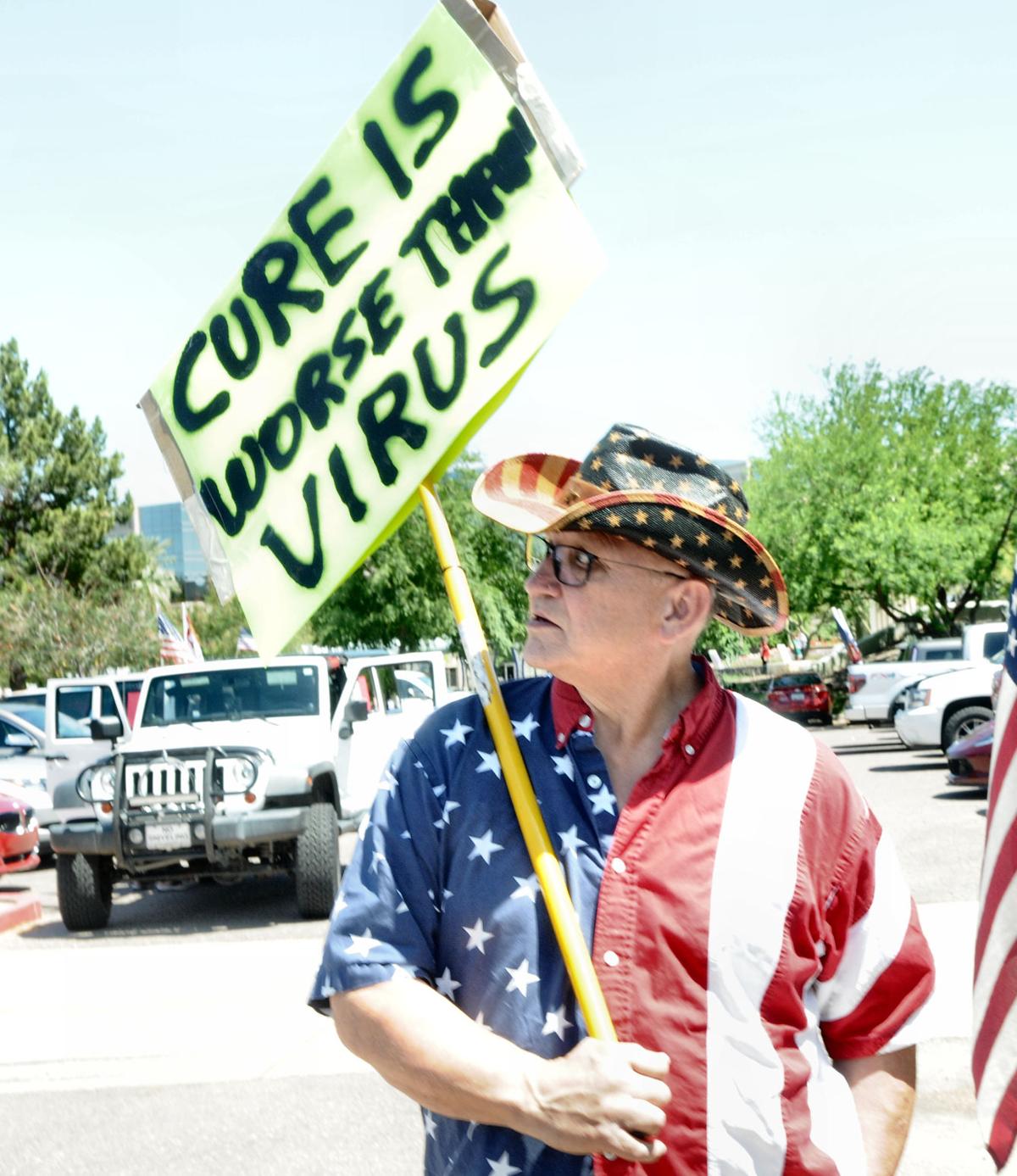 John Suprock carries a sign at Monday’s protest at the Capitol. 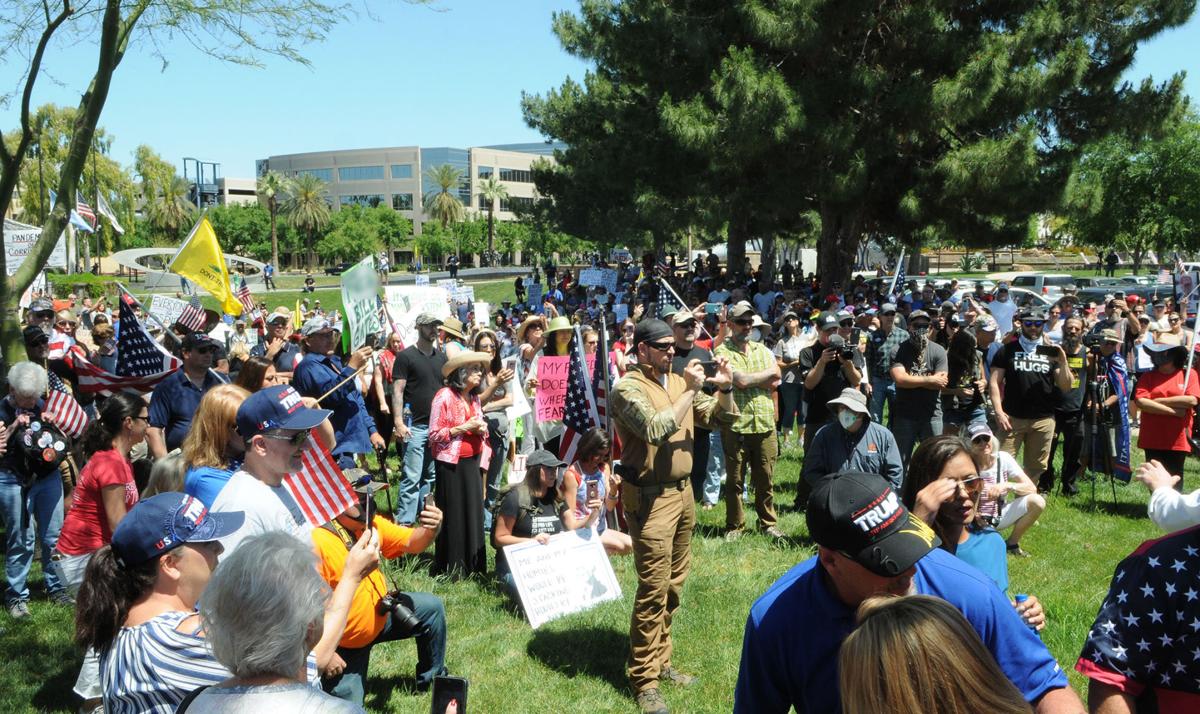 Demonstrators gather Monday across from the state Capitol to protest orders by Gov. Doug Ducey closing non-essential businesses and telling people they have to stay home unless they are engaged in some permitted activity. 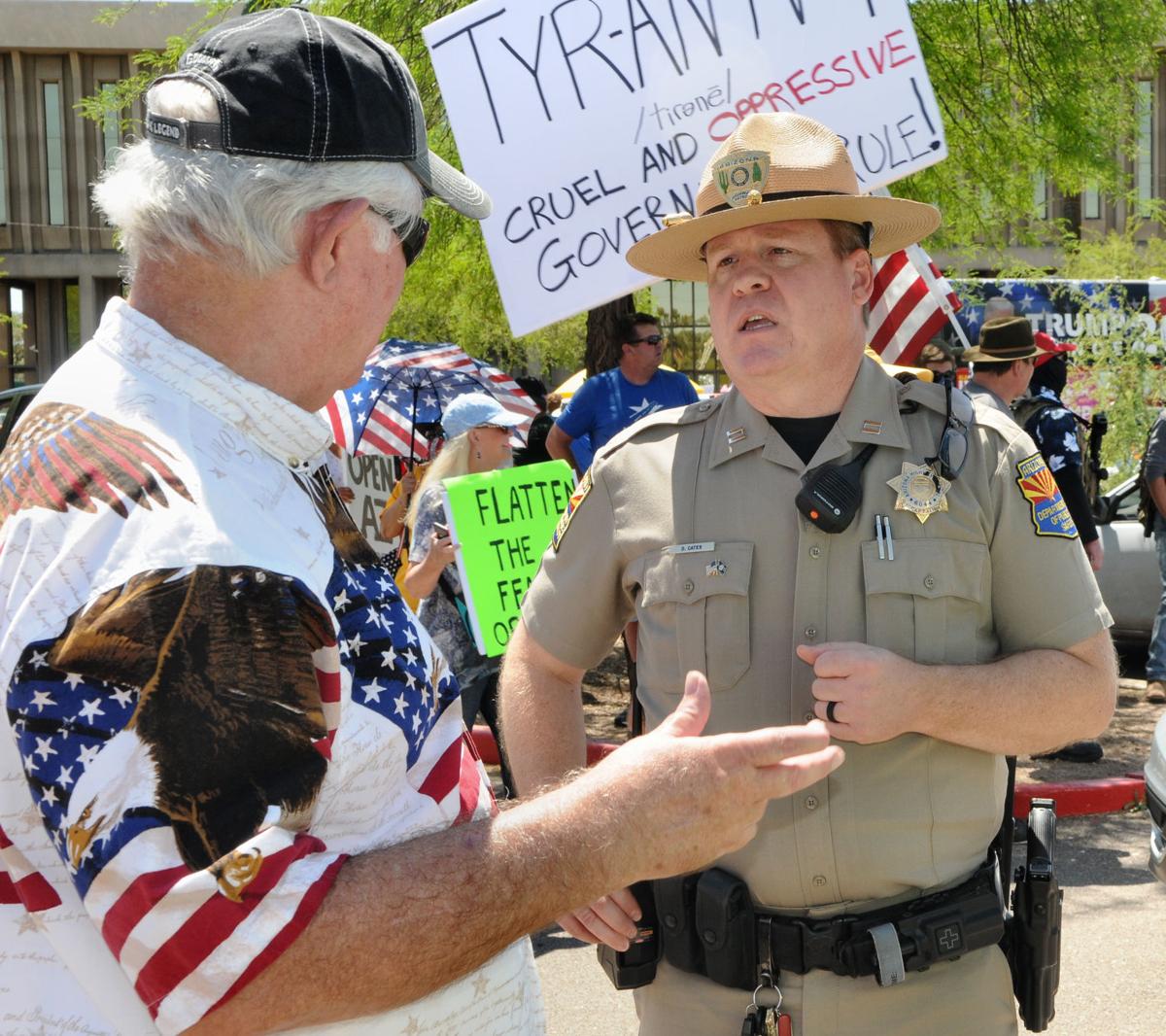 DPS Capt. David Cates explains to a protester Monday why a converted fire truck with a loudspeaker was operating illegally because a permit had not been obtained ahead of time. 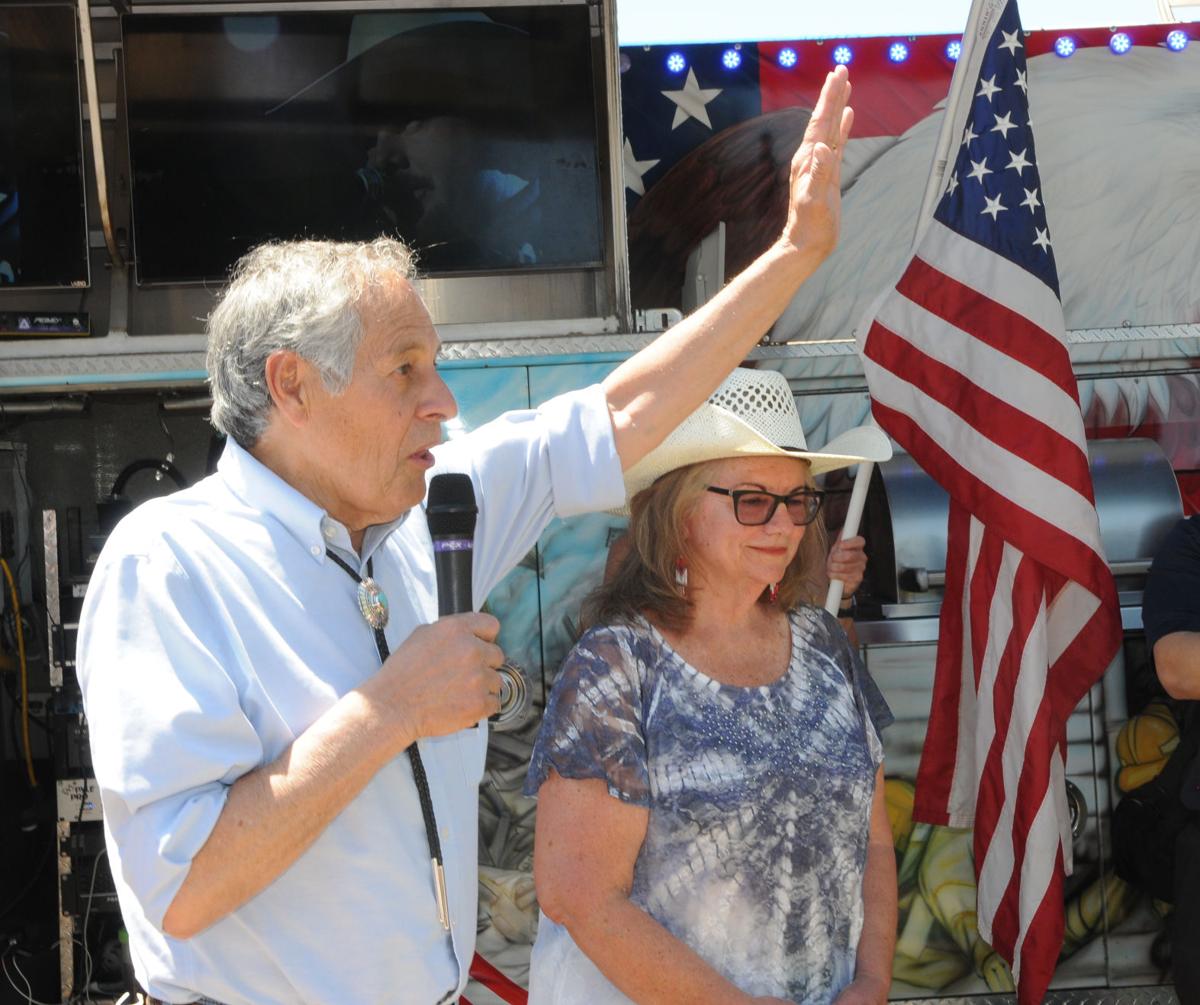 John Suprock carries a sign at Monday’s protest at the Capitol.

Demonstrators gather Monday across from the state Capitol to protest orders by Gov. Doug Ducey closing non-essential businesses and telling people they have to stay home unless they are engaged in some permitted activity.

DPS Capt. David Cates explains to a protester Monday why a converted fire truck with a loudspeaker was operating illegally because a permit had not been obtained ahead of time.

PHOENIX — Hundreds of protesters gathered at the Capitol Monday — virtually none wearing masks — to object to orders by Gov. Doug Ducey requiring people to stay at home and closing what he says are non-essential businesses.

The event drew people with signs and complaints about everything from gun rights to whether boys should be circumcised. And there were dozens promoting the reelection of President Donald Trump.

But the common thread was a belief that the fears of COVID-19 are overblown, the governor’s orders are damaging the economy — and that all this is part of a liberal and media-fed agenda.

“I love our country and I love our Constitution and I love our flag, and I love freedom, liberty and the pursuit of happiness,’’ said Jamie Jacobs of Scottsdale, dressed in red, white and blue and carrying an American flag.

“And I feel that’s being tread on right now,’’ she said. “There’s a bigger agenda going on.’’

Lynn, who said she was from Tucson but provided no last name, said she was there because she believes “Arizona needs to be reopened.’’

“We’re going to be hitting 90 (degrees) later this week,’’ she said. “I just read an article in USA Today that sunshine does kill the virus.’’

John Suprock, dressed in his own American flag shirt, had his own take.

“I think the media has overblown the true virus issue,’’ he said.

Suprock, carrying a sign saying “Cure is worse than the virus,’’ said original estimates were that 2.4 million people would die in this country. Now, he said, the figure is likely to be fewer than 60,000, “which is less than the flu in a typical year.’’

And he brushed aside the claim by Ducey that his orders have kept the number of deaths from getting higher.

“There’s no way for either side to prove that because there’s no control group,’’ Suprock said. “So if I was a politician I would probably say the same thing.’’

In a prepared statement, gubernatorial press aid Patrick Ptak said those in the Ducey administration “appreciate the passion expressed by Arizonans today, and we share their desire to get back to normal as quickly as possible.’’

But Ptak made it clear that his boss wasn’t going to be blamed for taking his actions in a vacuum. He said the governor, in making his decisions about closures and stay-at-home orders, has been working with others — including those that some of the protesters clearly like.

“Gov. Ducey is working closely with President Trump, Vice President Pence,’’ Ptak said, along with Dr. Anthony Fauci and Dr. Deborah Birx, both advisers to the president. He also said that Ducey is working with state Health Director Cara Christ “and state, local and federal health experts to implement the latest guidance from the CDC and the White House,’’

And Ptak said that Ducey has “a commitment to re-energizing our economy when it is responsible to do so.’’

But Daniel McCarthy, a Republican hoping to unseat incumbent U.S. Sen. Martha McSally, said he’s not accepting the governor’s contention that his orders are necessary to reduce the number of people contracting the virus.

“When did we start trading a virus for our civil liberties,’’ he said, saying there are “almost 200 pandemics on average a year.’’ And McCarthy said that cancer kills 600,000 people a year.

“And it doesn’t shut down our economy,’’ he said. Nor was he dissuaded by the fact that cancer, unlike the virus, is not contagious.

“Cancer is something that’s hereditary, right?’’ McCarthy said. “So should we stop procreation because of the fact we could have cancer deaths?’’

He said all this is part of the “goal of the Left.’’

And what of the role of Ducey in issuing the orders?

“The Left and the Right work together,’’ he continued. “The parties are broken.’’

Ducey is likely to face continued protests, with organizers saying they intend to come back every week until he lifts his orders.

“We hope that Gov. Ducey will open Arizona now,’’ said Sen. David Farnsworth, R-Mesa. “But I agree, if we have to come back we’ll come back with 10 times as many people.’’

Department of Public Safety officers mostly stood aside, though Capt. David Cates did tell one of the organizers that the converted fire truck blaring music and being used for public address was in Wes Bolin Park, across from the Capitol, illegally because no one had first obtained a permit from the Department of Administration. Despite that, DPS took no action to move the truck or even shut down the amplifiers before the protesters moved on to march on the Capitol.

One of those who spoke to the crowd was Dan Mazon.

He is the owner of a Winslow jewelry store who was cited for failing to close as a non-essential business. Mazon contends he was operating as a department store because he also had other items, including some paper towels, and he had ordered some hay to sell.

“You don’t have to be afraid when somebody coughs,’’ he told the crowd. “It’s normal.’’

And Mazon said that the overall number of deaths from all causes is no higher than normal.

“So they’re just using this to manipulate us, to bring fear into people of the United States,’’ he said.