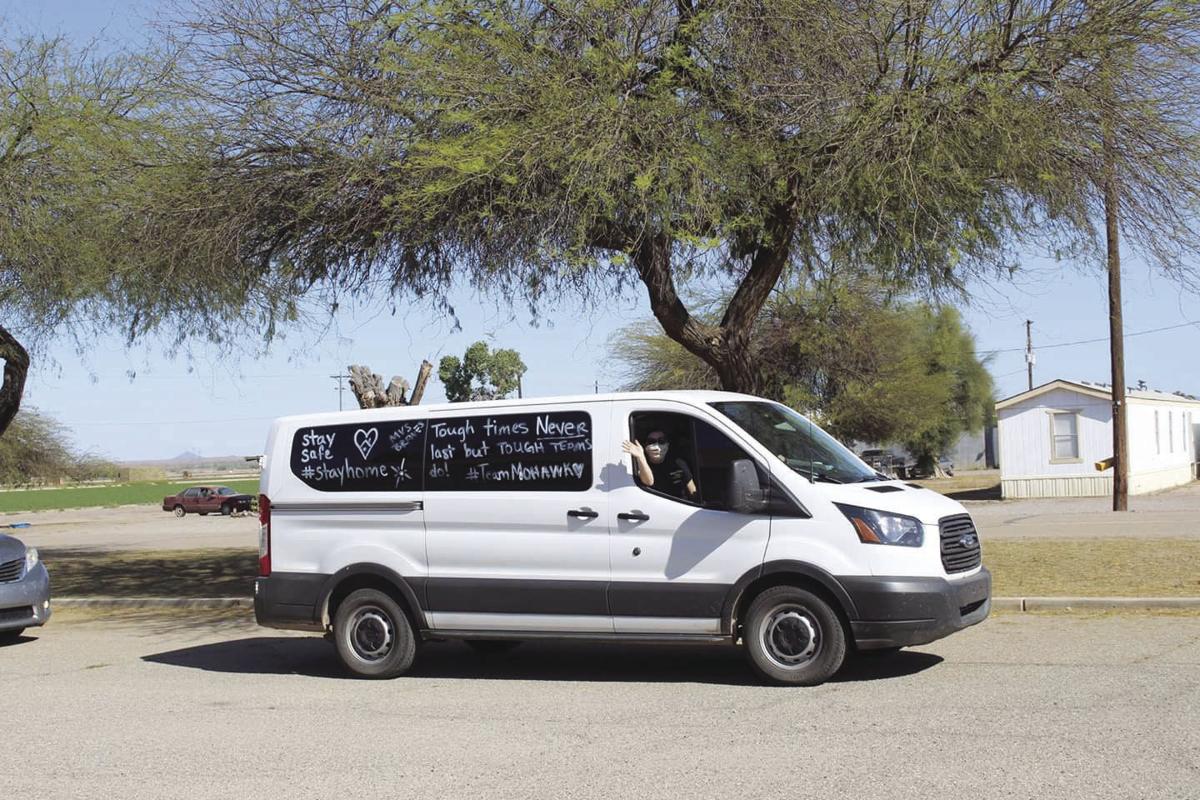 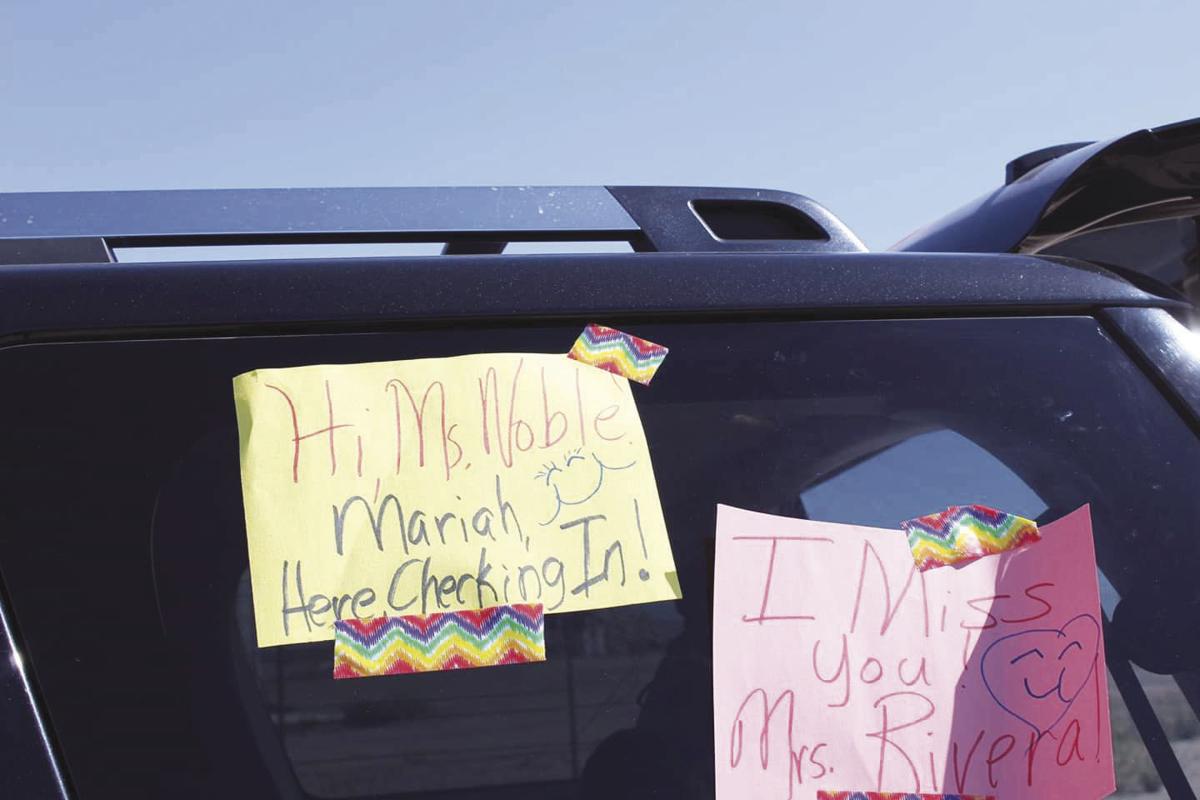 Homemade signs made by teachers at Mohawk Valley Elementary School to let the students along their April 7 "parade" route know how much their teachers miss and are thinking of them.

Homemade signs made by teachers at Mohawk Valley Elementary School to let the students along their April 7 "parade" route know how much their teachers miss and are thinking of them.

It takes a village, as the old adage goes, and Mohawk Valley School District has a particularly keen understanding of what that means. Since school closures were announced March 15 and extended March 30, the district’s administration, teachers, cafeteria workers and parents have banded together to ensure no child gets left behind.

“I am very, very proud of our teachers,” said Superintendent Shanna Johnson. “When you’re small like this, you know your families. The families we’d lost, we worked really hard to call, to ask a neighbor or a teacher’s aide...and we worked and worked until we reached them. We’ve been very persistent in that manner and if I have to say a ‘plus,’ that’s our plus. We all know each other, and that’s how our kids don’t get left behind. That’s the cool thing about a small school in a small town.”

And when you find a “plus” these days, you hold onto it because, according to Johnson, there’s a dose of “the good, the bad and the ugly” in all of it.

“That’s how you get through something like this,” said Johnson. “You just have to keep focusing on how we can improve and what lessons can be learned.”

When it comes to the delivery of virtual instruction, Mohawk’s teachers are “all over the board,” having become quite innovative to personalize the overall learning experience based on students’ needs.

To help students engage and keep up with their schoolwork, Mohawk has distributed computers as well as paper-based packets — which are being completed and returned on a steady rotation — because implementing technology-based learning with the younger grade levels has been “tricky.”

Another reason for this is some students simply don’t have access to the internet at home. Johnson said the district was promised 40 WiFi hotspots in Gov. Doug Ducey and Superintendent of Public Instruction Kathy Hoffman’s hotspot donation drive that kicked off earlier this month; however, those have not arrived yet.

“We had an email last week say they were on the way and then they fell off the radar,” Johnson said. “I have a feeling they’re going to come and we’re going to be done.”

Amid this, parents have risen to the occasion to improvise and “figure out” how to maximize the features of cellphones to get the homework done, inspiring new lesson plans for Mohawk’s return to campus in the fall.

“We tend to say ‘Phones are bad, put your phone away,’ but what we have learned is if you have a phone next year, we’re going to show you how to use that phone,” Johnson said. “We’re going to teach you how to get your email on that phone, because all of our students have an email (account) but we weren’t showing them how to use that. That’s definitely come to our attention, that some kids have an $800 device and they don’t know the capacity of what it can do for them.”

As for the teachers, Johnson said the abrupt transition to distance learning has been grueling work.

According to Johnson, Mohawk is serving between 90 and 100 meals a day, Mondays-Thursdays. These are distributed grab-and-go style on the Mohawk Valley Elementary School campus from 11 a.m. to 12:30 p.m.

There are some students, however, who aren’t able to retrieve the meals each day due to lack of transportation or distance, as a handful of Mohawk students live as far out as Dateland and Mohawk Pass. This, Johnson said, is just a minor complication; for students who can’t go to the school, the school goes to them, delivering meals and homework packets right to their doors.

“For a lot of those families, it costs too much gas to come all the way out here (to the school), and some only have one vehicle and Dad has taken it to work,” said Johnson.

In all, about 15 meal packages are delivered to various corners of East County each day.

There’s also an occasional “parade route,” which traverses about 105 miles as bus drivers, teachers and other Mohawk staff wave to their students and maintain some sense of connection during the separation.

According to Johnson, because the Mohawk Valley community lives such a quiet and uncomplicated life “out among the fields,” the effects of stay-at-home directives aren’t as hard-hitting and palpably felt.

“When you teach children out in the country, they move at a slower pace,” said Johnson. “It’s just laid back out here. One of the frustrations in a regular school year is pushing them along and getting a sense of urgency. But with this (closure) coming along, when you have kids that live outside the Mohawk Mountains, they’re isolated on a regular basis. I think it’s harder for them to understand what’s going on, because isolation is our way of life.”

However, there’s a level of connection that comes with being such a small, tight-knit school in which staff and students know one another on a personal level that’s sorely missed by all.

“I’ve had several parents tell me their child’s afraid that they’ll never get to come back to school again,” Johnson said. “They’re afraid they’re going to flunk, it’s so hard to convince them they won’t.”

While the closure has been difficult for everyone, it’s the teachers who are feeling the ramifications the most.

“Some days the teachers are almost in tears because they’re so sad,” Johnson said. “We teach because we love children, and they know which ones they’re worried about. I respond to them that kids are resilient and they’ll forget the feeling of this in a couple of years. It’s the teachers that are struggling more.”

A large part of this, which they discuss in depth in their weekly Zoom staff meetings, is not being able to see their students in a classroom every day like they’re accustomed to.

“We have kids who live in very good homes and we have kids who live in very poor conditions,” Johnson said. “So if Mom is a drug addict and has bad behavior, now the kids are exposed to that for four or five months on a daily basis. When they can come to school, they can leave that abusive, that dysfunctional home behind. School is normal and school is routine and school is safe. We know which kids those are and we’re doing our best to try and stay in contact with them.”

While it’s yet to be determined what the 2020-2021 school year will look like in terms of social distancing, Johnson’s position is firm.

“Here’s where I will stand solid with a statement: you can’t have six-year-olds in a first-grade classroom and expect them to be six feet apart and expect bus routes with one kid per seat, because that is just absolutely not feasible and you’d be running bus routes all day long,” she said. “That’s just not real. Or maybe you want 15 kids in a classroom — well, right now in the city they have 30, so are you going to double our school funding? I hardly think so. If you’re going to make demands, whoever makes those demands, you need to come see what’s real in a classroom.”

For the last five years, Mohawk has placed a heavy emphasis on cooperative learning; if those methods are forced to reconfigure due to social distancing directives, Johnson feels that her students won’t benefit from it.

“All the corporations and businesses have told us we need to be teaching our youth how to be cooperative,” she said. “And now because we’re afraid of a virus, we’re going to break that? How do you go back to school without connection, when everything I’ve ever learned and studied and felt successful at as an administrator is that we have connection and relationship? And sometimes that’s physical — sometimes that’s a fist bump or a hug or a handshake and a pat on the back. That’s all important stuff.”

Despite all of the looming uncertainties posed by COVID-19, Johnson is hopeful things will resume on a regular schedule this fall.

“I’m just going to believe that that’s going to be true until they tell me otherwise,” she said.