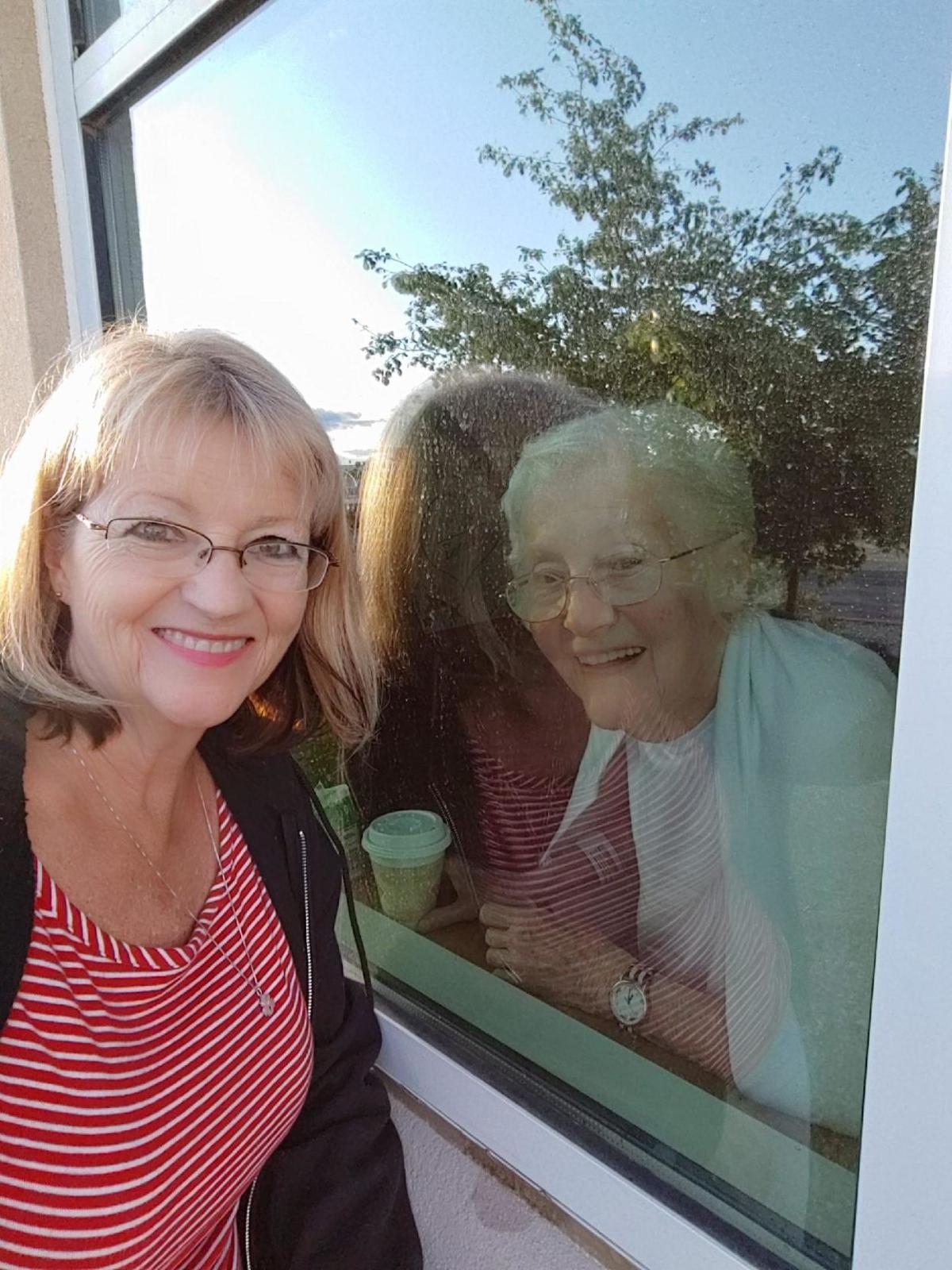 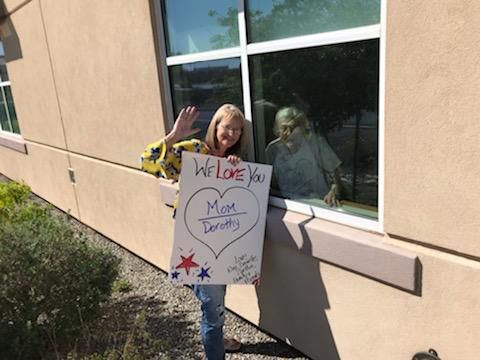 Cynthia Molphy Marshall shares a poster with her mother telling her she loves her. Her mother was a patient at Yuma Rehabilitation Hospital and unable to have visitors in person because of coronavirus COVID-19 restrictions. 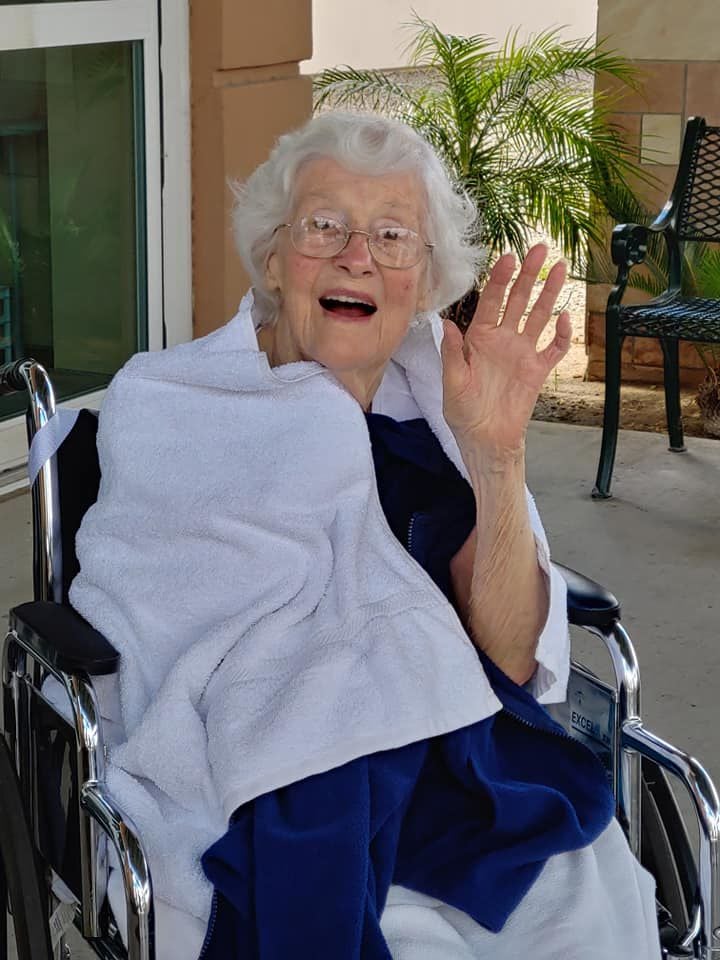 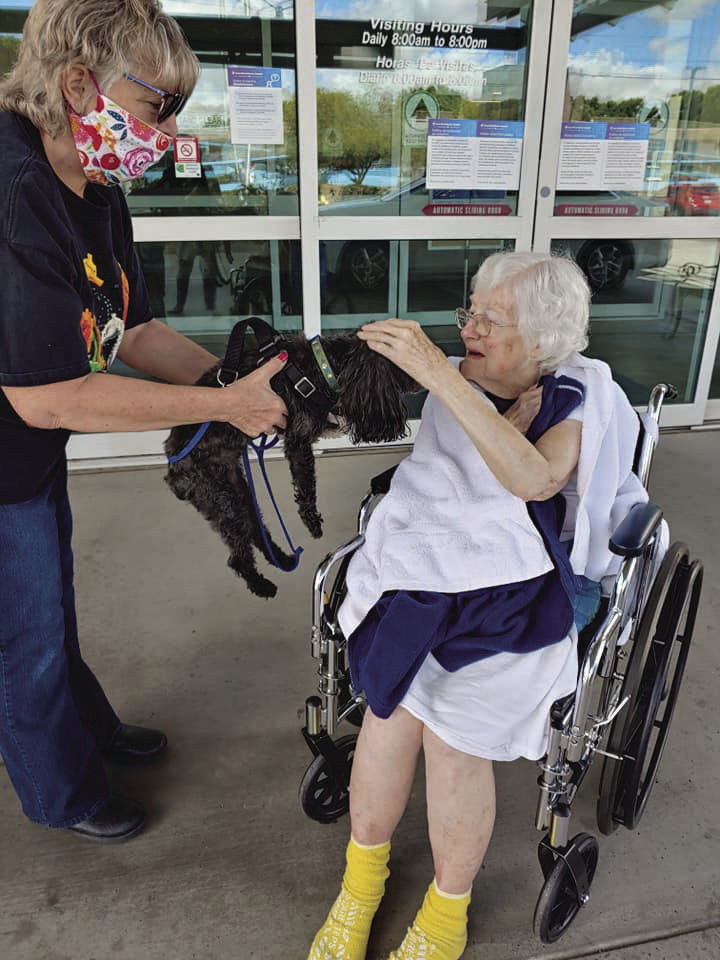 Abby, to see Dorothy Molphy as she was leaving Yuma Rehabilitation Hospital where she had been convalescing from a serious illness. Marshall is the sister-in-law of Molphy’s daughter, Cynthia Molphy Marshall. 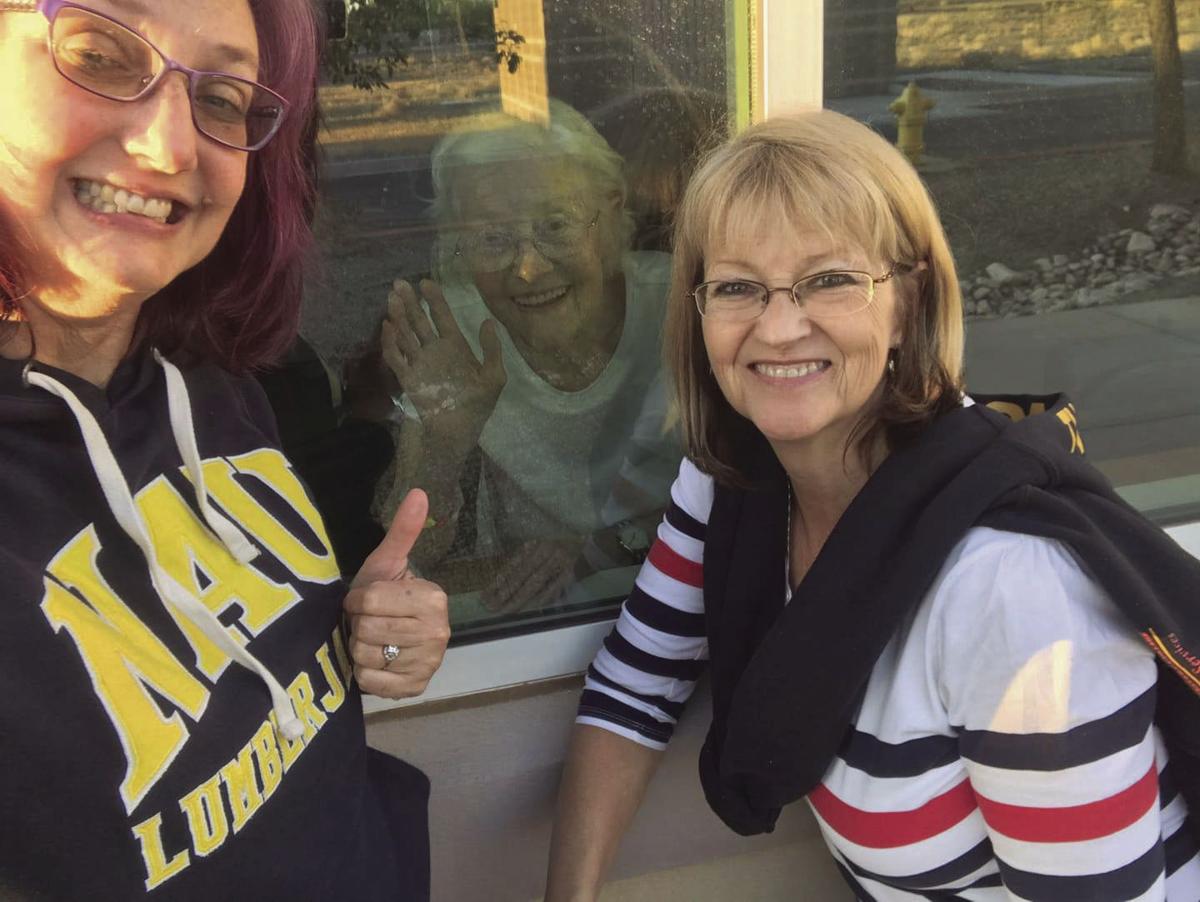 Cynthia Molphy Marshall shares a poster with her mother telling her she loves her. Her mother was a patient at Yuma Rehabilitation Hospital and unable to have visitors in person because of coronavirus COVID-19 restrictions.

Abby, to see Dorothy Molphy as she was leaving Yuma Rehabilitation Hospital where she had been convalescing from a serious illness. Marshall is the sister-in-law of Molphy’s daughter, Cynthia Molphy Marshall.

They had a window between them but the sight of her daughter through the glass brought joy and comfort to Cynthia Molphy Marshall’s mother as she convalesced at Yuma Rehabilitation Hospital after a serious illness.

“It was fantastic,” the 97-year-old Dorothy Molphy said of being to place her hand up against her daughter’s hand. “She came up to my window and placed her hand on the glass. It was almost like touching her. It was wonderful to able to see her and get that close. It made me feel so much better. It was definitely the highlight of my day. There were tears in my eyes when she left but I knew she would be back the next day.”

Molphy had been admitted to Yuma Regional Medical Center on March 29 with pneumonia and a UTI. Although she tested negative to COVID-19, she was in isolation and not allowed any visitors because of the hospital’s restrictions due to the virus.

“That is good to keep people safe,” said Marshall, who came to Yuma from her California home to be near her mother. “But admittedly it’s sad when it’s your mother. Isolation is very hard, especially when you’re sick.”

Driving over, Marshall acknowledged she feared the worst for her mother. “It’s a terrible feeling … it was my greatest fear for her to be alone with pneumonia.” And so for a time she remained in Yuma working from here so her mother knew she was at least in the same town.

Molphy said she’s quite sure knowing that her daughter was in town helped in her recovery. “It was a comfort to know she was here.”

But it was so much better after being transferred to the Yuma Rehab Hospital where she had a ground-floor room so her daughter could visit through her window.

Marshall would sometimes come alone, other times with her friend Lori Stofft and her friend’s daughter Mary.

“Visited my mom thru the window tonight with Lori’s daughter Mary. She was thrilled to see her and she especially loves her (bright red) hair!” Marshall wrote on Facebook April 7.

Other times Marshall and her friend brought posters to show Molphy through the window, telling her mother they loved her. “It was amazing what it did for her. We would go and she would be sitting by the window waiting for us. How powerful it was to be able to touch her through the window. We’re not meant to be alone.”

On April 11, Molphy was released from the Yuma Rehab Hospital to be transported back to her apartment at Emerald Springs.

“We were all able to see her,” Marshall said. “She didn’t know we were coming. She was overwhelmed. We had to maintain our distance and we couldn’t touch, but it such a joy to see her face-to-face. It was a wonderful moment.”

On Facebook she wrote: “What a glorious day, my mom went home today. We surprised her outside the Yuma Rehab Hospital and got to see her in person, of course, social distancing ourselves. Thank you for all your prayers!”

Once again, Molphy is isolated, now in her apartment at Emerald Springs and Marshall no longer is able to continue the “window visits.” But she is grateful for the contact she was able to have with her mother, for the care her mother received and her return to good health.

“When things open up, I’ll be back to help her get settled into her new apartment and be able to see her,” Marshall said. “How lucky I am … how blessed.”

On another note, Marshall said that YRMC has a link by which people can send virtual cards to loved ones and friends in the hospital. “The hospital is doing the program. It’s so wonderful.”