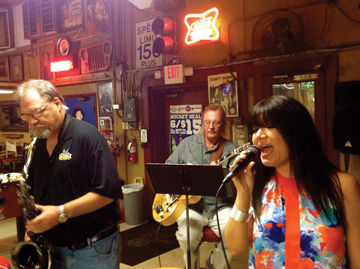 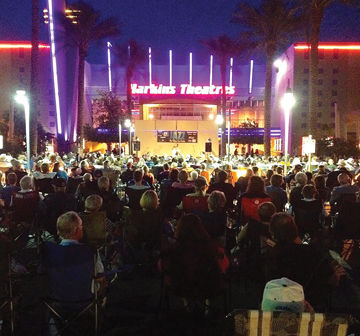 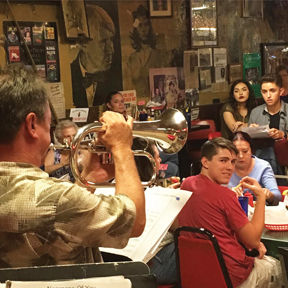 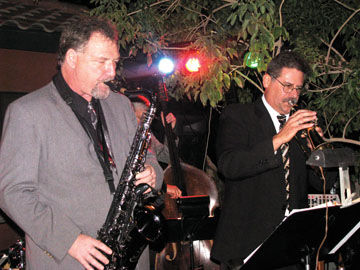 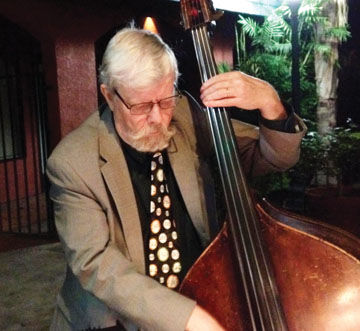 Yuma has seen a unique development for jazz music it seems, as an art form which typically thrives in a larger city has gained an ardent local scene and following.

According to Steven Hennig, a local musician who organizes various jazz series in Yuma, the music that is often called “America’s Art Form” typically has a hardy scene in more urban areas.

As Yuma seems to grow progressively larger in size and population, however, so too does the jazz niche seem to burgeon.

He explained that the quintet formed into a “highly regarded performance group” which made offering regular live events viable. The group consists of Hennig himself on trumpet, Brian Carlson on saxes, Carl Posch on guitar, Jon Knudtson on bass and Brandon Coz on drums.

Hennig says as the group performed regularly and recorded original CDs, they garnered national and regional reviews as well as a fan base.

Now, along with the quintet, there are various jazz groups and musicians in Yuma that play throughout the year.

From fall to early spring runs the Jazz Nights at Julieanna’s Patio Cafe which offers live jazz every Friday evening along with a New Year’s Eve celebration.

Starting in mid-January, Yuma also sees the Village Jazz Series on Thursday evenings in the Village area of the Yuma Palms Regional Center. This series is seeing its eleventh year next season, and every year it presents a number of nationally recognized guests and local performers, Hennig said.

During Yuma’s hotter months, jazz music can be found at Lutes Casino for the summer series.

Hennig notes that the ongoing scene “requires more than just the musicians” and also attributes the growth of jazz in Yuma to partnerships with venues, media and other performers.

“So, what I like to call the Yuma jazz scene, is really a community wide group effort,” Hennig said. “And, because of this group effort, I feel extremely lucky not only to be able to perform this music on a regular basis, but to have the opportunity to help facilitate other groups performing, guests coming from out of town, and to provide local students with opportunities to hear live jazz, perform, attend clinics, and obtain Village Jazz Series scholarships. I just think it’s great that the Yuma community has individuals and organizations which make all this possible.”

“In the end, it also comes down to the music,” Hennig added. “Jazz by its very nature allows the musician to express him or herself, not re-create a tune off a recording, but to create fresh, on the spot, each time. This fundamental characteristic of the music, and those who perform it, is the crucial element which allows for this kind of long-term success and interest.”

Pancrazi, who has been playing at Julieanna’s intermittently since the 1990s, says the jazz scene has grown overall in Yuma

“When I started there, except maybe for some teachers, there was not anybody that I knew of actively performing Jazz down there,” Pancrazi said. “It was coming from out of town but it was not homegrown. I think now you see the beginnings of a homegrown scene and musicians that actually live there. Steve is absolutely instrumental in that.”

Pancrazi notes Julieanna’s is “just as valuable and just as vibrant” as any other venue he has performed in while playing in the Phoenix area.

“I am just thankful that Steve has taken it upon himself to kind of be the spokesman for the jazz scene down there and really been proactive to create venues and build it from the ground up,” Pancrazi said. “Everyone who performs down there owes him a debt of gratitude.”

Performance dates and information can be found online at www.yumajazz.com. Yuma Jazz can also be contacted by calling (928) 345-1534.

Yuma Jazz Company Quintet has been performing together about 14 years now, and has garnered critical acclaim in regional and national publications. The group performs straight-ahead, Latin, and progressive jazz, along with tunes from their 4 original music CDs. From heartfelt ballads to up-tempo excitement, the Quintet always adds a sophisticated groove to Julieanna’s patio.

Pete Pancrazi has been named by Downbeat Magazine as “one to watch” and a guitar player “deserving greater attention”. A Yuma native, Pete performs and teaches in the Phoenix area. Audiences enjoy his nimble, creative guitar work and warm vocals in settings ranging from solo performances at venues in the Phoenix/Scottsdale area to full ensembles at the Desert Botanical Gardens Jazz Series.

Jason & Elle is one of the most requested acts each year at the popular Village Jazz Series. Combining soul, r & b, Latin, and jazz into one warm, inviting “sound cocktail”, this talented local duo impresses with their instrumental and vocal finesse as well as there expansive personal charm. Jason Arviso - guitar & vocals, Eloisa Arviso - vocals & tenor sax