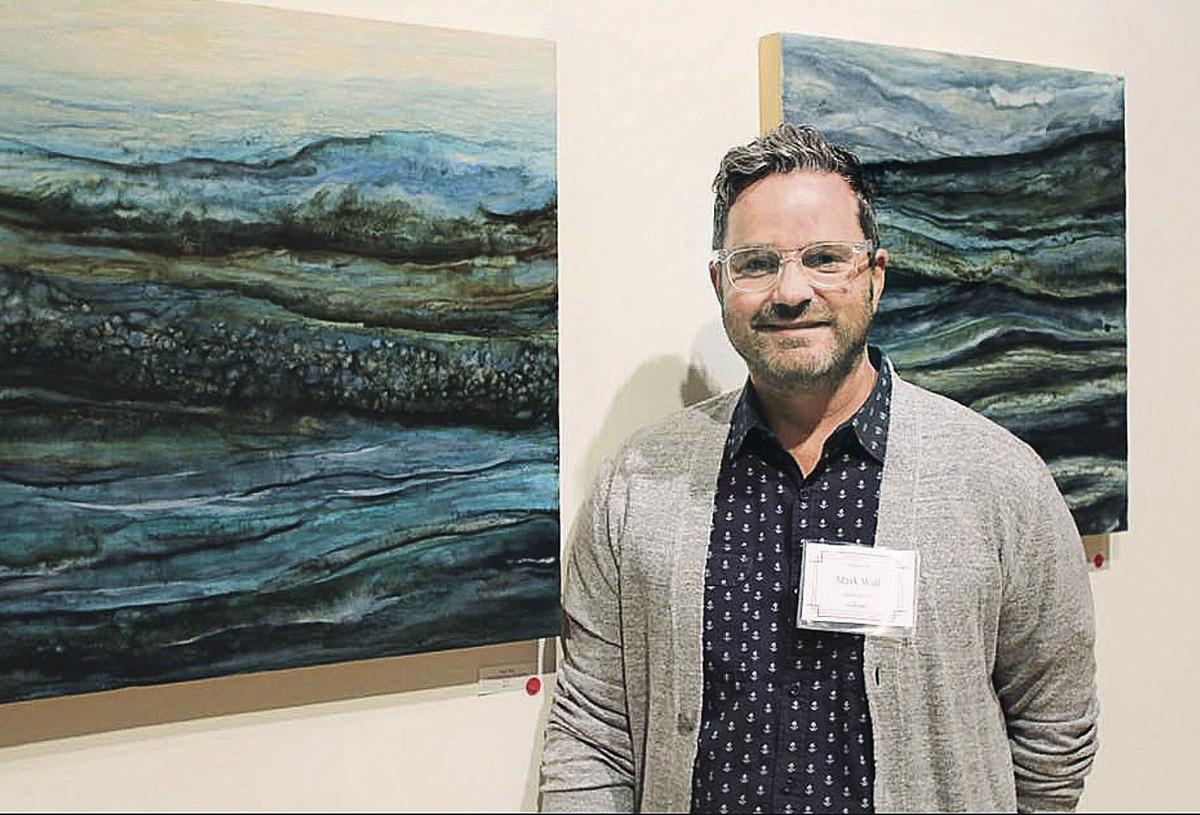 Artist Mark Wall poses by some of his paintings now on display at the Yuma Art Center. Wall is an encaustic painter, creating his paintings from molten wax. 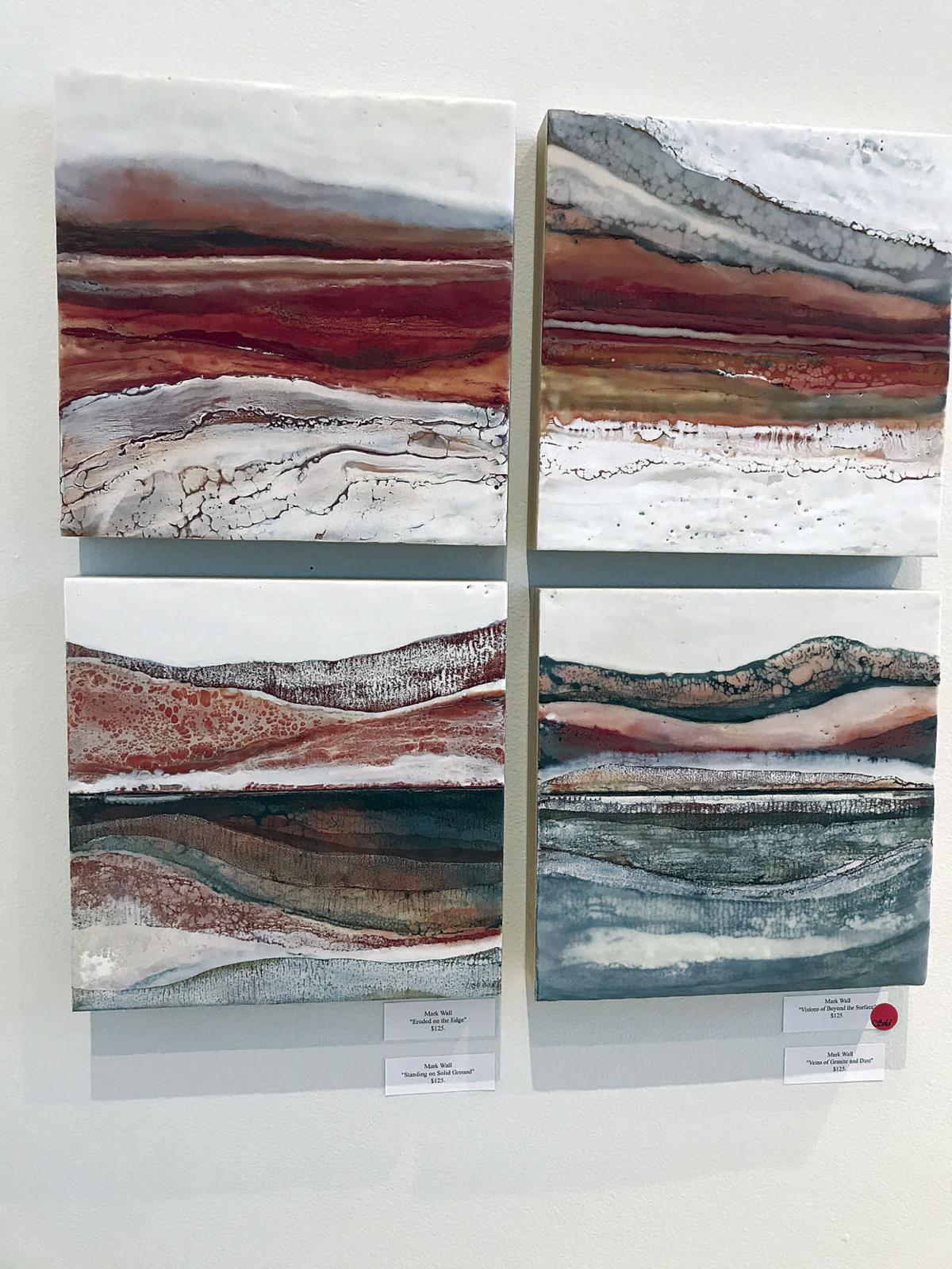 Several of artist Mark Wall's paintings reflect his winter home and love of the desert. The paintings are on display at the Yuma Art Center through Feb. 15. 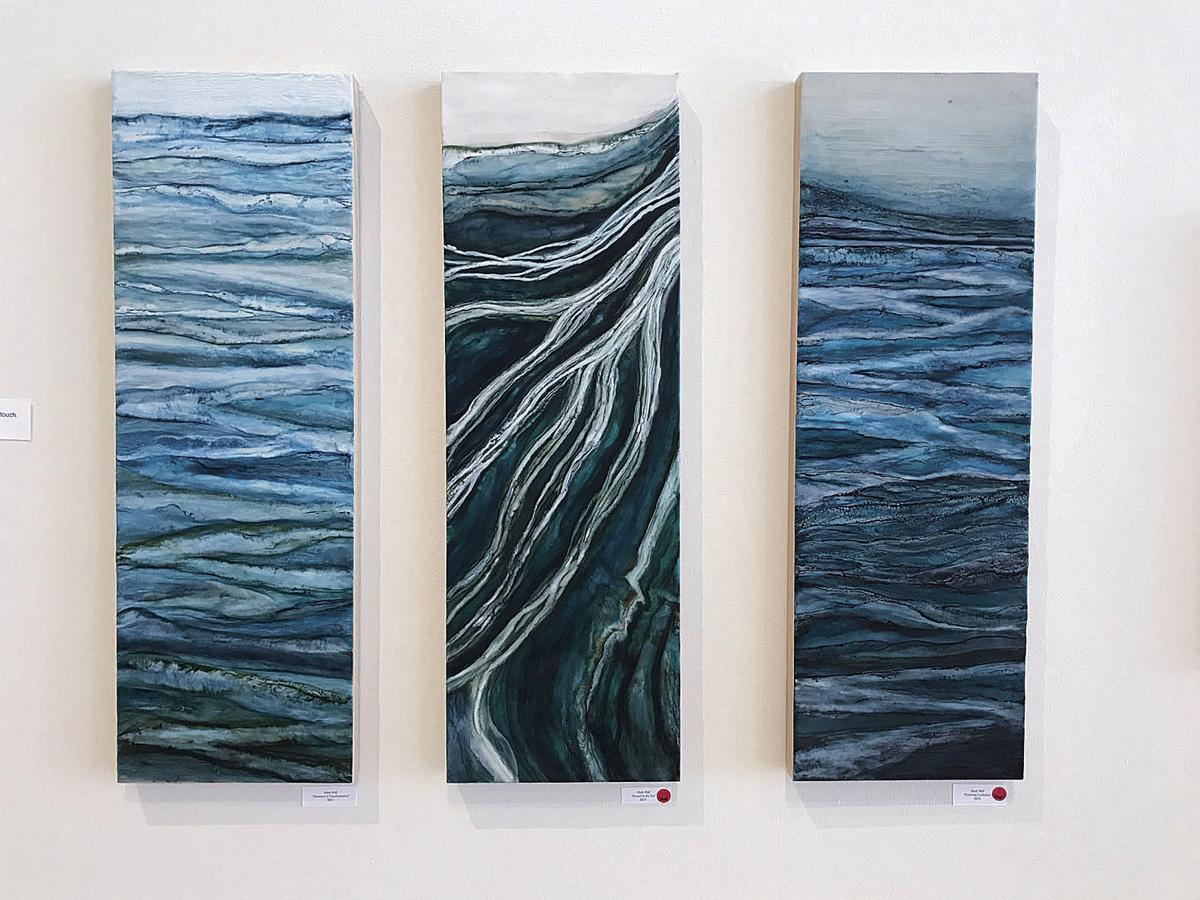 This panel of water-inspired paintings by artist Mark Wall can be seen at the Yuma Art Center through Feb. 15. Wall is an encaustic painter using molten, pigmented wax to create his art.

Artist Mark Wall poses by some of his paintings now on display at the Yuma Art Center. Wall is an encaustic painter, creating his paintings from molten wax.

Several of artist Mark Wall's paintings reflect his winter home and love of the desert. The paintings are on display at the Yuma Art Center through Feb. 15.

This panel of water-inspired paintings by artist Mark Wall can be seen at the Yuma Art Center through Feb. 15. Wall is an encaustic painter using molten, pigmented wax to create his art.

Beeswax and tree sap may sound like unlikely artistic mediums but at the hands of artist Mark Wall they become luminous, dimensional, beautiful works of art.

Wall is an encaustic painter. His medium is melted, pigmented beeswax and sap, his canvasses are wood, his palette a pancake griddle, his main tool a blowtorch.

The term encaustic is derived from Greek, meaning “to burn in.” The art form has a long history, dating back to 4th century BC with Greek shipbuilders combining heated beeswax and tree sap (damar resin) to waterproof their ships’ hulls. Over time, they started adding pigments to the mixture to decorate the ships. That technique evolved into more artistic applications on wood, ceramics, architecture and paintings on panels.

It’s a medium that appealed to the artist in Wall, representing a challenge and an opportunity to express himself artistically.

Through Feb. 15, Wall’s paintings can be seen in an exhibition at Yuma Art Center, 254 S. Main St. The Art Center is open from 10 a.m. to 8 p.m. Tuesday through Saturday; admission is free.

His show is titled Grounded, a title that to Wall represents “the many things that ground me as an individual and human.” And, while abstract, they reflect his two homes: The desert and farmlands surrounding Yuma and the water surrounding the remote Island of Decatur in the Salish Sea of Washington State.

“Some (of the paintings) are water inspired,” he said. “But the desert fascinates me, too. There’s something so inspiring about the desert … such a level of complexity with the flora, fauna and geology. As humans, I think we feel we are grounded by nature. All my work is nature-based abstracts. They are land and water-based but there’s a lot of room for individual interpretation. I want people to have the space to engage with my work and enter their story.”

Wall attended Parson’s School of Design in New York City and Cornish College of the Arts in Seattle. His education led to a career of corporate visual design as a creative manager for retailers, among them Starbucks. After 20 years in the corporate world, he now focuses on his own creative work.

He has a home on a small, remote island among the San Juan Islands where he lives off the grid. Three years ago, he and his partner were traveling in a recreational vehicle and decided they wanted a land base in the desert and pulled into Yuma. Two days later they bought a little casita in the Foothills.

“I’m so fortunate and grateful,” he said of his new winter home. “The community has welcomed me with open arms.”

Wall’s work reflects his experiences and perspectives of time and place: Growing up in the Pacific Northwest, traveling on a sailboat in the Salish Sea along the Pacific coastlines, and now setting new roots in the desert of Yuma, grounded by the Gila Mountains, Colorado River and farmlands.

He said he was drawn to encaustic paintings and decided it was a medium he wanted to explore. He described the process: He heats the wax mixture on the griddle to the molten state, adds the pigments and applies the wax in layers that can range from five to 75 or more onto a cradled wood panel. The damar resin is added to the wax as a hardening agent and elevates the melting point of the beeswax to allow a more fluid medium. Wall then uses a heat gun or blowtorch to fuse the layers of wax and colors.

He’s usually working on several paintings at a time as each one needs to cool between applications of the wax.

“I also like to put it aside and look at it and consider the next application,” he said. “The painting talks to me and I react to that. I can also carve into it and add lines and create designs.”

In addition to his full-size paintings on display, Wall also has 4-by-4-inch paintings that can be purchased from the gallery wall. “It’s important to me when people come to the show … if my work touches them and they would like to own one of their own, for a small price, they can purchase something.”

For more information about Wall and his art, visit his website at www.markwallcreative.com.

Some sun in the morning with increasing clouds during the afternoon. High 82F. Winds ENE at 10 to 15 mph.