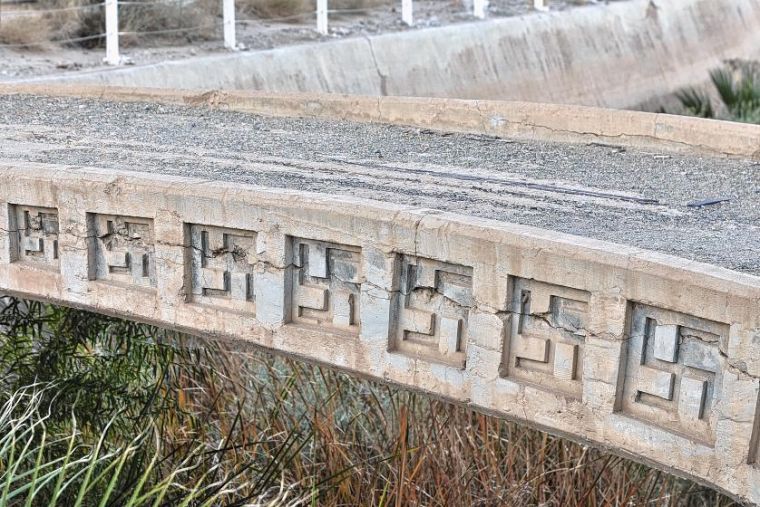 The Laguna Bridge near Mittry Lake may not be well known to all Yumans, but the site is famous on the Internet, thanks to its unique decorations. Photographs of the bridge are even exhibited at a swastika museum in Canada. 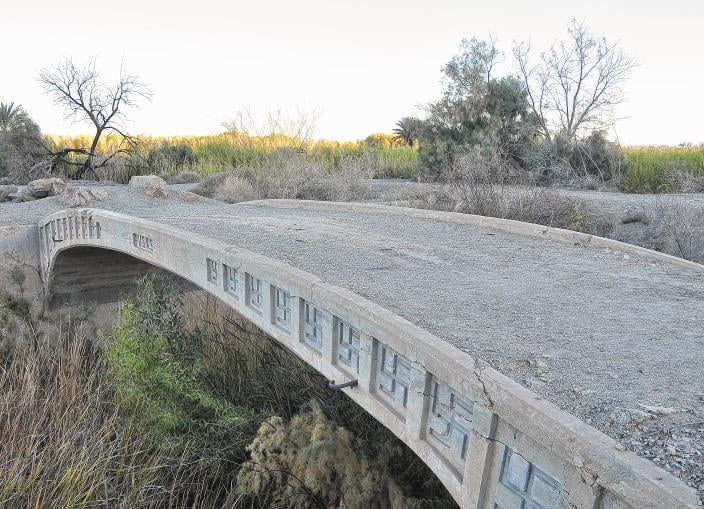 The Laguna Bridge sits a few yards east of the original Laguna Dam, which was the very first dam to be built on the Colorado River, making the water accessible for farmers on both sides of the river.

The Laguna Bridge near Mittry Lake may not be well known to all Yumans, but the site is famous on the Internet, thanks to its unique decorations. Photographs of the bridge are even exhibited at a swastika museum in Canada.

The Laguna Bridge sits a few yards east of the original Laguna Dam, which was the very first dam to be built on the Colorado River, making the water accessible for farmers on both sides of the river.

If it could speak, Yuma County's most misunderstood bridge would tell you the real reason that 40 swastikas adorn its century-old concrete facade.

But since the Laguna Bridge stands silent, the curious landmark relies on others to tell its story. Unfortunately, that story too often tends to land somewhere between people retelling a popular urban legend and the occasional person who knows the real history — which is actually much more intriguing.

It's a confusion of facts that has inspired people to call for the bridge's destruction over the years.

“The bridge was designed by the Nazis and shipped here from Germany.” So says the urban legend, a tale sometimes repeated in the numerous mentions of Laguna Bridge found all over the Internet.

Despite any seemingly obvious holes in the legend's logic, the tale is often believed — and passed along — even though the bridge weighs an incredible amount and Adolf Hitler was just a teenager when it was built.

The true story behind the bridge's design involves another country (not Germany) and invokes religious versus political iconography, but let's not ruin the mystery by unveiling the facts too soon.

First: A little information to put it all into context.

The Laguna Bridge stands to the left of the road as visitors to Mittry Lake enter from the south. Depending on the height of nearby weeds, however, people driving by may not even notice the bridge — or its rows of swastikas on either side.

But it certainly caught the eye of Dan Rasp years ago.

“I remember driving a Model A across it!” Rasp said, chuckling at the memory from his teens. “It was probably 1946 or 1947 that I first saw it. My first impression was getting a little angry with Hitler for having stolen another country's symbol.”

Sources about the Laguna Bridge's real story don't get much better than Rasp, a retired engineer and professional treasure hunter who has been hired to chase tales of everything from buried stagecoach treasure to sunken ships.

Rasp shakes his head when asked to explain why people would believe that a concrete bridge would be mailed to Yuma from Europe.

“I don't know what gets into our id that makes us do that! One of my hobbies through my life has been finding these stories and legends, then trying to look into them and find out if they have a basis in fact.”

The U.S. Reclamation Service built the Laguna Bridge in 1907, at a time when the government was looking for a way to tame wild flooding along the Colorado River. The bridge stands just a few yards away from its sister component: the Laguna Dam, the very first dam built on the Colorado.

But those engineers didn't just find great designs for sturdy bridges. They also encountered bridges decorated with a curiously appropriate symbol: the swastika.

“I think it's a good symbol. I saw it first as a Native American symbol on petroglyphs at Borrego Springs (Calif.). I, of course, realized thereafter that the swastika was already being used by the Nazis, but as a kid you're not up on world affairs.”

But the Reclamation Service didn't stop at using the swastika to decorate its new bridge and dam. Rasp said the agency briefly adopted the swastika as its official logo. The swastika was also adopted by the Arizona Highways Administration for a time.

“It appeared on Arizona highway signs, much as the bear on California highway signs,” Rasp said. “It became controversial in the 1940s and was eliminated. It's too bad when people forget that most symbols have had many meanings over the years and in different cultures.”

Local officials with the Reclamation Service declined to be interviewed about the Laguna Bridge, saying their engineers were mostly new to the area and not really familiar with the bridge's full history.

So it's Rasp to the rescue. He knows the story well, having led desert tours to the bridge and other areas of interest for about 20 years.

He's even visited the bridge when Jewish rabbis have been on the site, calling for the bridge to be destroyed.

“Every once in awhile, that idea rears its ugly head. It's happened several times over the years. Even among locals it's been an item of controversy,” he said, offering his theory on why the bridge still stands. “I think that in order to remove it, it would take an act of Congress.”

Straus is this region's director for the Anti-Defamation League, a national organization that “fights anti-Semitism and all forms of bigotry, defends democratic ideals and protects civil rights for all.”

Members of the Jewish community in Yuma declined to comment about the bridge, referring questions to the Anti-Defamation League's office in Phoenix.

Straus says people who are offended by Laguna Bridge simply need an open mind — and a few facts.

“There is absolutely nothing wrong with that bridge. I don't think it's a problem at all. You have to apply common sense and ask yourself if it was the intent of the builder of that bridge to promote Nazism. The answer is obviously ‘no.'”

Straus then takes his support one step further. He says the bridge shouldn't just be spared from harm. It should be cherished.

“I am an Arizona native and this is part of our history. The way I look at it, we don't have enough history here. I don't want to destroy what little we have.”

Today, historic significance is pretty much all the Laguna Bridge has to offer. Its dam outlived its usefulness years ago and has since been replaced by much larger and more impressive-looking facilities.

The bridge wears numerous deep cracks across its face and no longer bears the weight of cars across its narrow back. A barrier has been installed to make sure people don't try to drive across the aging structure. If they dare, however, a curious camper or fisherman can still walk across.

Laguna Bridge simply waits as its story is told from time to time — sometimes correctly and other times not so much.

Rasp says people really haven't gotten fired up about the bridge in recent years, but is it because they understand the real story or simply because the weeds have done a good job keeping it hidden?