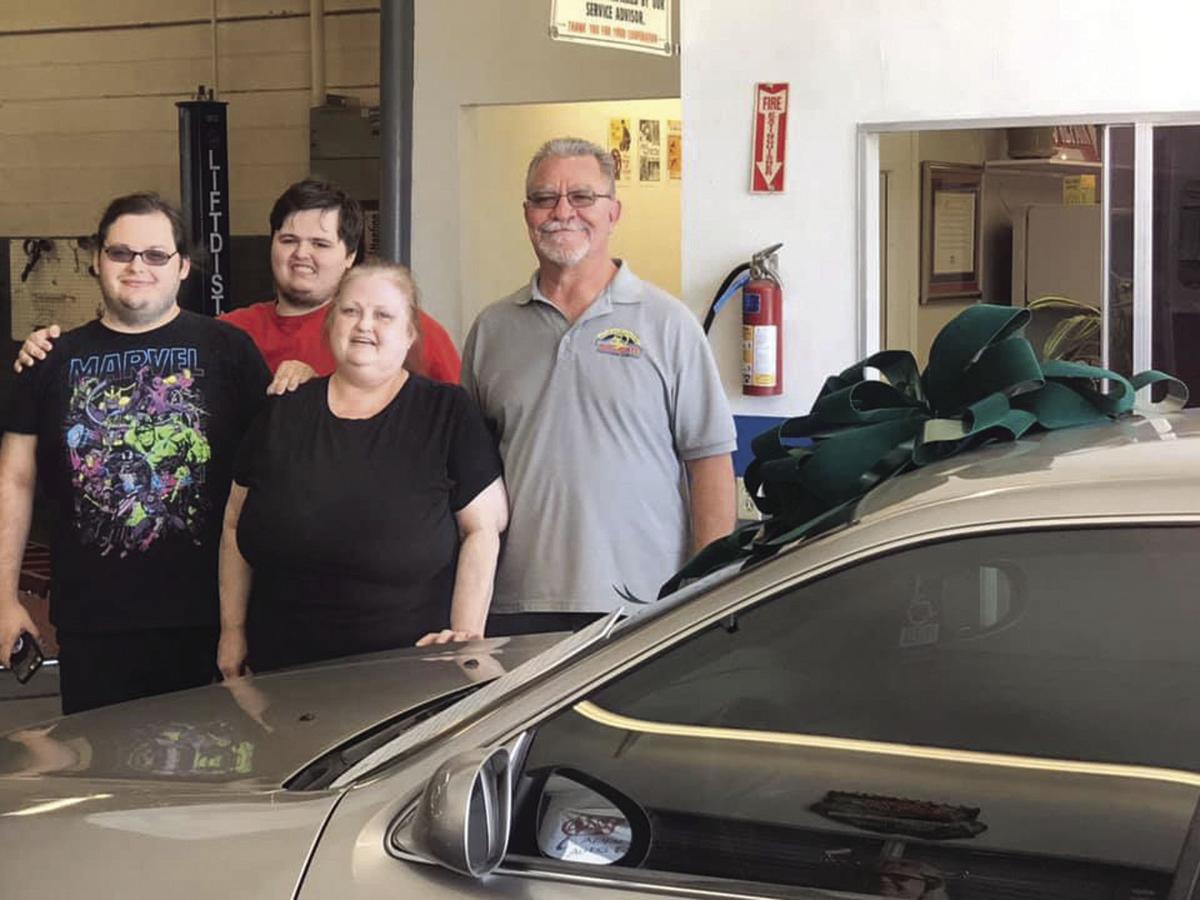 Dawn Flynn (third from left) and her two sons, William and Harrison, stand in front of the car they won from Accurate Automotive Attention. For eight years, they were practically housebound without a car. Russell McCloud (right), owner of the company, poses with the family. 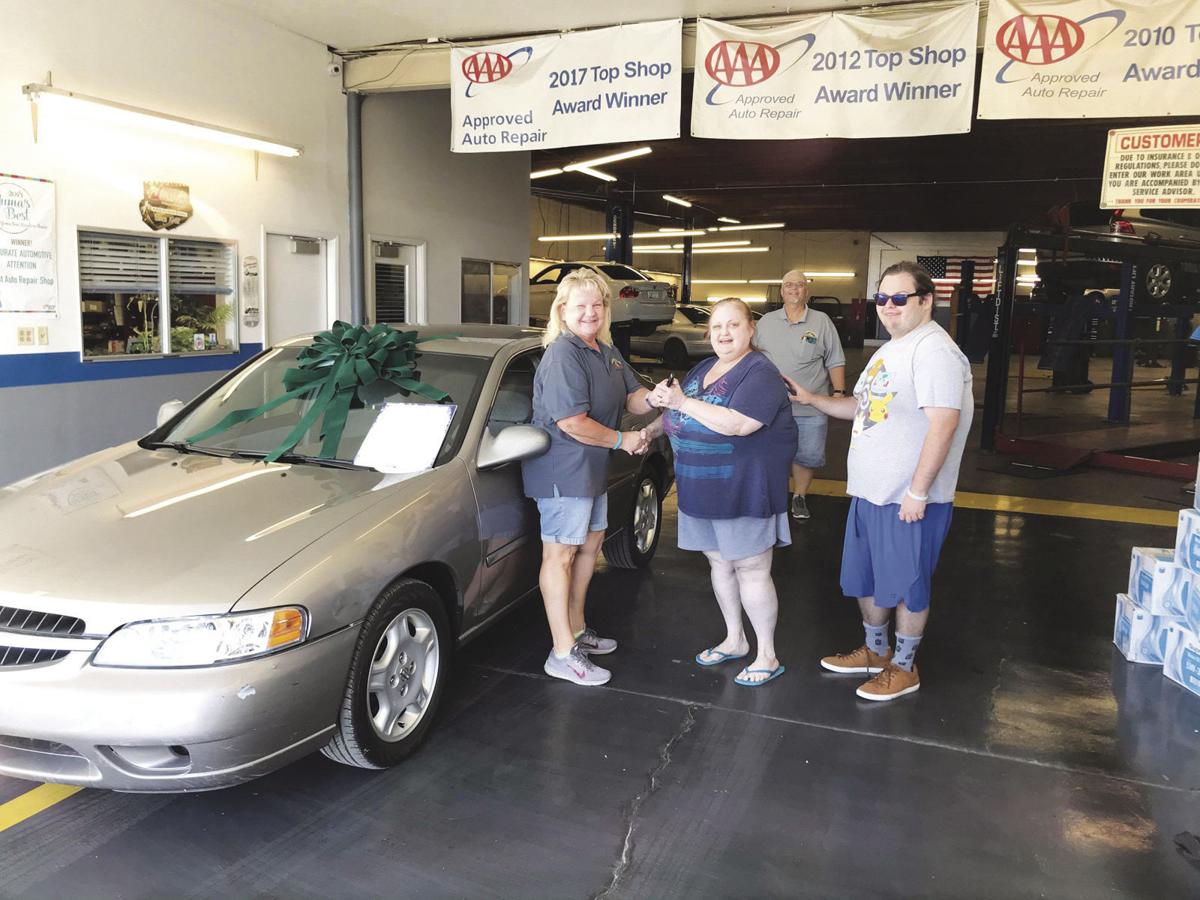 Michele Payne of Accurate Automotive Attention hands Dawn Flynn and her son, William, the keys to a Nissan Altima.

Dawn Flynn (third from left) and her two sons, William and Harrison, stand in front of the car they won from Accurate Automotive Attention. For eight years, they were practically housebound without a car. Russell McCloud (right), owner of the company, poses with the family.

Michele Payne of Accurate Automotive Attention hands Dawn Flynn and her son, William, the keys to a Nissan Altima.

Dawn Flynn has a lot to be thankful for, but most importantly she has a renewed sense of hope. After struggling for years without a vehicle, the 54-year-old Yuma resident recently won a car from Accurate Automotive Attention.

“I don’t want to seem corny, but it seems like a second chance at life,” Flynn said.

For eight years, the widow and her two sons have been practically housebound. Both she and one of her sons are on disability. She suffers from lupus and her son, Harrison, 21, has autism, seizures and intellectual disabilities, while her older son, William, 23, attends Arizona Western College and works part-time.

After her husband died, in 2011, Flynn and her two sons moved from Phoenix to Yuma to be closer to her sister. It was a tough year; she lost not only her husband, but also her mother and grandmother all within eight months.

Flynn became “deathly ill” in 2013 and almost died a couple of times. The pain from the lupus and chemotherapy have made her feel like she’s at the end of her rope. The only thing that kept her going were her kids.

“Last year was really, really depressing,” she recalled. “Not having a car is depressing. We were stuck in the house and couldn’t go anywhere, do anything fun. The only thing they could do is sit at home and eat. We live next to a Fry’s. We’ve all gained weight.”

It was simply too expensive to go out. They were spending about $150 on rideshare fees every month. They took Uber rides to Bible study and doctor and other appointments, which can add up. Just a haircut ended up costing her $60 after adding up the $20 rideshare fees each way to the $20 haircut. Everything automatically became more expensive, even free events.

Flynn had never heard of Accurate Automotive Attention before winning the car. Now she’ll never forget the company and she’ll be eternally grateful.

Russell McCloud, owner of Accurate Automotive Attention, said the company was looking for a way to celebrate the 50th anniversary of the company that his father started in 1969.

“The idea came up of giving away a car to someone in need as a way of giving back to the community who supported us for all those years,” McCloud explained. “We had this Nissan Altima that we thought might be a good and economical car for someone in need. We had the crew go through it and make all repairs necessary and bring the maintenance up to par. It drove well and had a nice interior so we knew we had a good car to give away.”

The company sought nominations of people who don’t have a vehicle who would benefit from having a gently used, low-mileage car, along with free maintenance for a year. The company wanted to give it to someone who needed reliable transportation with the hope that it would be life-changing, perhaps the catalyst for higher education and/or career advancement.

The company then asked clients to vote for the eight finalists from about 40 nominations as chosen by an outside panel. Kay Wright, Harrison’s former teacher, and a neighbor whom she knows only by her first name, Barbara, nominated Flynn.

“Dawn’s story was the most compelling, and she won the secret ballot by a good margin,” McCloud said.

The phone call to let Flynn know she won moved a room full of people to tears as they listened to her reaction. “Oh my God! Oh my God! Thank you so much,” she said, sobbing.

“Dawn has been so grateful and so kind to us that we know the people chose well,” McCloud said. “We got a very nice visit from her and her sons a week later, and she gave us numerous examples of how her life has changed after being basically housebound for eight years. We are extremely pleased that Dawn received the car and the positive impact it has had on their lives.”

For her, it might as well be a brand new car. “We’re so thankful. Words can’t explain what this has done for us,” she told the Yuma Sun.

Now, Flynn said, they’re more active and going out all the time. Her older son, at 23, doesn’t have a driver’s license. He never bothered to learn to drive. Without a car, there was no point. Now he’s learning to drive.

“It’s just what we needed. We’re so hopeful now. I feel we have a chance now,” Flynn said.