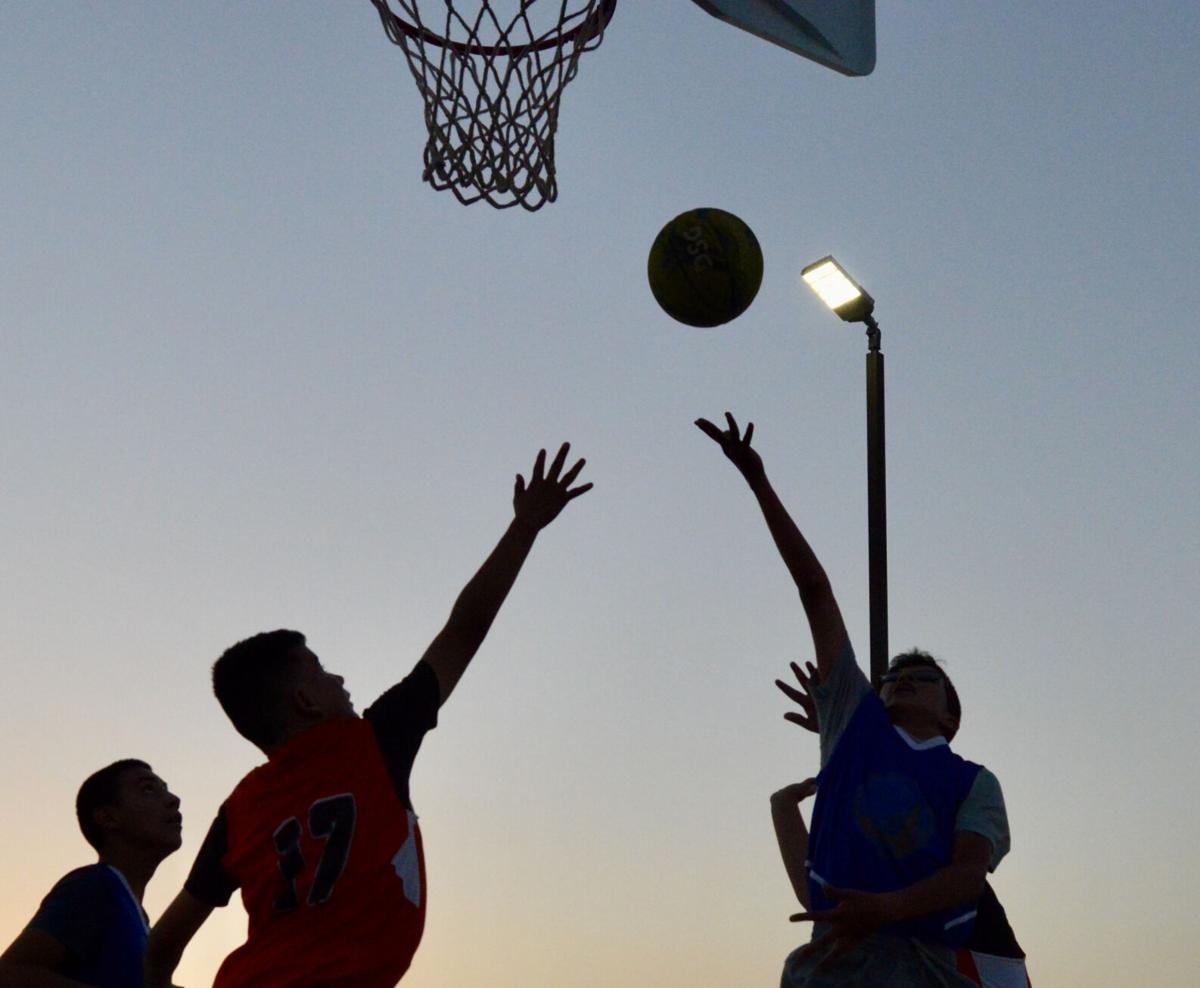 Youths fight for the ball during a game in the Avenue F Youth Basketball League. 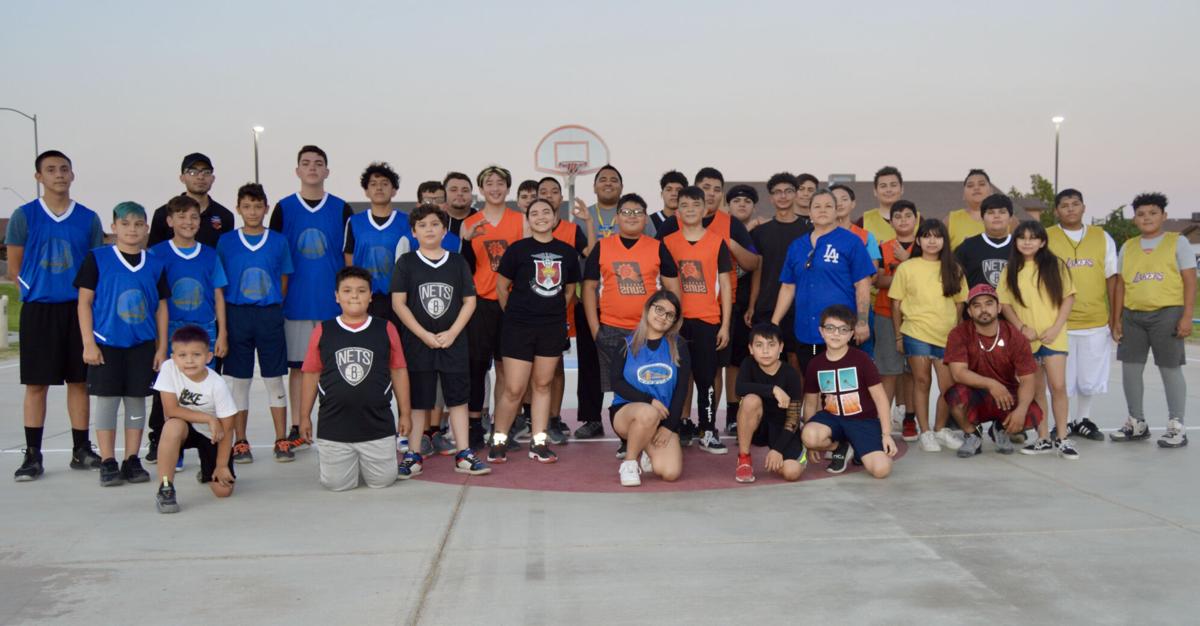 Seen here are players from three teams in the Avenue F Youth Basketball League, along with parent volunteers. 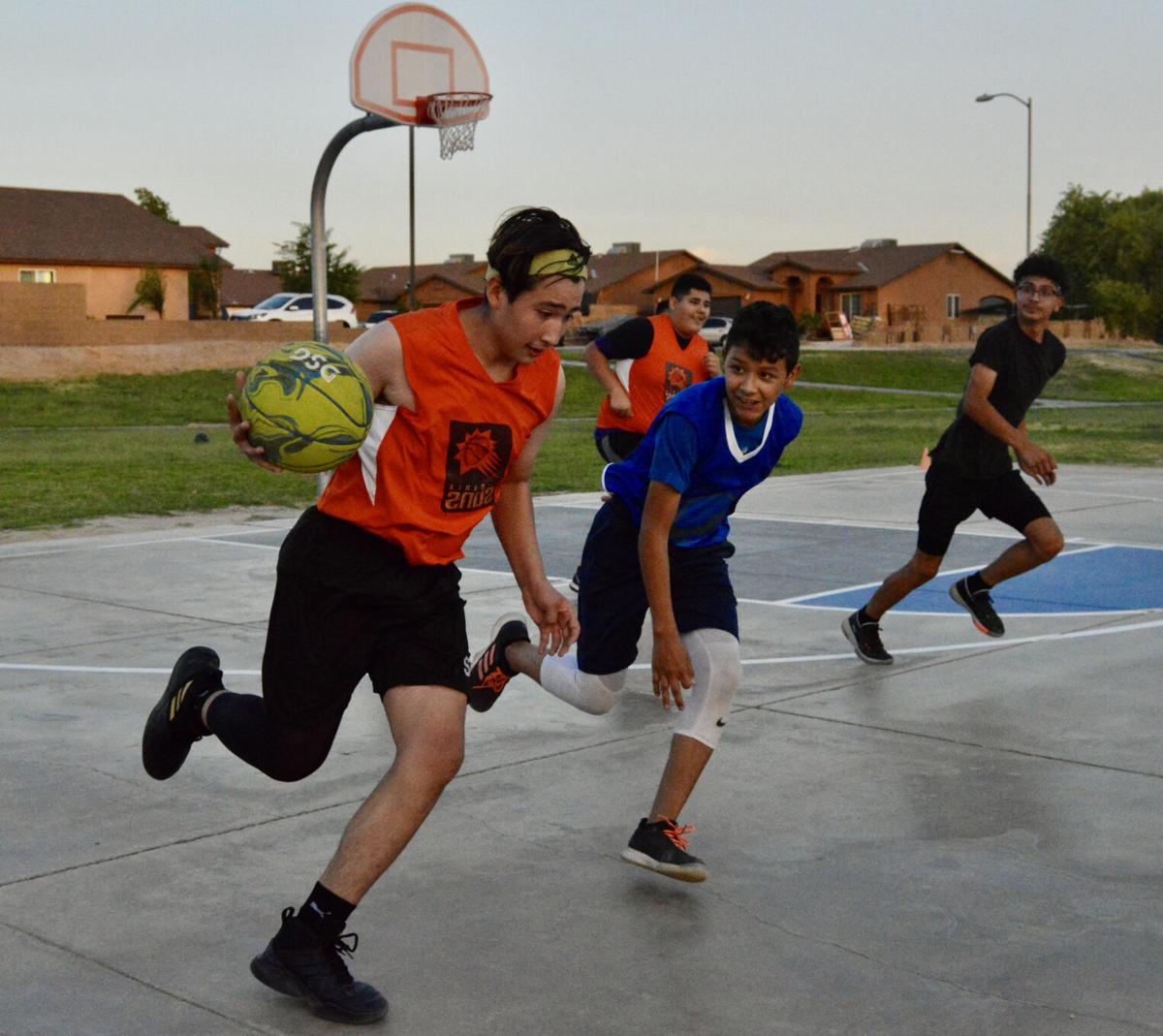 A player drives to the basket in a game in the recently created Avenue F Youth Basketball League in San Luis.

Youths fight for the ball during a game in the Avenue F Youth Basketball League.

Seen here are players from three teams in the Avenue F Youth Basketball League, along with parent volunteers.

A player drives to the basket in a game in the recently created Avenue F Youth Basketball League in San Luis.

SAN LUIS, Ariz. – What might only have been a few pick up games of hoops among kids in the neighborhood on this city’s east side has turned out be a formal youth league, thanks to the initiative of parents who wanted to give their children and teens a healthy outlet during the pandemic.

The Avenue F Youth Basketball League, formed in September, brings together 87 youths between the ages of 8 and 15 who make up six teams.

The league takes its name from the street that feeds into subdivisions on the east side where the players live. The afternoons find them playing or practicing on the courts at the city’s Alegria Park nearby.

“This began in the pandemic year,” said Samuel Maldonado, a founder of the league. “A lot of people told us we couldn’t do it, but we had already been talking for a year about getting the league started. We didn’t have a lot of support, but we had faith in God to continue moving forward.”

Organizers started out going door to door in neighborhoods surround Alegria Park, inviting parents to sign up their kids for the league. Five children showed up for the first practice, but the group continued to grow in numbers until it had enough children to form the inaugural four teams.

“We try to make a change in the lives of these children, and to tell them that anything is possible, even against adversity.”

The AFYBL is the first sports program to serve youths on the city’s rapidly growing east side, but recently it has attracted the interest of outside teams, including one from Yuma that has taken part in the league’s tournaments.

“Before, children never went out (to play). There was no (athletic) program in this section,” said Abizail Moreno, an eastside resident and father of two players in the league. “Now they come and have fun. They don’t go around doing bad things, they make friends, they develop and they take part in activities they hadn’t experienced before.”

Mayra Ponce, who brings a son and a nephew from Yuma to play in the league, agreed that it has provided a healthy outlet for youths.

“For us it’s a way to support our son,” she said. “We see him excited and more committed to his schooling, because he has to have good grades to be here (playing in the league).”

The league is organized similarly to the NBA, with trophies and are handled out to winners of the tournaments, said Maldonado, who played basketball at the high school and college level in California.

Over time the league has attracted donors and sponsors to help cover its expenses, but Maldonado said the league owes its existence in large part to the support of Maria Alegria, a San Luis resident who previously played a role in creating Alegria Park, as well as to the support of San Luis Mayor Gerardo Sanchez.

Getting the league started during the pandemic proved to be a challennge, Maldonado said.

“It was a huge struggle. A lot of people told me we shouldn’t do it, but the parents wanted to see their kids get out and be active. But we didn’t do it without taking precautions. We have a license, insurance, we used masks when it was obligatory, (we use) disinfecting gel.

“The reward is the personal satisfaction, because we don’t get paid to do this. Now the kids have a motivation, a mission, a goal, and the parents help with the league.”

The league welcomes the participation of teams from elsewhere in San Luis and from outside the city, said Maldonado. In fact, for the upcoming season, it anticipates having 12 teams, three of them from Yuma.

“We hope that this can grow and that more kids can find out about it,” Maldonado said. “In San Luis we haven’t had success in basketball, and what we are doing preparing them so that when they get to high school or college, they will have had that experience.”

He also foresees the league expanding to include other sports, including soccer and football.