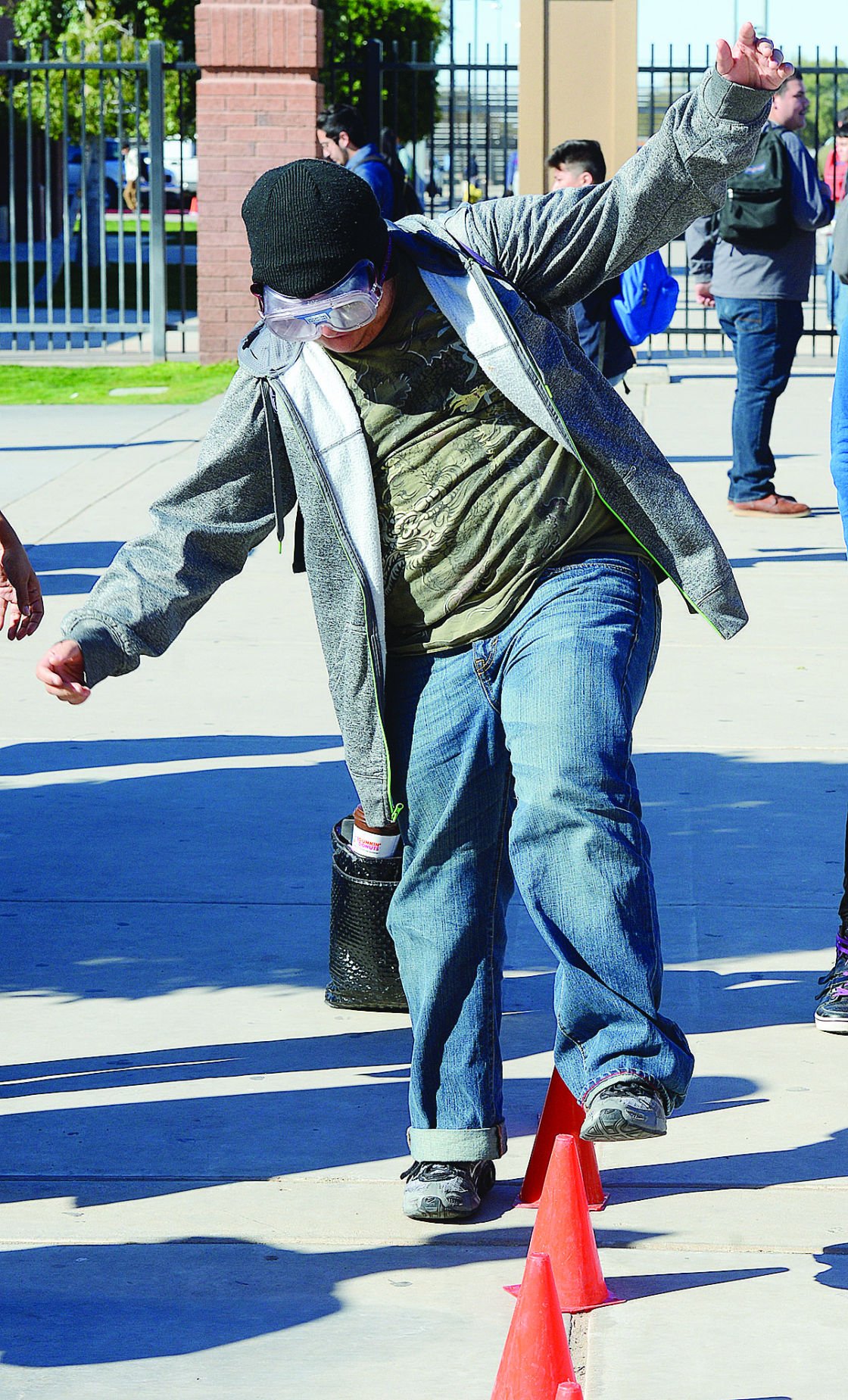 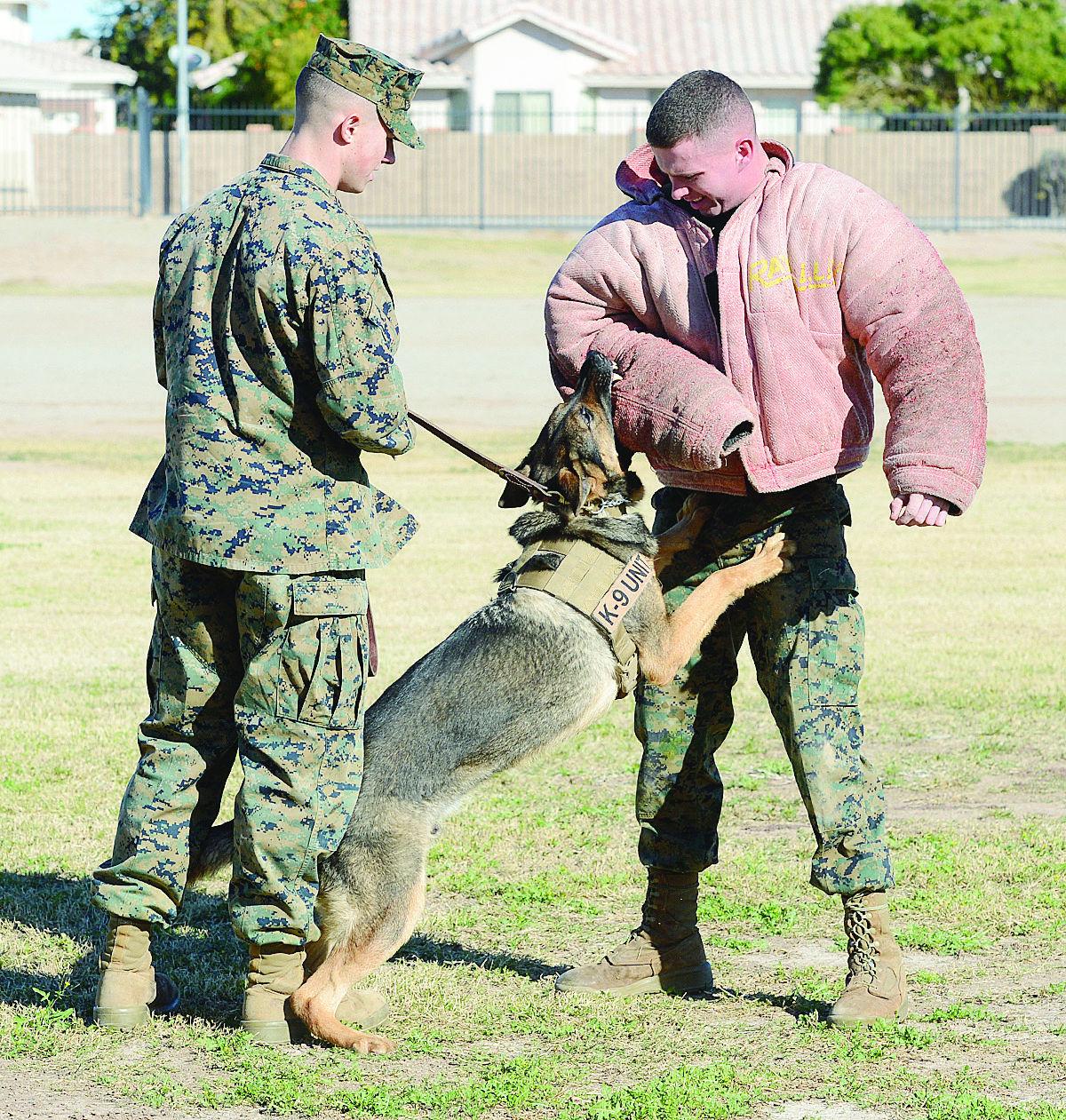 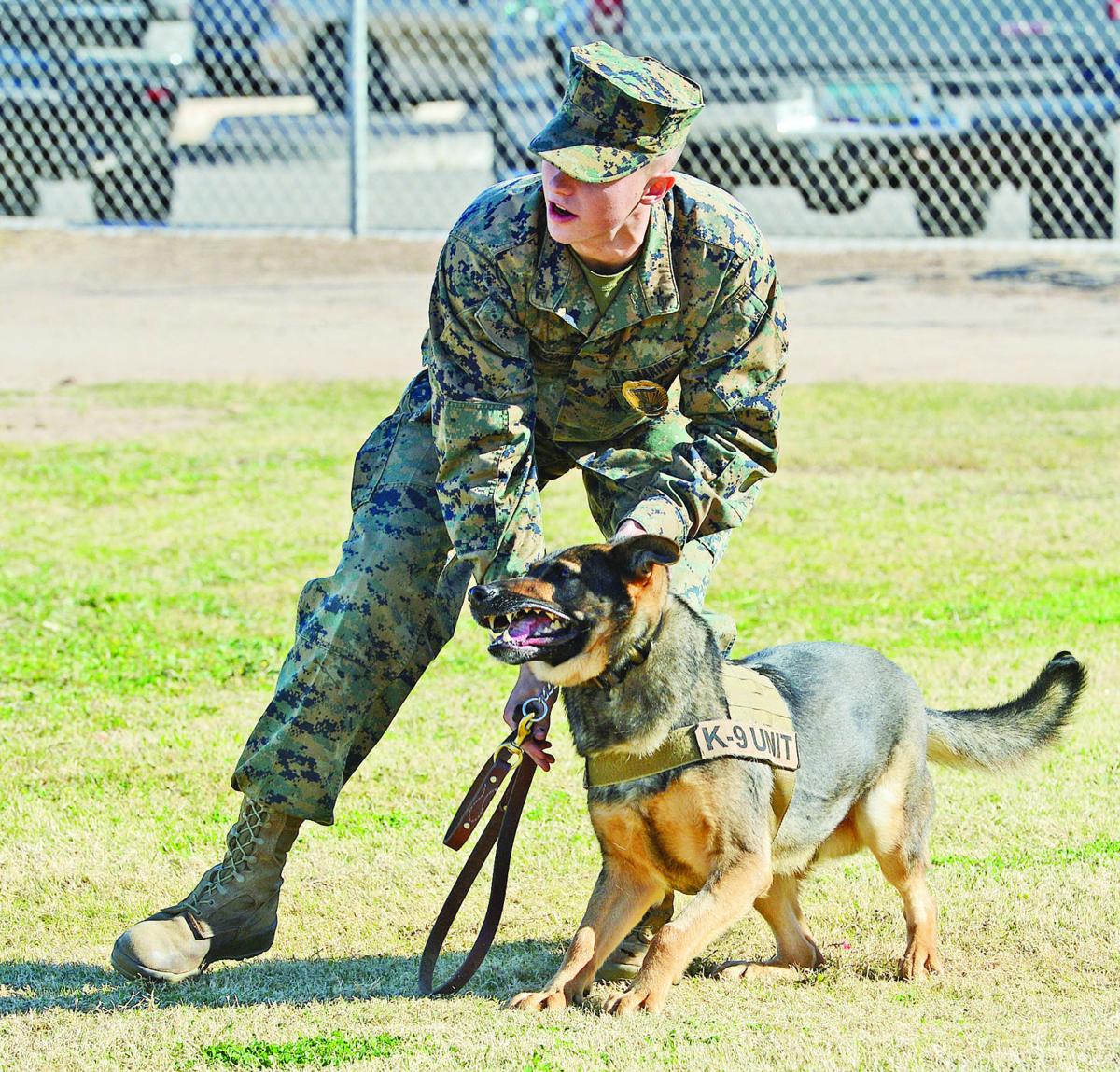 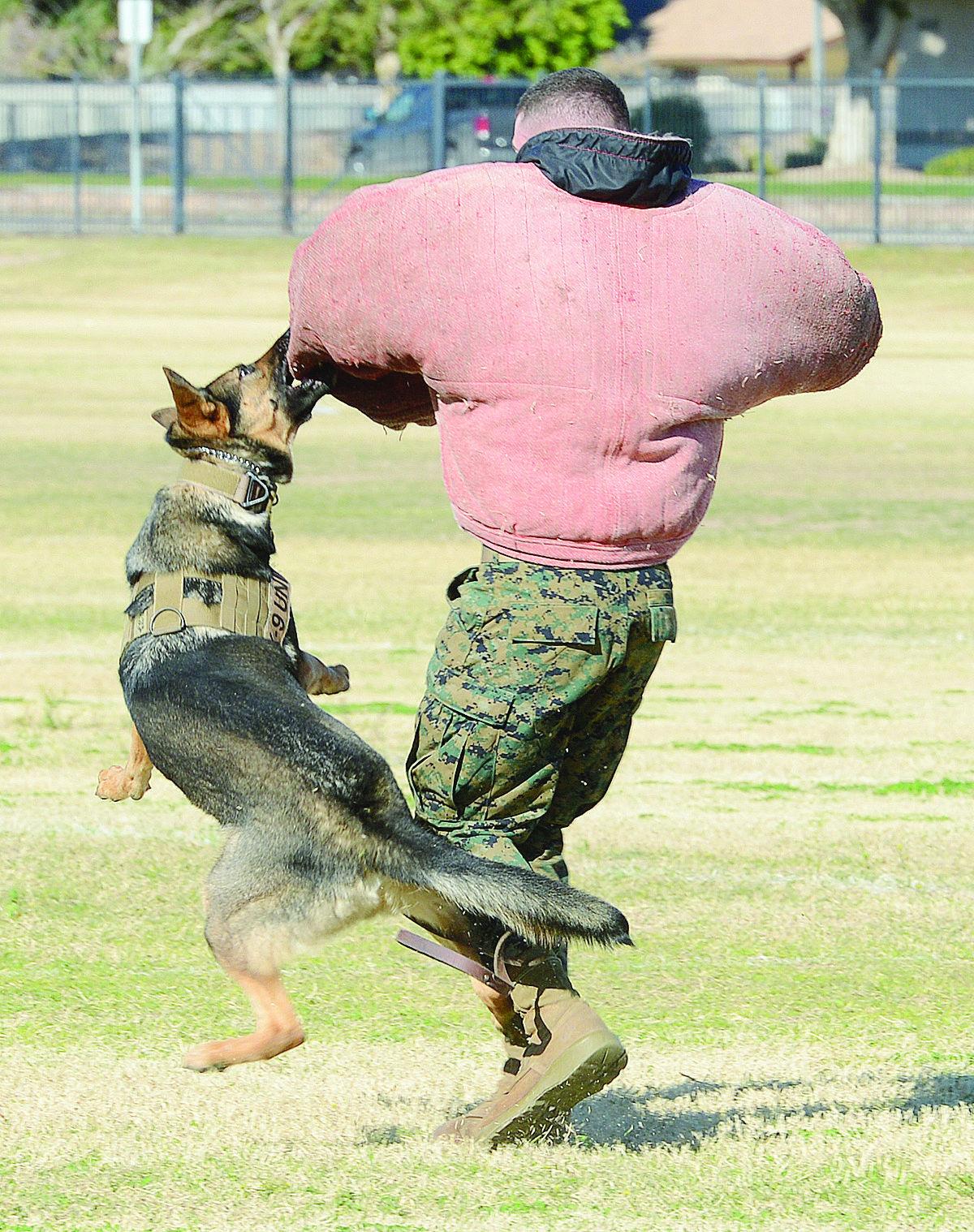 Cato, a U.S. Marine Corps K9, chases down and sinks his teeth into the arm of Lance Cpl. Dan Schuck during a demonstration for Cibola High School students Tuesday morning on the campus. The demonstration was part of the Marine Corps Air Station Yuma's Drug Demand Reduction Program.

Cato, a U.S. Marine Corps K9, chases down and sinks his teeth into the arm of Lance Cpl. Dan Schuck during a demonstration for Cibola High School students Tuesday morning on the campus. The demonstration was part of the Marine Corps Air Station Yuma's Drug Demand Reduction Program.

Although he wasn’t much older than many of the students he spoke to on Tuesday at Cibola High School, Lance Cpl. Angel Reyes said he felt it was important to help educate them about the dangers of drugs and alcohol.

“I heard about the event and wanted to help out,” said Reyes, who joined the Marine Corps after graduating high school. “These teens are only a year or two younger than me, so to be able to give them information I could have used back then, it is something I would gladly do, so they can make smart decisions.”

Reyes was one of several Marines and other representatives from the Drug Demand Reduction Program at Marine Corps Air Station Yuma who were visiting Yuma-area high schools this week to educate students regarding the many myths about drug and alcohol use, which confront them on a daily basis.

The program is being held in conjunction with National Drug Facts Week, which spans from Jan. 25 to Jan. 31. This is the third year that DDRP has been invited to give its presentation to high school students in Yuma, which is intended to debunk students’ misconceptions about illicit drugs and prescription medications.

National Drug Facts Week was launched in 2010 to counteract the myths that teens often hear from the Internet, TV, movies, music or friends. One popular myth is that marijuana is harmless, although science says that marijuana use by teens may negatively affect brain development and impair school and athletic performance.

Program Coordinator Virgil Tapispisan said the goal is to reach out to high school students and inform them about the harmful effects of drugs, alcohol and prescription medication — and why they shouldn’t use them.

Tapispisan said, according to statistics from the governor’s office, drug use in Yuma County last year, particularly in methamphetamine and marijuana, was higher than the state average.

“I have personally seen that dangers of drug abuse,” said Tapispisan, who used to be a probation officer. “I’ve seen how drugs not only ruin lives, but entire families.”

As part of the program, a booth was set up outside the library at Cibola where students, as they stopped by, received a myriad of informational brochures about various drugs, both illicit and prescription, and their side effects. There was also a banner the students could sign pledging to be “drug free.”

Students were also given the opportunity to a pair of “drug goggles” and walk through a series of cones, which showed how much drugs can actually impair a person’s vision.

The biggest attraction, however was a presentation by a U.S. Marine Corps K9 named Cato and his handler, Lance Cpl. Chas McConnell, who put on several demonstrations throughout the morning.

Only in its third year, Tapispisan said the students seem genuinely interested in the program and it has garnered a lot of positive response from school administrators.

At MCAS Yuma, the program serves as an education, outreach, and awareness program to deter military personnel from abusing illegal drugs and prescription medications.