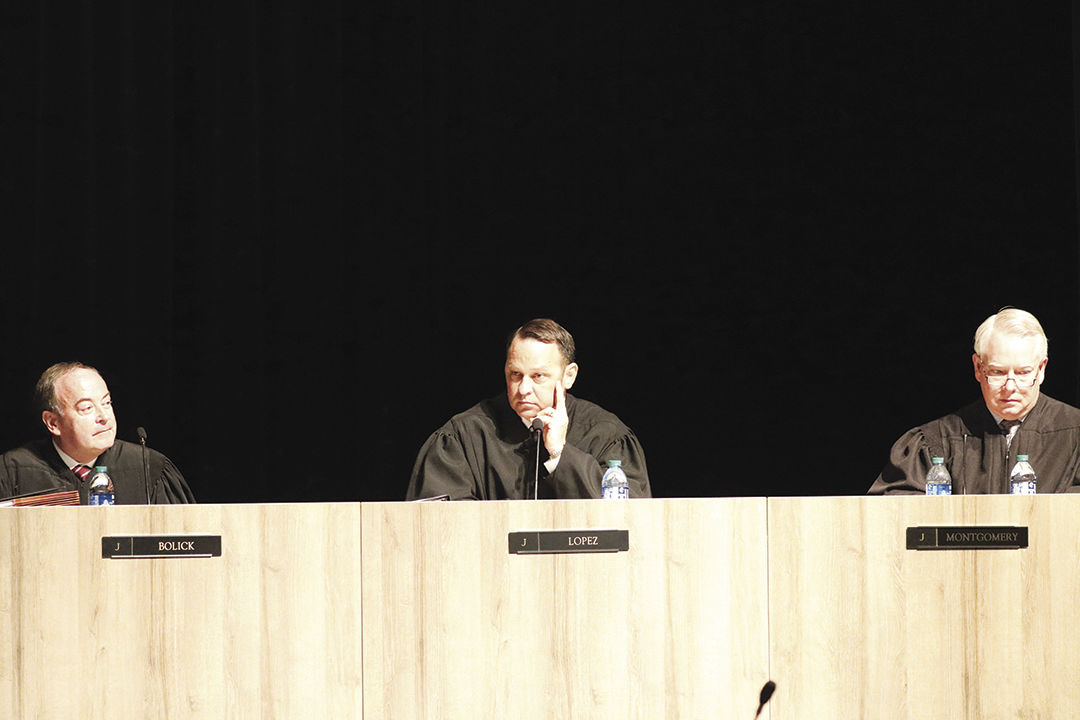 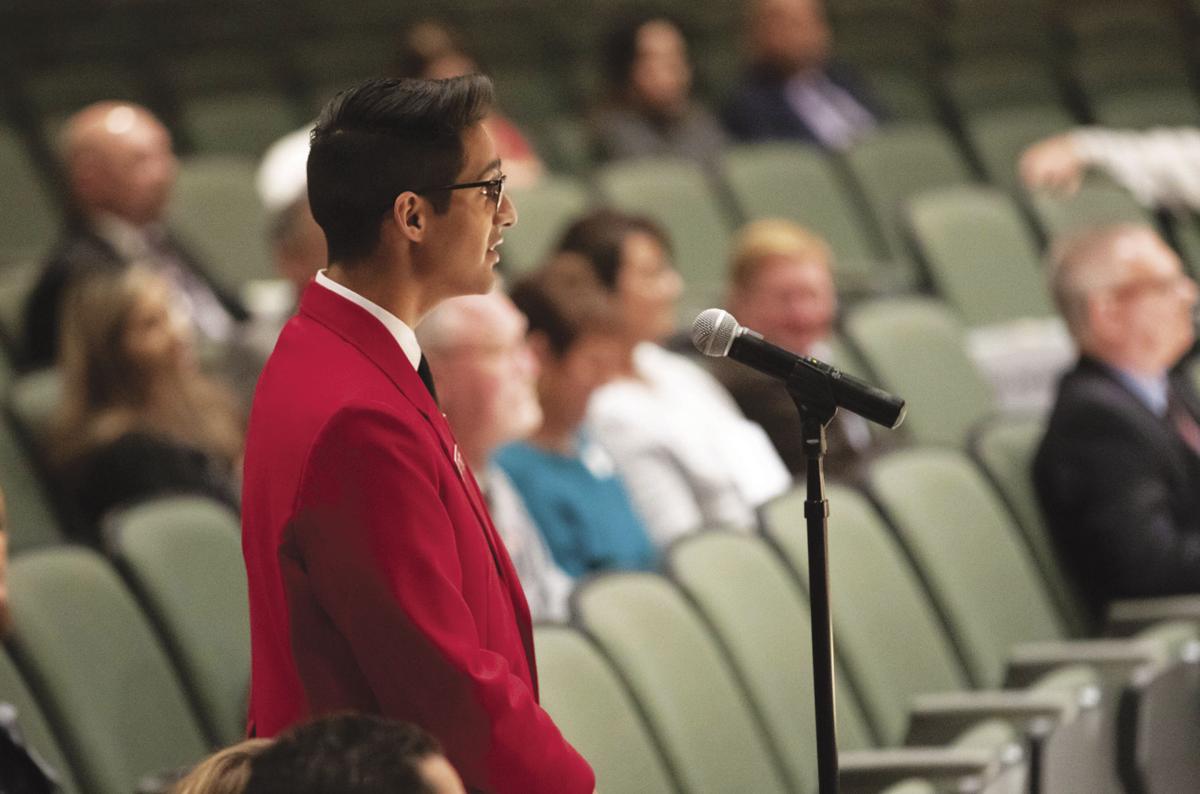 San Luis senior Miguel Nunez  asks a question of the justices during the event. 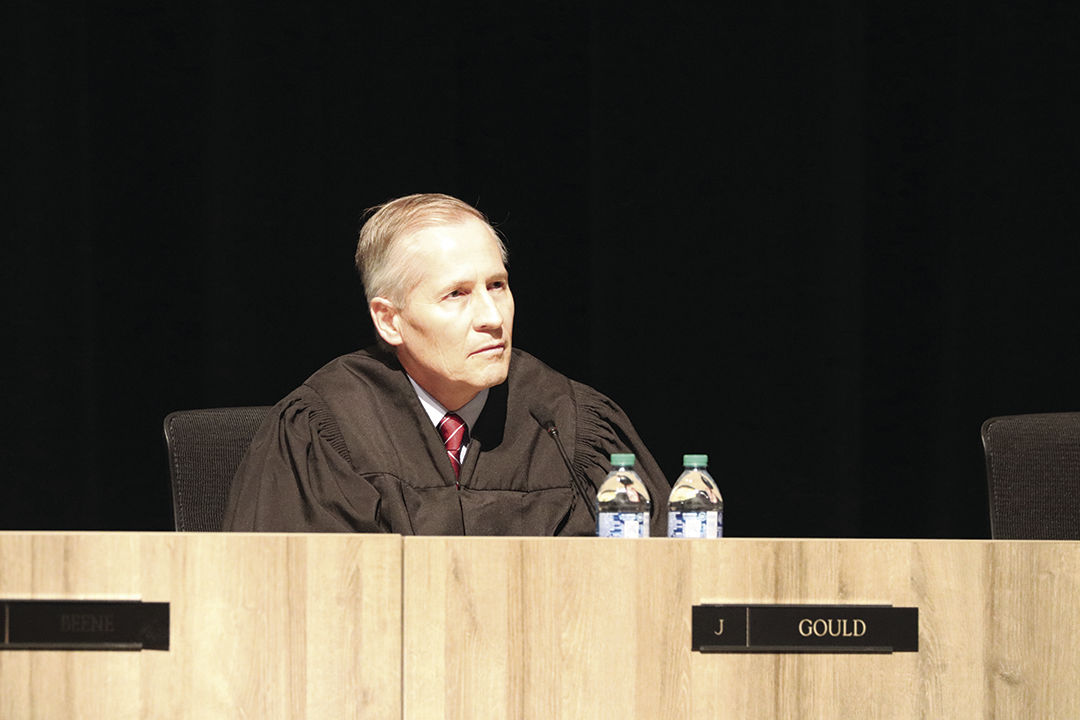 Justice Andrew Gould,  a former judge in Yuma, joined his fellow members of the Arizona Supreme Court in a visit to San Luis High School on Thursday.

San Luis senior Miguel Nunez  asks a question of the justices during the event.

Justice Andrew Gould,  a former judge in Yuma, joined his fellow members of the Arizona Supreme Court in a visit to San Luis High School on Thursday.

San Luis High School students and members of the community were able to see the “human side” of the state judicial branch Thursday morning as the Arizona Supreme Court visited their campus.

The Court goes on the road four times each year, with a trip to the Arizona State University and University of Arizona law schools to show students “what the Court does and how the Court works.” With the other trips, the Court visits high school campuses or other educational institutions outside of Maricopa County.

“We want to make it clear that we’re the Supreme Court of the state of Arizona, not the Supreme Court of Maricopa County,” said Chief Justice Robert Brutinel. “We also want to have an opportunity to interact with students and show students what we do in the hopes (of) convincing some of them that a career in the law…could be something that they’d like to aspire to.”

For students already considering a future in law, the experience gave more direction to their aspirations.

“It was great to have the opportunity to actually perceive what lawyers and judges do and not be misguided,” said San Luis student Melissa Moreno.

SEEING BEHIND THE CURTAIN

In the classic film “The Wizard of Oz,” Dorothy is surprised to find that the “great and powerful Oz” on the other side of the curtain is really just an ordinary person like herself. For some of the students present, Thursday was a similar revelation.

“We always see judges on TV that are these stern, no-smiling, very serious kind of people,” said San Luis student Miguel Nuñez. “But here, they were making jokes, talking to us (and) really just showing their authentic selves. It was a really eye-opening opportunity that we could see them (for) who they are and not just their black-coats justices positions.”

According to Nuñez, the justices’ authenticity also helped expose some unexpected correlations between law and other fields.

“One of my main reasons why I wanted to go into the medical field was I love that interaction with people and I really wanted to create those connections,” said Nuñez. “I never saw that in the law side of things, but today just really changed that point of view. Now I understand that law is about those connections.”

For Moreno, seeing the humanity in the justices and having the opportunity to speak to them on a personal level during the question-and-answer session was “enlightening.”

“Lawyers don’t have a good reputation among most of society, but seeing that human side was very refreshing and it definitely changes your perspective,” Moreno said.

According to Justice Andrew Gould, a Yuma County native, this idea of seeing the justices’ human side is just as important to them as it is to the public.

According to Brutinel, he and Gould are the first judges in 40 years to come to the Arizona Supreme Court from outside of Pima and Maricopa counties.

Before they were appointed to the court, both Burtinel and Gould served in small, rural communities, and they attribute those experiences to augmenting their sense of community and what being part of one is all about.

“When you’re a public official, specifically a judge in a small community, you can’t go anywhere without people recognizing you and knowing you – (for) the good things you do and the bad things you do,” said Gould. “You do have a much closer connection with that community, because there’s accountability when you go out in public, whereas in a place like Phoenix where there’s three million people, you can be very anonymous (and) you may not face that.”

While deeply impactful, being so intimately involved in public service in a rural community is not without its challenges, as Brutinel and Gould shared when asked whether the journey to their seats in the court was a more difficult one because of their backgrounds.

“If we had come out of Maricopa County and applied and had practiced in Maricopa County, there might be different expectations versus maybe a little bit of a prejudice that ‘Well, you’re from a small community, maybe you haven’t done the sophisticated work we’ve done here,’” said Gould. “So I think that makes people like me and the Chief work even harder – and I’m not saying that we had a higher standard, but we had a little bit of an obstacle to overcome.”

For students like Anthony Molina, who plans to work as a public defender, seeing the strides the justices have made and the way they represent their roots is an inspiration as he starts down a similar path.

“It’s very great seeing how we have Arizona Supreme Court justices coming from rural communities,” said Molina, a student at Cibola High School. “I think one thing that’s very underdeveloped in Arizona is bringing the community together. It’s very motivating seeing (them) come and…genuinely caring about what the students have to ask.”