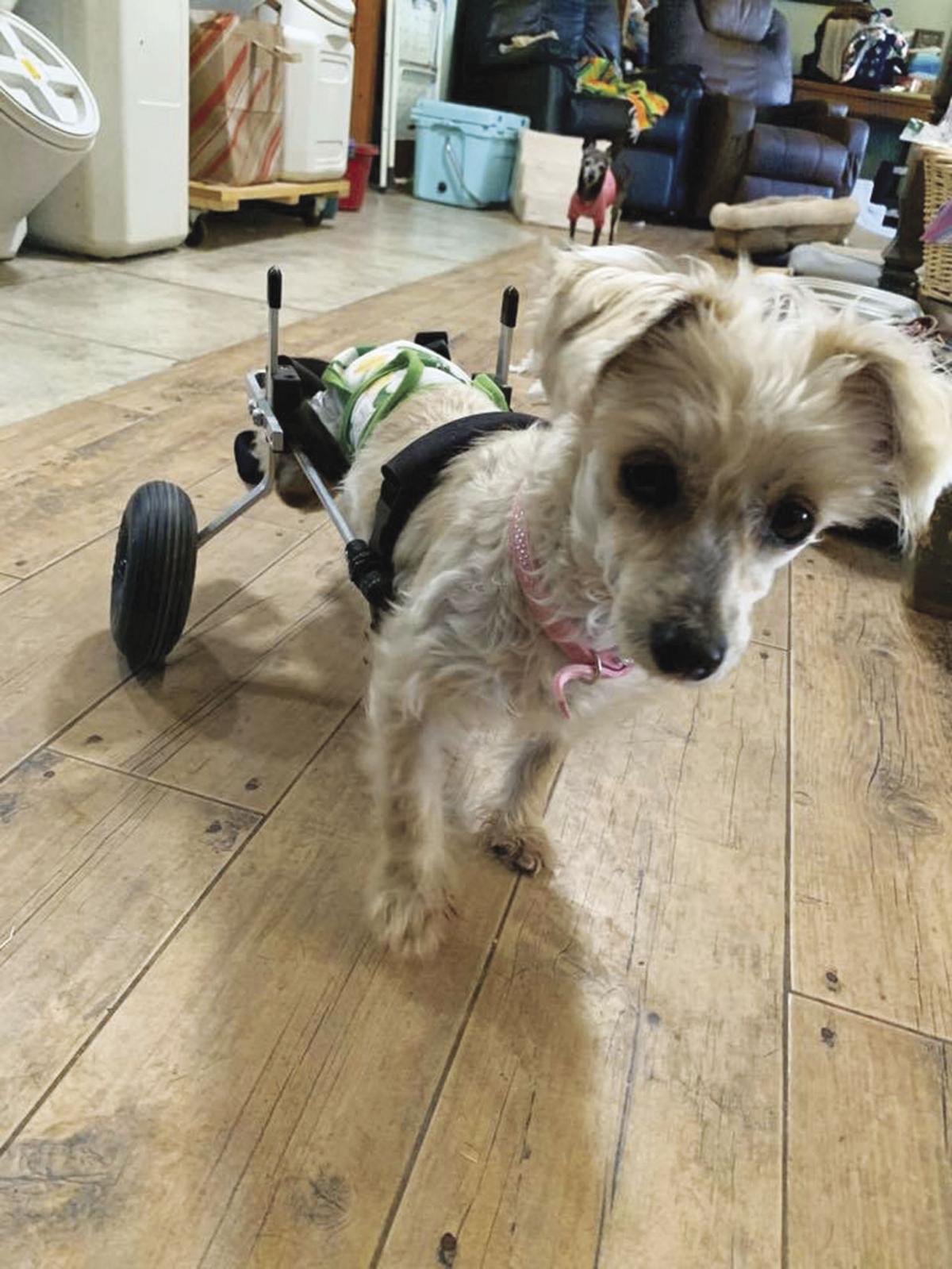 LOANED PHOTO Blanche, who gets around with a wheelchair, is among the residents of Old Souls Animal Rescue and Retirement Home. 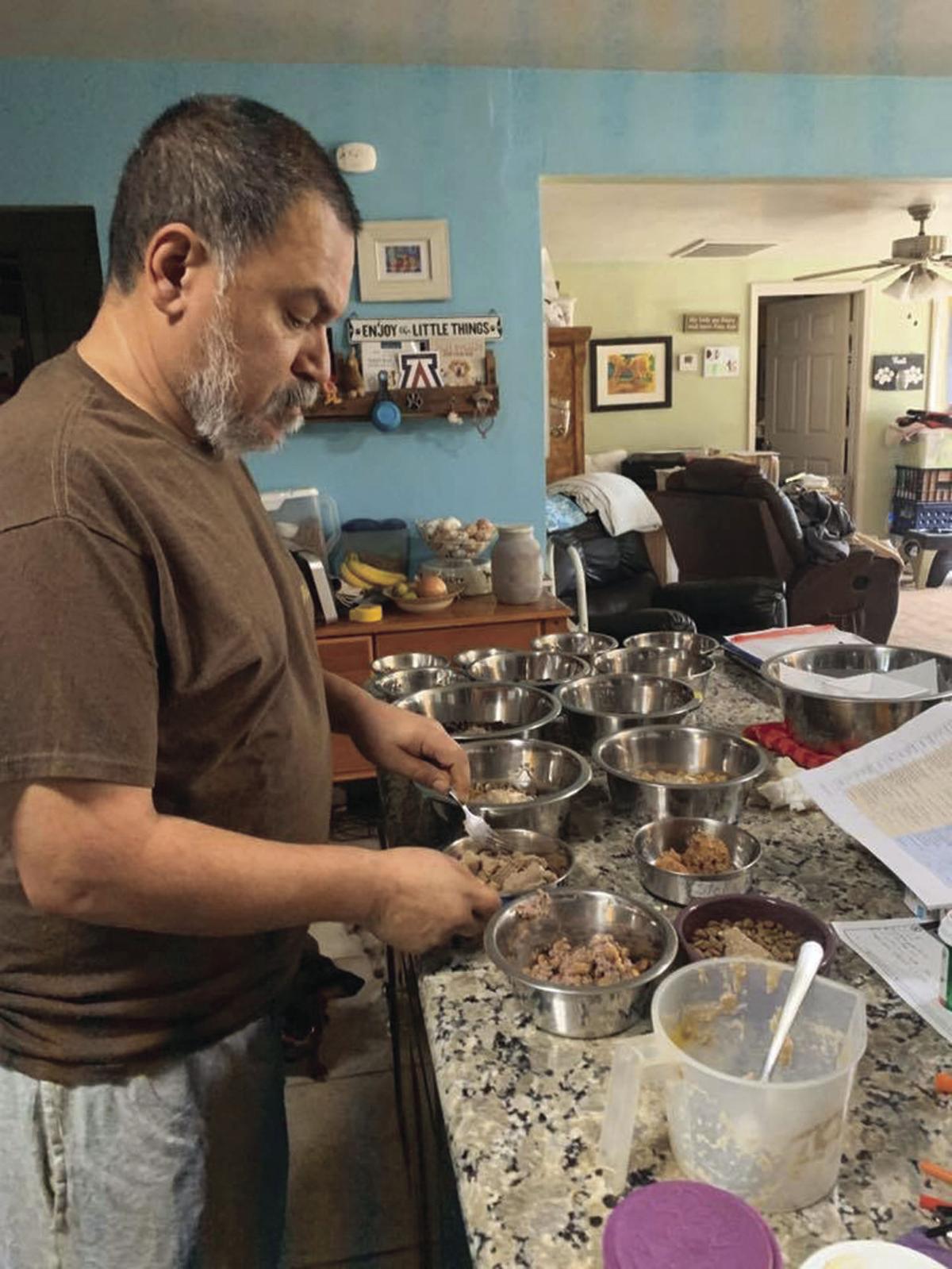 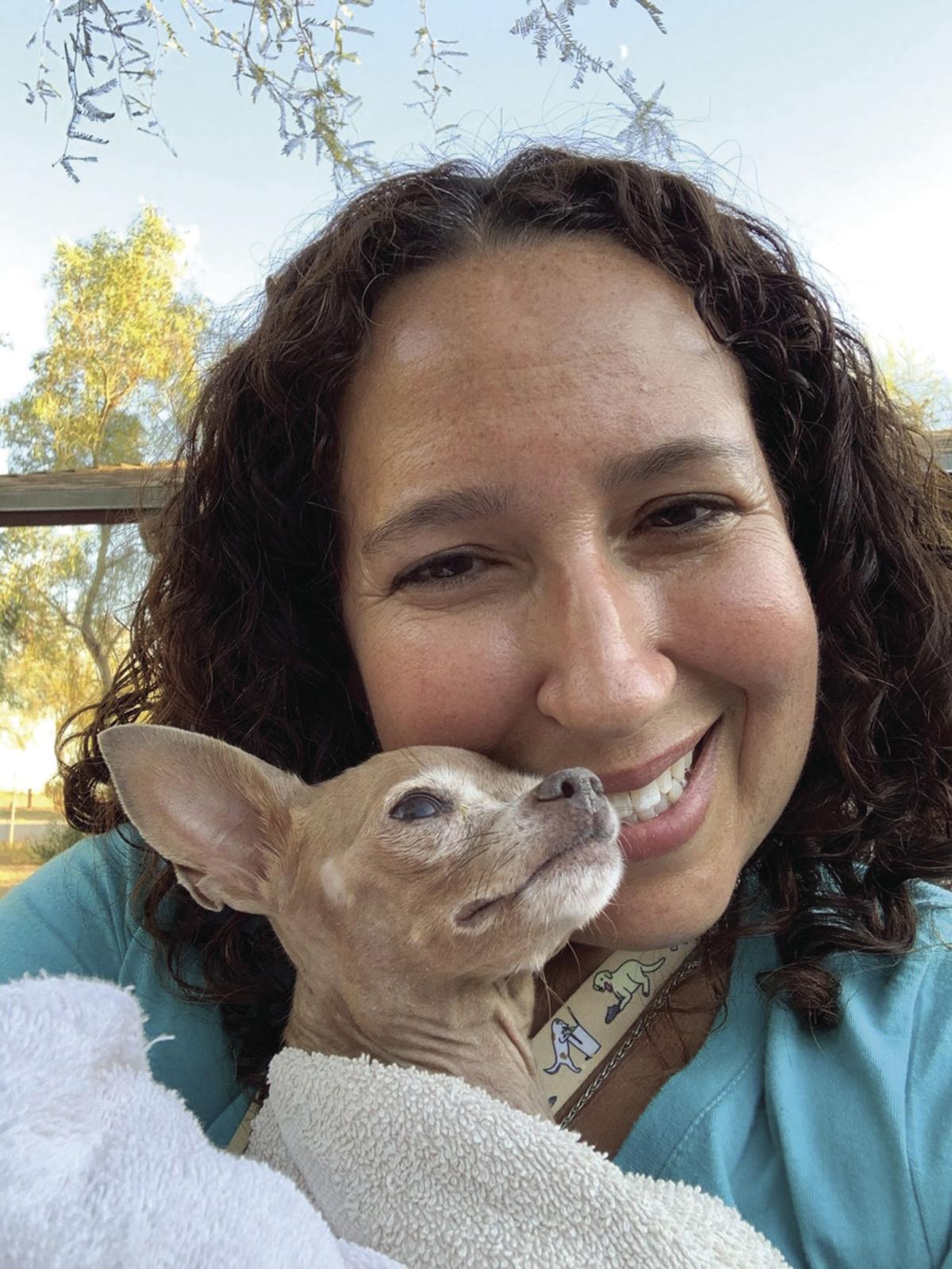 LOANED PHOTO Paula Rivadeneira cuddles with Noli, who passed away in December. She spent her last days at Old Souls after Animal Control seized her from a home where other dogs attacked her, leaving her paralyzed. 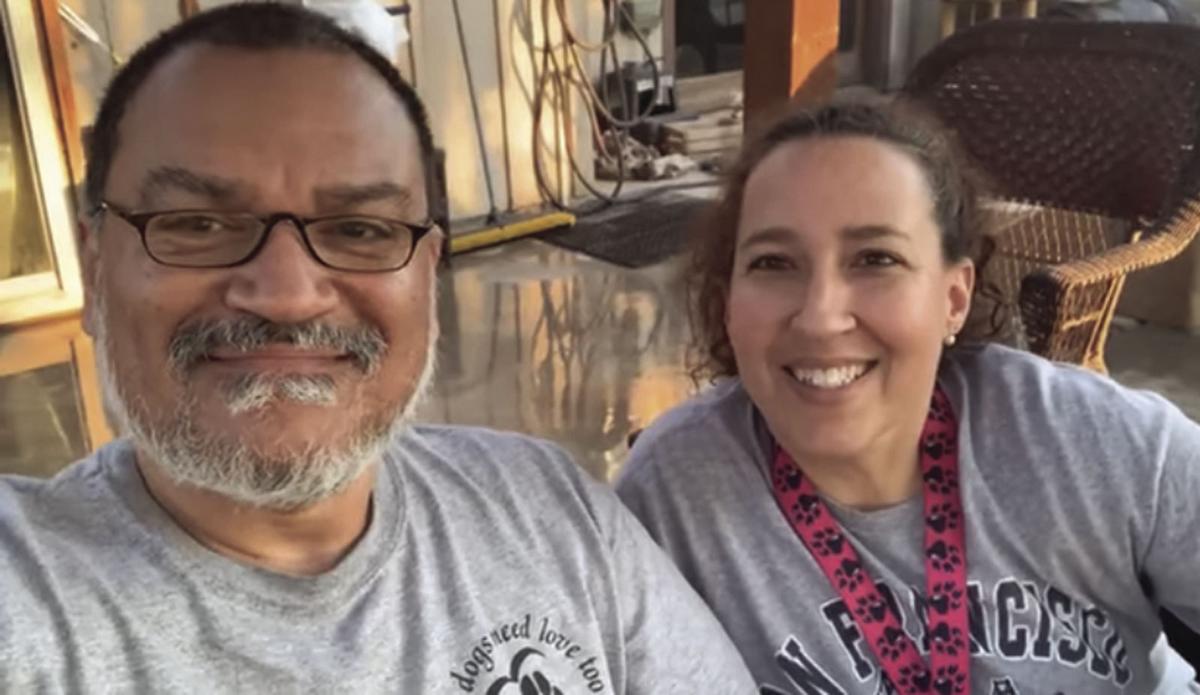 A video screenshot shows Isaac and Paula Rivadeneira announcing that Old Souls Animal Rescue and Retirement Home will be moving to Waco, Texas, in February. The founders and operators of the nonprofit organization will continue running the rescue in their new home, where Paula has accepted a job as director of the Humane Society of Central Texas.

LOANED PHOTO Blanche, who gets around with a wheelchair, is among the residents of Old Souls Animal Rescue and Retirement Home.

LOANED PHOTO Paula Rivadeneira cuddles with Noli, who passed away in December. She spent her last days at Old Souls after Animal Control seized her from a home where other dogs attacked her, leaving her paralyzed.

A video screenshot shows Isaac and Paula Rivadeneira announcing that Old Souls Animal Rescue and Retirement Home will be moving to Waco, Texas, in February. The founders and operators of the nonprofit organization will continue running the rescue in their new home, where Paula has accepted a job as director of the Humane Society of Central Texas.

A Yuma rescue for elderly, sick and hospice animals is moving to Texas, citing conflicts with neighbors and a lack of support in Yuma. They’re holding yard sales starting Friday to lighten the load before moving in February.

Dr. Paula and Isaac Rivadeneira, who founded and run the Old Souls Animal Rescue and Retirement Home, announced on Saturday with an online video that the nonprofit organization will be moving to Waco, Texas.

“We wish that we could have stayed here in Yuma forever, but we just can’t seem to get the support we need since people tried to shut us down two years ago. It has been an uphill battle,” Paula told the Yuma Sun via email.

“But we will continue to take care of all the animals in our care that came from Yuma and the surrounding areas for the rest of their lives so we hope we will continue to have the support of the Yuma community, even after we are in Waco,” she said, noting that they will continue to run their Airbnb lodging in Texas “so we hope our friends and supporters will still visit us too!”

In the video, Isaac said they were leaving for a “bunch of reasons,” one of them being that his wife got a new job. Paula, a food safety and wildlife extension specialist and professor for the University of Arizona in Yuma, will start on Feb. 10 as the executive director of the Humane Society of Central Texas in Waco.

Isaac went on to describe another reason they’re leaving Yuma. “It’s getting hard here, living in Yuma and really supporting the rescue, just with all the people that didn’t want us here, having to deal with them,” Isaac said in the video. “We just haven’t been able to get the support that we need to keep going and keep growing in Yuma.”

In 2017, the couple had been caring for up to 18 elderly and sick dogs, adopting and fostering them out when possible, for a couple of years out of their home at 11262 S. Holland Ave., in the Buntin Estates subdivision on County 11th Street, just west of Yuma, when relatives of a next-door neighbor filed a complaint. That led to county officials finding out the rescue was operating without the permit necessary to have more than five dogs living there.

The rescue also housed other animals, including cats, horses, tortoises, goats and more, which were allowed by zoning regulations.

At that time, Old Souls applied for a special use permit to operate a kennel on their property. As previously reported by the Yuma Sun, widespread support for Old Souls throughout the rest of the community and an online petition with more than 300,000 digital signers from around the world could not surmount unified opposition from the neighborhood, which triggered a requirement for the permit to get at least four votes from the Board of Supervisors for approval. Many neighbors said they supported the nonprofit’s mission but insisted that the rescue brought traffic and noise and wasn’t compatible with the residential area.

The board voted 3-2 during a meeting held in the Yuma City Hall Council Chambers to accommodate an audience of more than 200. Old Souls was also ordered to pay a $50 fine to the county for violating its zoning ordinance by having too many dogs on the property.

The Rivadeneiras began fundraising and scouting for new locations in rural parts of Yuma County, where neighbors would likely be supportive and Old Souls could meet the county’s requirements.

In 2018, the Yuma Jaycees Foundation stepped up with a donation of 8.5-acres about half a mile south of the Yuma Jaycees’ clubhouse at 2577 E. County 14th St. The foundation board unanimously voted to donate the land, which was being leased by a farmer.

As to what will happen with the donated land now that they’re moving, Paula told the Yuma Sun: “We are currently making plans regarding the land that was donated to us by the Yuma Jaycees Foundation so we will update you as soon as we know more.”

The Rivedeneiras’ home will be up for sale as soon as they move out and paint it.

Although some of the animals are being adopted by their foster families, most of the foster animals are going with them. “We will be moving with 20 dogs,” Paula said. “We will also be taking all of our other animals with us, including the steer, pigs, goats, hens and tortoises so we are hoping that some of our supporters here in Yuma will be willing to make the drive with us, especially those with trucks, livestock trailers and RVs.”

However, Isaac noted that if someone is interested in giving one of the dogs a good home, “we would love for that to happen.” Chickens, some that are too old and might not make it through the trip, are also up for adoption.

Aspiring adoptive parents will undergo a vetting process as usual. “We want to make sure these animals go to a good home,” Isaac said.

The Rivadeneiras expressed appreciation for the support they received in Yuma. “We’re super, super appreciative of all the people that did support us,” Paula said in the video. “We have a lot of amazing volunteers that have stood by us through the time we have been here, and we’re so appreciative of that.”

“It’s been really great in Yuma. We’ve been able to grow the rescue to a level even we didn’t know we could,” Isaac added.

“We’ve just gotten so much bigger than we could have ever anywhere else, and we love our home here. We thought this would be our last place to live so now we are disappointed to leave here but super grateful for everything that Old Souls has become here,” Paula noted.

“We hope that you guys continue to support us whether you live in Yuma or you live in Texas or anywhere along the way,” she added. “Because we’re going to continue Old Souls going, no matter what, no matter what it takes. And we know that we have all these geriatric, special needs and hospice animals that we can’t take care of without your help.”

Beginning this weekend, Old Souls Animal Rescue and Retirement Home will hold yard sales at the Old Souls Hacienda, 11262 S. Holland Ave., on Friday, Saturday and Sunday and then again on Jan. 18, 19, 24 and 25, with new items being put out every day.

Among the items for sale will be furniture, cycling gear, lots of contractor materials, tools, landscaping items and pet supplies, including dog cages, pads, dog clothes and bowls.