A young girl and boy play during late March at Gateway Park along the bank of the Colorado River which is running higher than normal due to the "pulse flow" brought about by Minute 319. 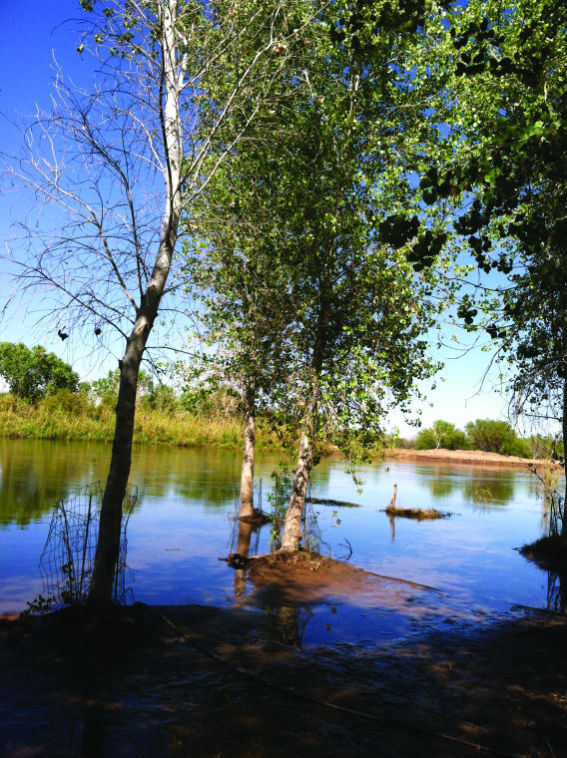 Cottonwoods in East Wetlands are getting a good soaking with the higher river as a pulse flow runs past Yuma, emulating a spring flood.

A young girl and boy play during late March at Gateway Park along the bank of the Colorado River which is running higher than normal due to the "pulse flow" brought about by Minute 319.

Cottonwoods in East Wetlands are getting a good soaking with the higher river as a pulse flow runs past Yuma, emulating a spring flood.

Mexico’s Colorado River delta isn’t the only wildlife habitat that is benefiting from a temporary increased flow of water down the Colorado River to replicate spring flooding along the river’s riparian area.

The cottonwoods and willows and other native vegetation planted in the East Wetlands also are getting a good soaking.

“The wetlands and marsh love the water,” said Charles Flynn, executive director of the Yuma Crossing National Heritage Area that oversees the area. “We wanted a higher river. It’s vital to its restoration.”

The additional water flowing in the river stems from a groundbreaking Colorado River agreement negotiated in 2012 between the U.S. and Mexico known as Minute 319 to the 1944 U.S.-Mexico Water Treaty. The water is some of Mexico’s river allocation that has been stored in Lake Mead since the 2010 Easter earthquake damaged that country’s water delivery infrastructure.

During an eight-week pulse flow, 105,392-acre-feet of water is being released from Lake Mead to be delivered to the environment in the former river delta south of the international border. The hope is that the surge in water, emulating a spring flood, will carry willow and cottonwood seeds to root downstream and begin the healing process of the barren riparian area that once was a thriving wetland ecosystem.

The release began on March 18 and reached Morelos Dam near Algodones on March 23, peaking later that week. The flow will continue at a declining rate until May 18. After that, a base flow of 52,000-acre-feet will continue to provide a slow but steady supply of water to sustain the saplings’ growth.

On its way downstream, through, the higher river is benefiting Yuma, Flynn said.

But it took some careful planning, he noted.

It was determined that a flow of up to 3,000 cubic feet per second wouldn’t damage anything in the Yuma area, he said. “We coordinated with the Bureau of Reclamation so we got the flow we wanted and no more than that. We haven’t seen any damage.”

In anticipation of the pulse flow, the south channel in the East Wetlands used to flood irrigate the East Wetlands was emptied, Flynn said. It was then opened up so it could be inundated with river water to be slowly drained in an historic pattern of natural flooding.

“That’s precisely what we want,” Flynn said. “That’s why we built the south channel ... to mimic natural flooding. And it’s having a phenomenal impact on the wetlands. It’s the nature of native habitat to have an ebb and flow.”

He said the cottonwoods with their roots in water “are drinking it up. As the river recedes, the soil around them will still be very wet. It’s great for them. Soon it will be July and hot and dry.”

People also are enjoying the river being higher, Flynn said.

“The kids are enjoying it,” said Leann Straub, who was there with a friend and their children.

She observed that the river was noticeably higher, perhaps eight feet further up the beach. “The last time we were here, we were almost able to wade across.”

Mark Van Voorst, Kofa High School assistant track and field coach, was at the park with the team over spring break to have fun and get some exercise.

“I did notice it was higher,” he said. “But the water is still cold.”

Further upstream at Fisher’s Landing, the sand bars where people would stop are now submerged.

And the river was lapping at some of the trailers in the campground. But otherwise, all the buildings and boat ramps were fine, employees of the store there reported.

Sunshine and clouds mixed. A stray shower or thunderstorm is possible. High 96F. Winds ESE at 5 to 10 mph.

Partly cloudy skies. A stray shower or thunderstorm is possible. Low near 75F. Winds ESE at 10 to 15 mph.