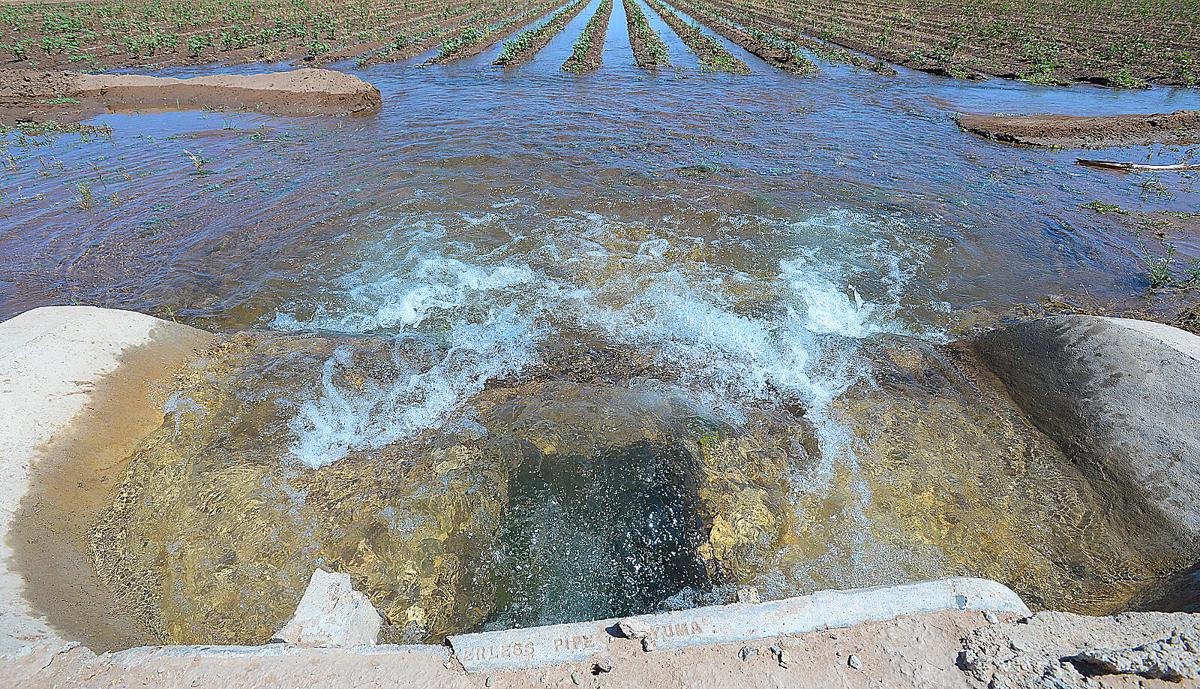 Water flows Thursday morning from an irrigation canal into a cotton field in the Gila Valley east of Laguna Dam Road, between County 6th Street and County 7th Street. 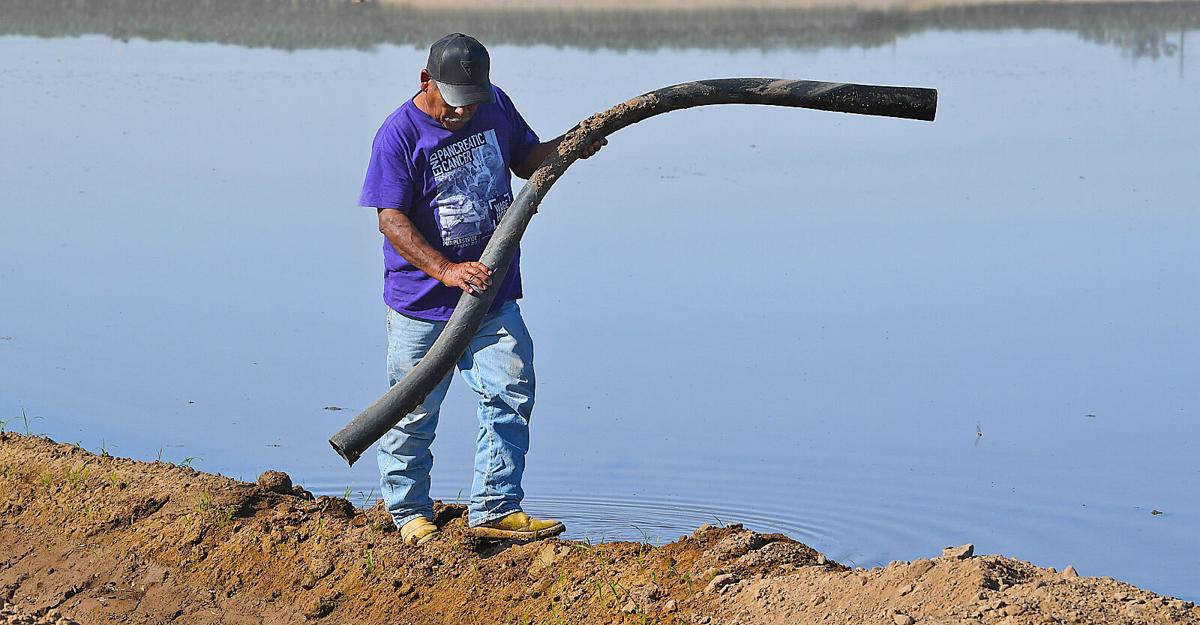 An irrigator moves a 3 1/2-inch syphon tube to another location along the berm of a field being flood irrigated Thursday morning in the Gila Valley north of U.S. 95 and east of County 10E. 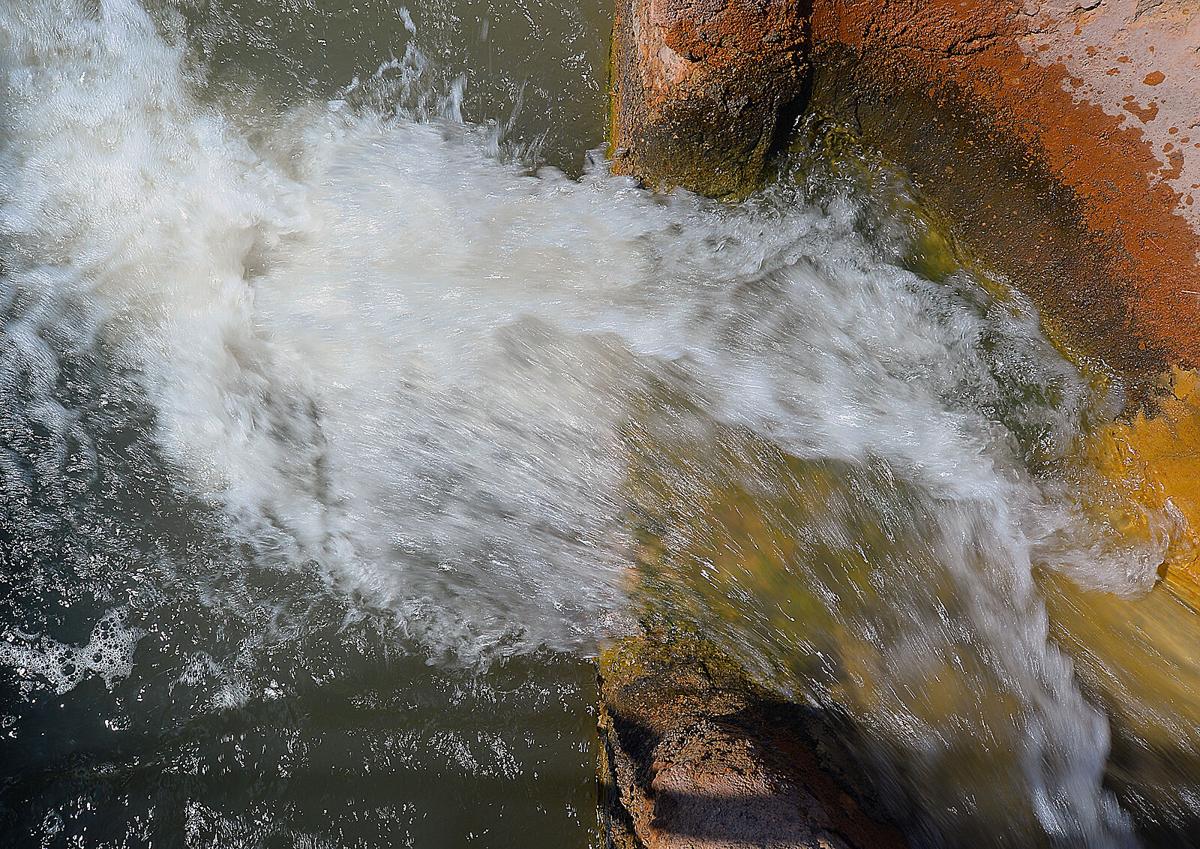 Water flows Thursday morning from an irrigation canal into a cotton field in the Gila Valley east of Laguna Dam Road, between County 6th Street and County 7th Street.

An irrigator moves a 3 1/2-inch syphon tube to another location along the berm of a field being flood irrigated Thursday morning in the Gila Valley north of U.S. 95 and east of County 10E.

Given conditions along the Colorado River system after 21 years of drought and little relief forecast, it’s likely that for the first time a shortage will be declared for 2022 for the river’s Lower Basin.

That won’t have much impact, at least initially, for most of the contract holders to the river’s water, including Yuma County municipalities and agriculture.

All contract holders in Yuma County, among them irrigation districts, hold senior rights to the river’s water, explained Tom Davis, general manager of the Yuma County Water Users Association. “No one in Yuma County should be impacted (by a shortage declaration).”

It will have a significant impact, however, on central Arizona, where farmers in Pinal County will bear the brunt of a reduction of 320,000 acre-feet of water diverted to the Central Arizona Project and carried by a 336-mile canal from the river to central and southern Arizona. That’s because contract holders for CAP water have junior or low priority rights to the water. The shortage declaration also would eliminate the water banking and groundwater replenishment Arizona has been doing for several years.

At least that’s the law of the river, a river that officials now acknowledge was overallocated, Davis cautioned. “But there could be political maneuvering. There will be deal making.”

The Colorado River provides water for 40 million people and some 5.5 million acres of farmland in the states in the Lower Basin: Arizona, Nevada and California. Arizona is entitled to 2.8 million acre-feet a year of that water, of which 1.4 million acre-feet plus any unused portion of the state’s supply is carried to central Arizona by the CAP canal, with any excess stored underground.

According to a deal struck to gain the California congressional delegation’s backing for approval of a bill in 1968 to allow the construction of the CAP, Arizona’s CAP contract holders had to agree to have junior rights to everyone else and take the largest share of water cutbacks if a shortage were ever declared for the river. The 2007 Colorado River Guidelines signed by all seven river basin states established those reductions, with a cutback of the CAP supply by 30 percent that would eliminate water banking and severely curtail the agriculture supply. Pinal County ranks first in the state in cotton, barley and livestock production. A 2019 study from the University of Arizona calculated that agriculture within Pinal County generates $2.3 billion of Arizona’s $23 billion agriculture industry.

Nevada’s allotment would be reduced by 13,000 acre-feet and Mexico by 50,000 acre-feet. California would not be impacted, at least initially. But that state, too, is facing a water crisis, with widespread drought conditions, declining reservoirs and fears of another disastrous wildfire year.

“Because of the prolonged drought, we knew the day would come when a shortage would be declared,” said Wade Noble, a Yuma attorney who specializes in water issues.

The Drought Contingency Plan passed in 2019 established and financed projects that would leave water in Lake Mead in an attempt to avoid or at least delay that shortage declaration.

However, as of May 4 the water level in Lake Mead, a major reservoir on the Colorado River that is the lifeline to the desert Southwest, was about 38 percent full at just over 1,078 feet above sea level. The Drought Contingency Plan states that a Tier 1 official shortage is to be declared in the river’s Lower Basin for the following year when it is forecast in August that Lake Mead will drop below 1,075 feet on Dec. 31. If current conditions continue, there’s little chance of enough water reaching the reservoir to reverse the decline to the trigger level for a water shortage to be declared for calendar year 2022.

The current forecast is that Lake Mead’s level will fall to 1,068 feet on Dec. 31, seven feet below the threshold for a Tier 1 shortage declaration. Tiers 2 and 3 likely won’t be far behind, because the reservoir is “V” shaped so the lower the level the less actual water stored, Noble explained. Tier 2 would be declared when the reservoir’s level dips to 1,050 feet and Tier 3 when the level reaches 1,025 feet.

Davis isn’t entirely ruling out a miracle, though. “The shortage isn’t guaranteed,” he said. “They do a study in August. We have to wait until August, then we have to wait until Jan. 1, 2022, to see what happens. This is the closest we’ve come to a shortage. It’s been nowhere normal, but we could see precipitation. It’s happened before. We could have a precipitation event in the fall. You can predict all you want but you can never know what might happen.”

It’s fortunate, Davis said, that when the drought started in 2000, Lake Powell was full and Lake Mead was nearly full. Measures taken over the years to conserve water and keep as much water as possible in Lake Mead have also helped.

For example, agriculture in Yuma County has reduced its water use significantly over the last 40 years, Noble said. The reduction has been achieved through such improvements as laser leveling, more efficient irrigation systems, changes to farming methods and a shift away from summer crops to the winter production of high-value vegetables so there’s less irrigation during the hottest months of the year.

“Agriculture here has done its part to save water,” said Noble. “We’ve increased production by 25 percent while reducing water use by 10 to 15 percent. Over the decades, millions of acre-feet of water went to Pinal County from Yuma County. We’re criticized heavily for not doing anything. But we’ve simply farmed better so others get the benefit of our farming practices and water saved.”