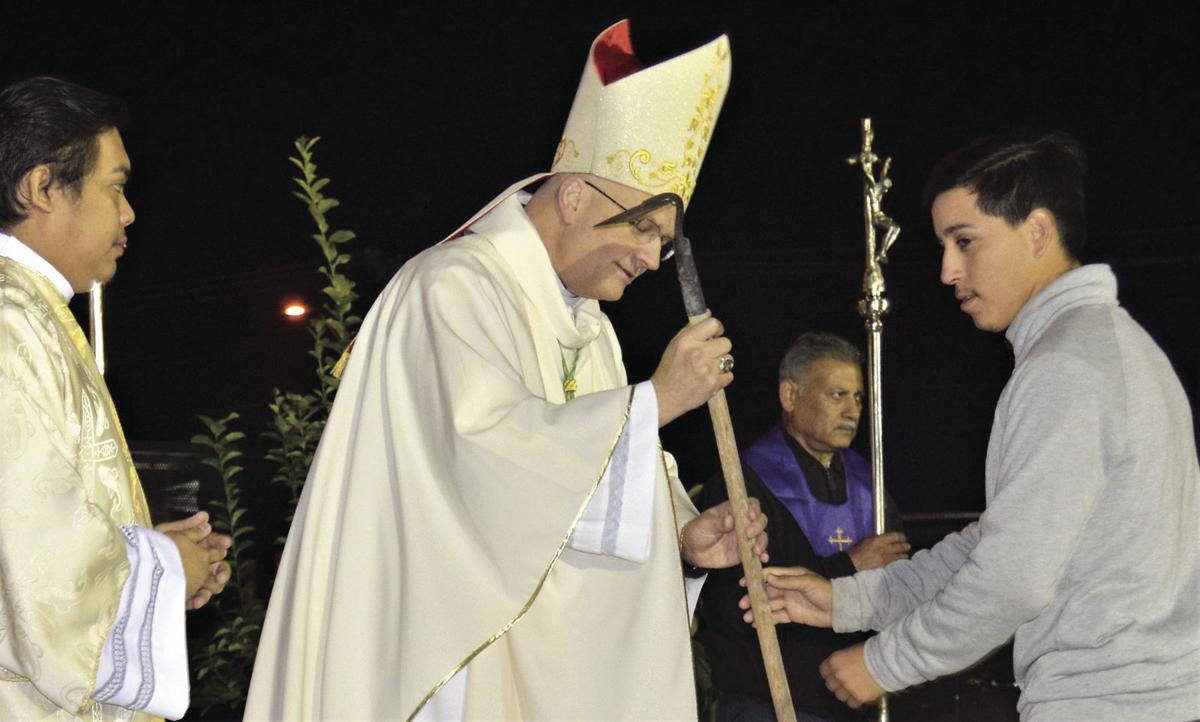 A parishioner presents a hoe to Tucson Bishop Edward J. Weisenburger as an offering during a Mass Friday morning to honor farm workers.

A parishioner presents a hoe to Tucson Bishop Edward J. Weisenburger as an offering during a Mass Friday morning to honor farm workers.

SAN LUIS, Ariz. – The contributions of farm workers were celebrated Friday before dawn in a Mass that brought Bishop Edward J. Weisenburger of the Catholic Diocese in Tucson to Amistad Park here.

With nearly 150 agricultural laborers and area parishioners gathered, the occasion marked the third time Weisenburger has traveled to San Luis for the purpose of offering the traditional Mass in Honor of Farm Workers. And it was the first time since 2009 that the Mass has taken place in Amistad Park, shuttered several years ago but reopened for the bishop’s visit.

The ceremony began in the park next to the border at 4 a.m., as many of the workers were crossing from Mexico on their way to fields in the Yuma area.

Farm workers who attended the Mass presented offerings, among them fruits and vegetables from the field and a hoe and knife used to harvest lettuce grown in the area.

“It is important that we remain united with the agricultural workers,” Weisenburger said following the Mass. “The people go and harvest the foods we eat, they take care of us and feed us. We have to remain close with them as a community.

Weisenburger stressed the need for all to recognize the work performed by farm workers.

“We must express our gratitude for these people who get up in the middle of the night to come to work. I do it sometimes in hospitals to be with people who are dying, but I don’t do it every night.

“Today I got up at 2:30 in the morning to come to this Mass, and I wanted to stay in bed. But I know that the people who came to this Mass get up in the middle of the night to take care of us, so it is a privilege and an honor to celebrate Mass,” Weisenburger said.