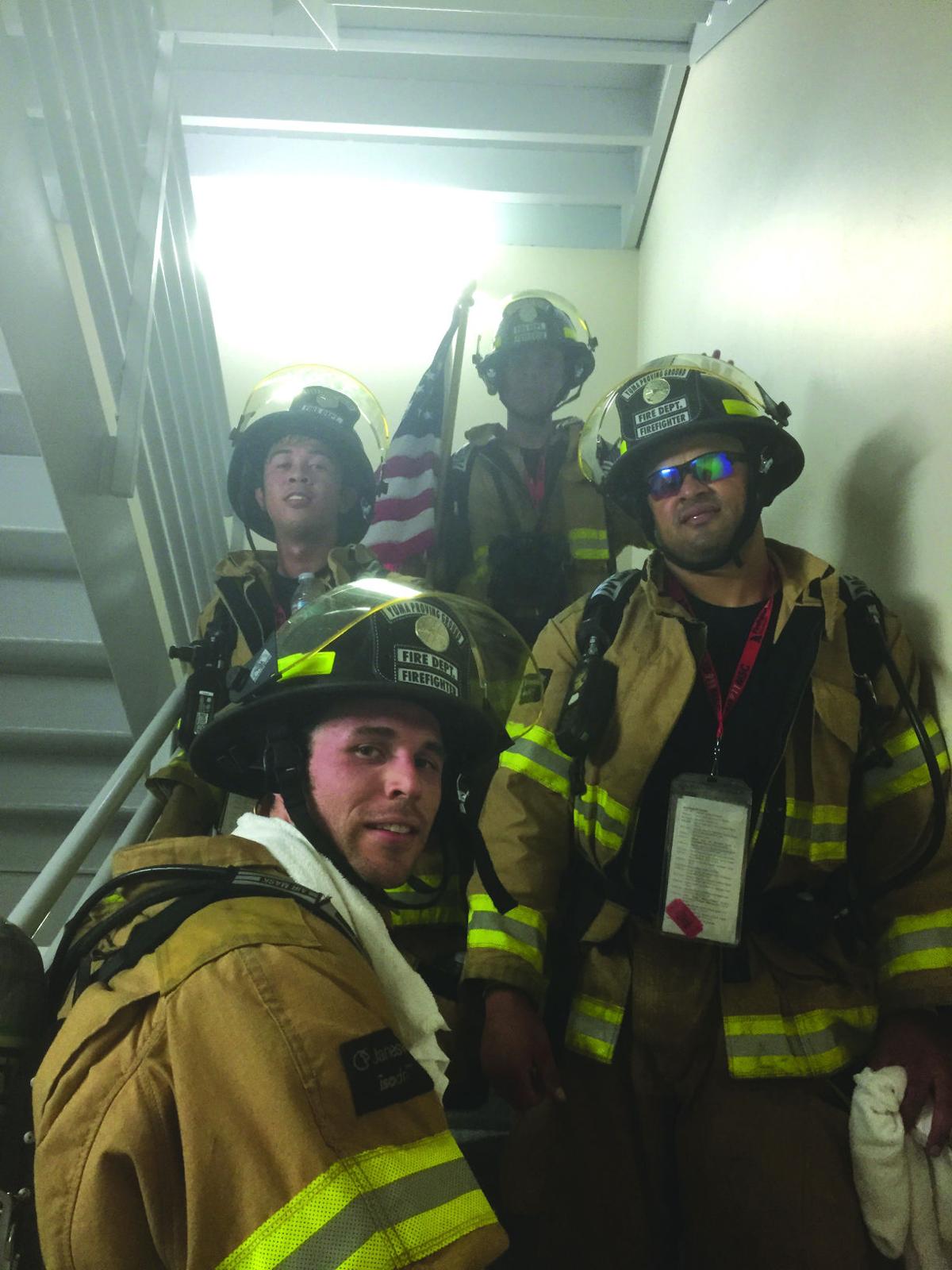 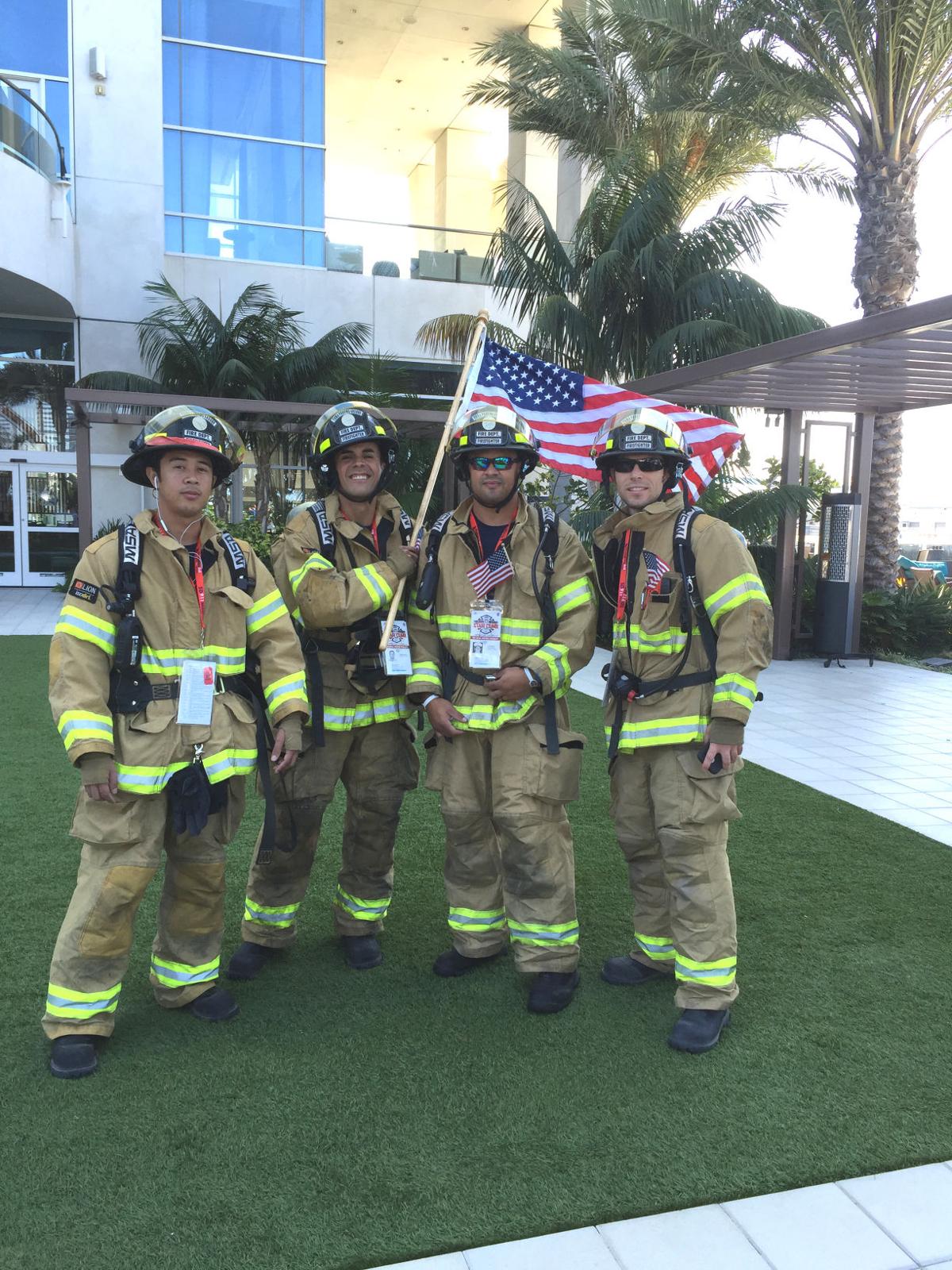 As part of the 14th anniversary of the Sept. 11 terrorist attacks, four firefighters from the Yuma Proving Ground Fire Department recently took to a hotel stairwell to honor and remember their brethren who died trying to save lives that morning, and to raise money for a cause close to their hearts.

The 5th annual San Diego 9/11 Memorial Stairclimb was held on Sept. 5 at the Hilton San Diego Bayfront Hotel, and among the many firefighters from around the country and world who were participating were YPG firefighters William Sessions, Daniel Decarlo, Robert Wood and David Oblima.

“I’m so happy I had an opportunity to do something like this in my career,” said Sessions, who is also an emergency medical technician (EMT). “I can’t believe it has been 14 years already. I can still remember it like it was yesterday.”

In addition to paying tribute to the 403 emergency responders who fell that fateful morning, Sessions said the event also benefits FirefighterAid, a San Diego-based 501(c)(3) that cares for firefighters and their families in time of crisis and need.

Sessions, who was a Staff Sgt. in the U.S. Air Force at the time, and the captain of the Fire Station on Vandenberg Air Force Base, which is near Lompoc, Calif., said the terrorist attacks hit him hard as he watched the event unfold on television.

“I was in the military, a firefighter, and in a fire station the morning it happened,” said Sessions, who has been at YPG Station 1 since 2005. “It was pretty crazy.”

Taking part in the Stairclimb event was also personally meaningful for DeCarlo, who joined the U.S. Air Force a year after 9/11 happened to become a firefighter. He has been at YPG for the past seven years.

“That day was very emotional for me,” DeCarlo said. “I wanted to do the event to honor the firefighters and first responders who gave so much for others that day.”

Like many of their fellow firefighters who took part in the event, Sessions, Decarlo, Wood and Oblima all chose to make the climb in full gear, roughly 60 pounds worth, just like the men and women did inside the World Trade Center during the attacks. They also carried with them an American flag.

Sessions explained the hotel had 30 floors and they did it three times, which was roughly equal to 110 stories, the height of the twin towers. He added while it was a tough climb, it was worth every step.

“It was hot and humid in the stairwell because there was no air conditioning,” Sessions said. “We didn’t want to fail, so we pushed each other.”

DeCarlo said they only found out about the event a few months before it was held, after a co-worker found an advertisement for it, which didn’t give them much time to prepare.

To train for the event, DeCarlo said they would go up and down the stairs of the airfield control tower near fire station 1, which is adjacent to Laguna Field. He added they would train during whatever free time they had and would usually be early in the morning or late in the evening in order to avoid the heat.

Also, as part of the stair climb event every firefighter was given a name tag with a picture of a firefighter or first responder who died that day, so they would know who they were climbing for. There was also a piece of a steel girder from one of the twin towers and each of the firefighters were allowed to touch it and ring a bell while saying the person’s name.

Sessions and DeCarlo say they plan to participate in the event every year and hope to get more Yuma area firefighters to join them.