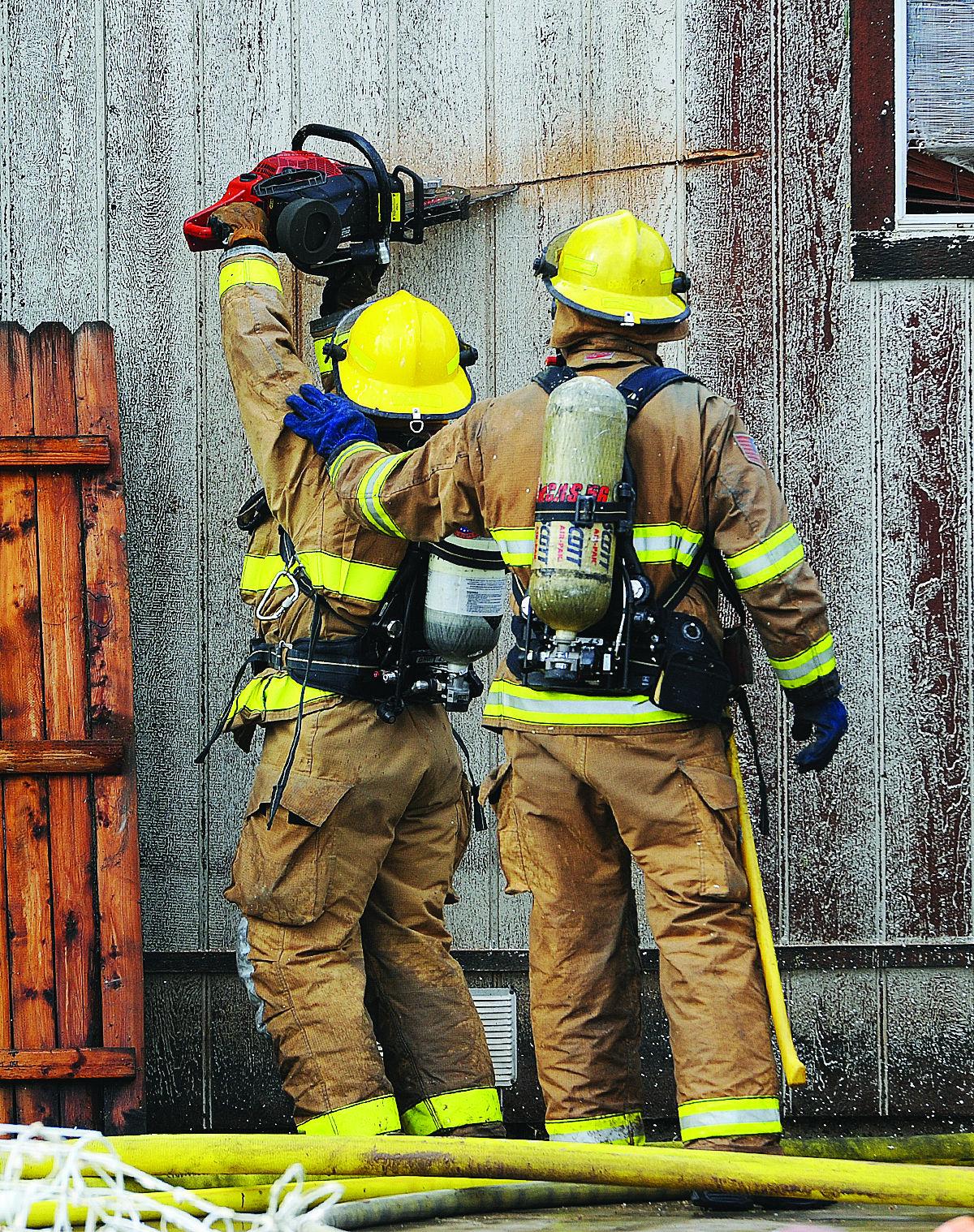 Firefighters from the Marine Corps Air Station Yuma Fire Department use a power saw to cut an opening in the side of a house at 1182 W. 34th Place that caught fire Friday morning.

Firefighters can be seen dragging a hose across Avenue A while fighting a house fire Friday morning at 1182 W. 34th Place.

Firefighters from the Marine Corps Air Station Yuma Fire Department use a power saw to cut an opening in the side of a house at 1182 W. 34th Place that caught fire Friday morning.

Firefighters can be seen dragging a hose across Avenue A while fighting a house fire Friday morning at 1182 W. 34th Place.

Yuma firefighters had to battle gusty winds and downed power lines Friday morning as they put out a fire in an abandoned home in the 3400 block of S. Avenue A, directly across the street from the city's Fire Station #2.

Fire Department spokesman Mike Erfert said just after 10:30 a.m. a house was reported on fire at the Avenue A address and that when firefighters arrived on scene they found heavy smoke and flames coming from the house at 1182 West 34th Place.

With the wind gusting, Erfert said firefighters were initially concerned the fire could spread to nearby residences, but they were able to contain it quickly. One neighboring home, however, did sustain some minor damage due to the intense heat of the fire.

"Firefighters were on scene very quickly there and were dealing with extensive fire and smoke coming from the building," Erfert said. "With the wind like it was, and power lines that had come down during the fire, there were a number of safety concerns."

Erfert added that a palm tree at the golf course across the street, to the west of the home, also ignited and had to be extinguished by firefighters. Firefighters remained on the scene for several hours dealing with hot-spots and flair-ups in the debris.

"I believe some trees that were on an adjoining property did catch fire," Erfert said. "We also had a palm tree across the street at the golf course that caught embers and started on fire."

Abel Figueroa, who came to Yuma last month from Salinas, said while he did not see how the fire started, he was talking on the phone to his wife when it happened.

"She told me the house on the corner was on fire," Figueroa said. "Since I was close by, I came home to make sure my family was okay and get them out of the house."

Traffic on Avenue A was blocked off from 32nd St. to south of 34th Place until approximately 2:30 p.m. Erfert said during the early stages of fighting the fire, motorists were driving over the water hoses firefighters had laid from hydrants along Avenue A.

The house where the fire occurred had been vacant. Erfert said neighbors complained of having problems with unauthorized persons staying in the house.

Fire investigators also remained on the scene attempting to determine the cause of the fire.

Sunny to partly cloudy. Near record high temperatures. High near 85F. Winds NNE at 10 to 15 mph.