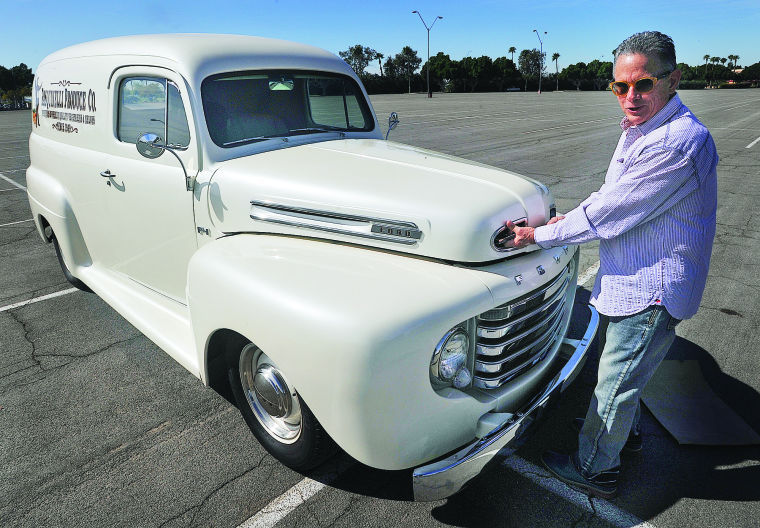 Gary Pasquinelli talks about his 1949 Ford panel truck, which is entered in this weekend's 2014 Midnight at the Oasis presented by the Caballeros de Yuma car show at Ray Kroc Baseball Complex, as he pops the hood to show off the 2014 Mustang GT 4.6 liter motor inside. 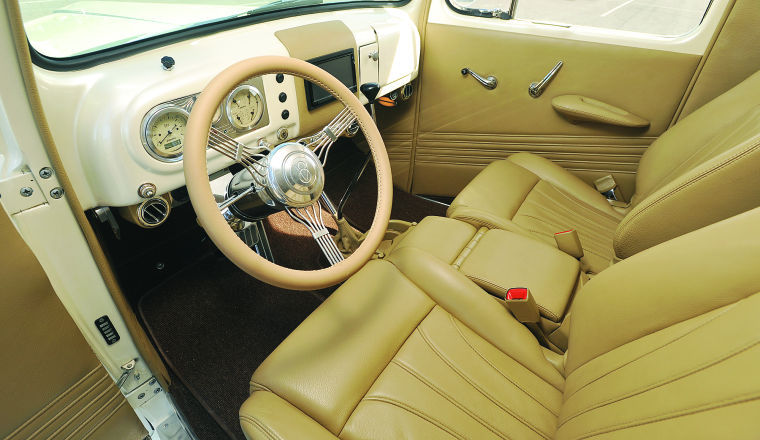 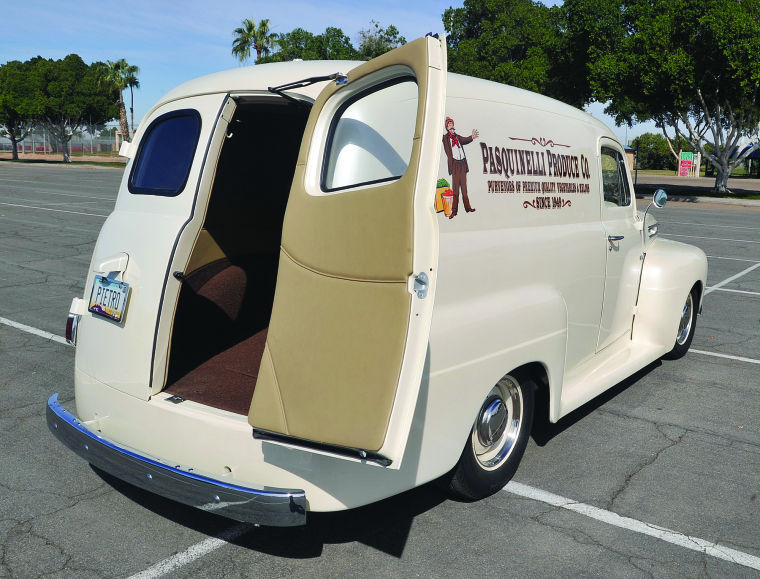 Gary Pasquinelli's 1949 Ford panel truck, which is entered in this weekend's 2014 Midnight at the Oasis presented by the Caballeros de Yuma car show at Ray Kroc Baseball Complex, is a study of grace and beauty both inside and out. 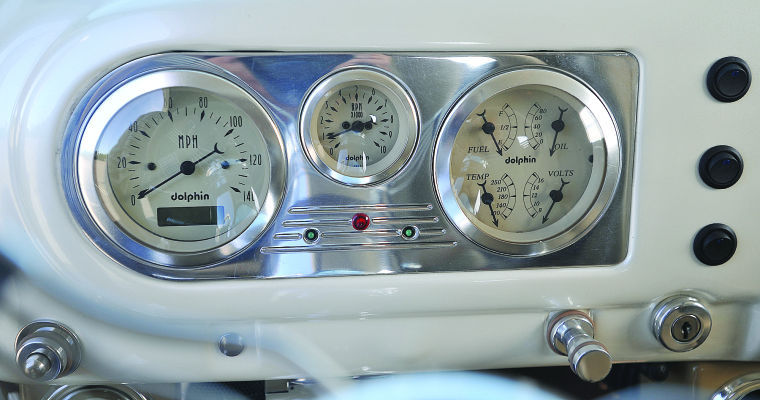 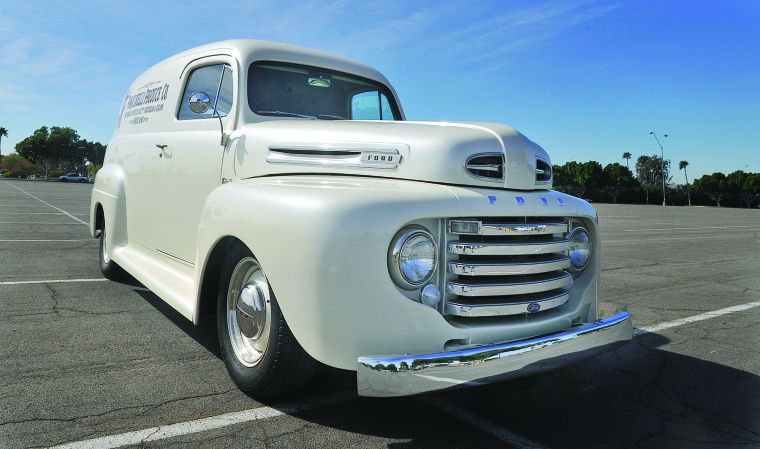 Gary Pasquinelli's 1949 Ford panel truck, which is entered in this weekend's 2014 Midnight at the Oasis presented by the Caballeros de Yuma car show at Ray Kroc Baseball Complex, is a study of grace and beauty.

Gary Pasquinelli talks about his 1949 Ford panel truck, which is entered in this weekend's 2014 Midnight at the Oasis presented by the Caballeros de Yuma car show at Ray Kroc Baseball Complex, as he pops the hood to show off the 2014 Mustang GT 4.6 liter motor inside.

Gary Pasquinelli's 1949 Ford panel truck, which is entered in this weekend's 2014 Midnight at the Oasis presented by the Caballeros de Yuma car show at Ray Kroc Baseball Complex, is a study of grace and beauty both inside and out.

Gary Pasquinelli's 1949 Ford panel truck, which is entered in this weekend's 2014 Midnight at the Oasis presented by the Caballeros de Yuma car show at Ray Kroc Baseball Complex, is a study of grace and beauty.

In 1949, Pete Pasquinelli went into business for himself.

It was a milestone year in the history of the Yuma family that rose to icon status in the agriculture industry as Pasquinelli Produce.

So it is no coincidence that the vehicle Gary Pasquinelli is entering in the 2014 Midnight at the Oasis car show is a 1949 Ford panel truck, a beautiful, rolling tribute to his father.

The vehicle, which took nearly three years to complete, is similar to the truck his father used to drive in the early 1940s delivering produce to small markets in and around San Jose, Calif., where the Pasquinelli family settled after coming to the United States from Italy, said Gary Pasquinelli.

“Dad had a ’44 or ’45 panel truck to deliver here and there,” said Pasquinelli. “Dad and a partner had a stall at the San Jose Produce Market. Then one winter they couldn’t get any lettuce, nothing was coming. And so he was curious and he told his partner to watch the store at the market and he took a trip down to the Imperial Valley, and he was just blown away by what they were doing.”

The next year, in the winter of 1946, Pasquinelli said his father, along with another partner, put his life savings in 20 acres of lettuce in the Imperial Valley, “and they didn’t hit a windfall or anything, but it got the hooks in him and then he became a contract packer.”

Three years later in the Yuma Valley “he went into business for himself, he started Pasquinelli Produce,” said Pasquinelli.

“The significance to me of this panel truck is that it is a truck like my dad used to have in San Jose. But the significance of ’49 is the year he started the business,” said Pasquinelli.

“It’s not something that’s been in the family for ever and ever. I located the truck up in Oregon and bought it and did some work on it. I didn’t want to make it a real hot rod, but I did want to make it a truck that has got air conditioning and disc brakes, and it has a bigger engine in it. I took out the in-line six (cylinder motor). It’s a driver. I mean I can drive it to San Diego and back, drive it wherever I want to. And I put some nice upholstery in it.”

“I wanted the logo on it,” said Pasquinelli.

“If I wanted to do an original van I would not have done that kind of paint job on it,” continued Pasquinelli. “There were some compromises on it to make it look good, but I think the paint job is like, ‘Whoa!’

“So it accomplishes what I wanted to accomplish, the fact that it’s an original ’49 Ford panel truck. It’s not an original engine or the original upholstery but it signifies the year we went into business, so it’s an important year for me, ’49, and it’s the same kind of truck my dad used to have for the deliveries that they made in the San Jose area to the mom and pop stores.

Pasquinelli said he had thought about getting a panel truck for quite a while, visiting car shows, always checking out the panel trucks that were on display and thinking to himself, “You know what, it sure would be neat to have one of those old trucks like that and build it up.”

Then a business associate spotted a panel truck on a car lot in Portland, Ore. Pasquinelli bought it for $16,000 and had it delivered to Yuma on one of his company’s flatbed watermelon trucks.

Once it was here, “I drove it and I got to thinking, ‘Why not have the best of both worlds and make kind of like a semi street rod?’” said Pasquinelli. “I don’t want mag wheels, I don’t want keyless entry, but I do want to be able to drive this thing. I want air conditioning, I want bucket seats but I want all original body work and everything else.”

With that thought in mind, friends recommended that Pasquinelli send his truck it to a custom rod shop out of state, but another friend suggested a local company, Jim’s Rod Shop, owned and operated by Jim Whitener.

“So I took it over there and it’s worked out good,” continued Pasquinelli. “Oh my gosh, I’m very happy with it, it’s just so much fun.

“Jimmy’s doing this for money, but he puts his heart and soul into those things too; he’s an artist. I think he’s as proud of that truck as I am, and he should be, he should be.”

And of course there is the pearl white paint and the custom-made Pasquinelli Produce Company logo, produced by Penn Neon Sign Co., on the side.

“One significant thing is different,” said Pasquinelli. “The original running board was like a big black ugly step that came out and I really think that as far as the aesthetics, it is like night and day. That’s the one change that is not original, but to me it makes that whole truck with the rest of it being original.”

As for the final price tag, he said, “Let’s put it this way. There are six figures in that truck.

“Of course when you really start working on these things it’s like remodeling a house … well, OK, let’s do this, let’s knock this wall out … and I wound up going way over budget on it. But I’m happy I got it and I’m having fun driving it and I’m not concerned about bringing it out only just to show it. I’ve been driving it around.

“It’s just to have fun with and commemorate a great time in my family’s life.”