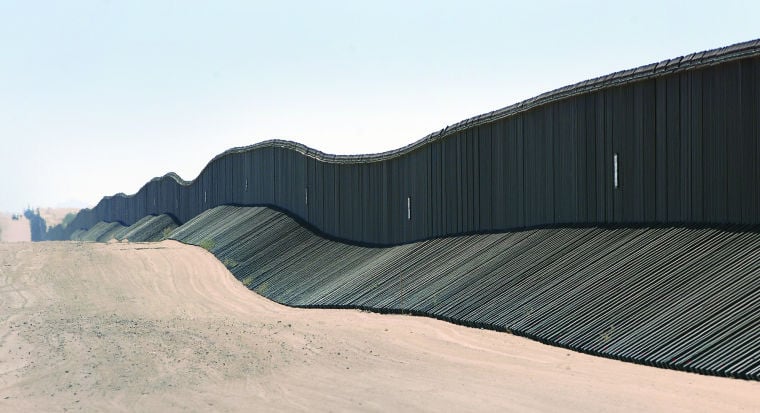 The border fence between the United States and Mexico disappears into the distance as it crosses the Imperial Sand Dunes west of Yuma.

A U.S. Border Patrol vehicle cruises slowly along the fence between the United States and Mexico south of the Imperial Sand Dunes.

The border fence between the United States and Mexico disappears into the distance as it crosses the Imperial Sand Dunes west of Yuma.

A U.S. Border Patrol vehicle cruises slowly along the fence between the United States and Mexico south of the Imperial Sand Dunes.

Over the past decade the Yuma Sector's border with Mexico has gone from being one of the busiest and most dangerous in the nation to one of the most secure.

"It is an area that has had a very positive turnaround compared to what it used to be," said agent Douglas Choi of the Yuma Sector Public Affairs Office.

The Yuma Sector, which stretches 126 miles from the Yuma-Pima County line east to the Imperial Sand Dunes in California, is one of nine sectors into which the Border Patrol divides the U.S.-Mexico border.

Of those nine sectors, however, the Yuma Sector has experienced the most dramatic decrease in the number of apprehensions of illegal entrants since fiscal year 2005, falling from 138,438 apprehensions that year to 6,105 in fiscal year 2013, a staggering 96 percent decrease.

As a result, the Yuma Sector has become known by lawmakers as a model for border security – one they hope to be able replicate elsewhere.

According to Choi, part of the reason for the success the Yuma Sector has experienced is because of the billions of dollars in federal funding the agency received in the early to mid-2000s when border security became a national hot-button issue.

That funding, Choi explained, was used for the construction of a border fence, adding more personnel, and installing better technology and infrastructure.

Choi said that every mile of the Yuma Sector's border with Mexico has some type of fencing, man-made or natural barriers, sensor technology, or is routinely patrolled. Also, since 2004, the number of agents assigned to the sector has tripled, increasing from 330 to more than 900.

In addition to radar and cameras, these scope trucks are also equipped with thermal imaging capabilities and a GPS range finder. It has an antenna mounted to the back of a pickup that when raised in the air allows agents to position the apparatus to sweep terrain.

Once in place, agents are then able to scan a 180-degree area of land every 10 seconds and detect human figures up to 10 miles away. The equipment is also able to provide the exact latitude and longitude of the subjects using a laser range finder and is able to point a beam of infrared light to guide agents wearing night vision goggles toward subjects hiding in the dark.

"They act as force multipliers," Choi said. "The agents who operate them are able to keep an eye on larger areas."

Border Patrol officials have said in the past that while the Yuma Sector has had an unprecedented level of making the border here more secure the past several years, it would be unrealistic to assume that agents are preventing every illegal border crossing attempt.

In addition, what is true in the Yuma Sector isn't necessarily true in other sectors. While other sectors have higher apprehension figures, most other sectors have longer stretches of the border to patrol, which means more apprehensions. Yuma is also more remote, and not near any major population centers, which may make it a less-than-desirable potential crossing point.

There may be several other reasons, Border Patrol officials said, that could explain why the number of illegal entrant apprehensions has dropped off so sharply.

Agent effectiveness is likely the main reason, but other factors could include a weak U.S. economy that has fewer jobs to offer, tougher new immigration laws, violence along the border caused by drug cartels and the area's dangerous terrain and harsh environment.

Another reason for the sector's success has been the partnerships it has with other federal, state, local, tribal and Mexican law enforcement agencies.

A tremendous benefit of the unprecedented level of border security here is that it has also allowed Yuma Sector agents to assist Tucson Sector agents in patrolling an area known as "The Seam," which is in the vicinity of the Yuma-Pima County line.

Despite all the success, however, Yuma Sector agents still face many challenges on a daily basis, especially from well-funded transnational criminal organizations that have put in a tremendous amount of effort over the years to figure out new ways to smuggle drugs and people into the country.

While it is impossible to say whether the Yuma Sector will continue experiencing this type of success in the coming years, Choi said one thing area residents can be certain of is the continuing dedication of the agents, staff and support units who come to work every day.

"Even years from now, there will still be agents out there on patrol doing their best to keep the border secure and to protect our nation," Choi said.