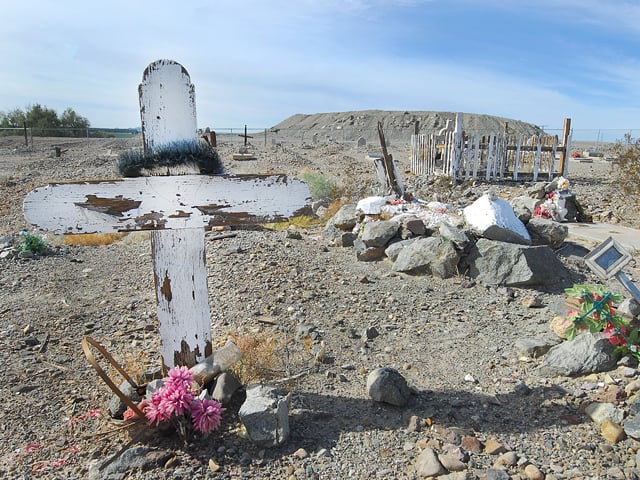 Located about one mile north of Bard, near the Laguna Dam on the All American Canal, sits the Potholes Cemetery, the final resting place for more than 150 souls. 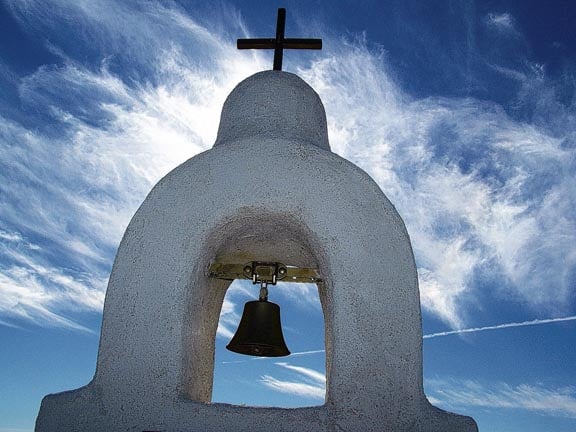 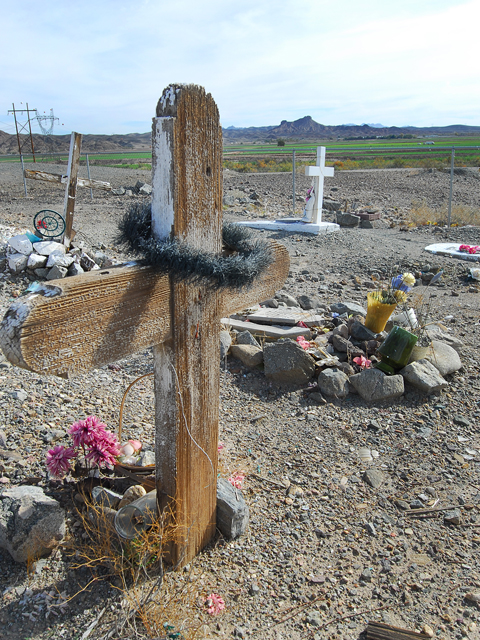 Wooden crosses and piles of rocks mark the grave sites of the deceased in the Potholes Cemetery.

Located about one mile north of Bard, near the Laguna Dam on the All American Canal, sits the Potholes Cemetery, the final resting place for more than 150 souls.

Wooden crosses and piles of rocks mark the grave sites of the deceased in the Potholes Cemetery.

About a mile north of Bard, Calif., lies an old cemetery.

This one doesn't have manicured lawns, shade trees and benches.

Rather, it seems left over from the Old West. It has rows of dirt mounds covered with rocks and small mortuary tin plaques with names long ago faded. Wooden crosses have dried out and cracked or broken into pieces. Cactus grows over unmarked graves.

Although at one time 500 people lived there, the old town of Potholes no longer exists. The only sign left is this cemetery.

Some estimates say about 300 souls are buried here. Some say it's more like 150. Whatever the true figure, the headstones tell of long lives and lives cut short.

The Potholes Cemetery is the final resting place for young and old. Parents, husbands, wives and children all buried together.

While some graves are unmarked, others tell a story. Take, for example, the epitaph on the grave of Fernando Nuñez Parra (1913-2001): “First born of Ramon Rios Parra and Juanita Alta Mirano Nuñez, of 7 sons and 4 daughters. A cowboy to the end died with his boots on.”

Below a lifelike metal boot, another plaque reads: “Left one boot up here, if you want the other one, you'll have to come and get it.”

Without knowing him, visitors know he was a cowboy to the end. Martha Parra Stickle, Fernando's cousin, confirms it.

“At the hospital the nurse wanted to get his boots off and he wouldn't let them. He said he wanted to die with his boots on,” she said.

Indeed he did. Now he rests with dozens of kin in a cemetery with deep roots. A mission-shaped historical landmark notes that the cemetery lies on the old site of the 1781 San Pedro y Pablo de Bucuñer Mission Cemetery.

The landmark proclaims the town's origin. In 1885, the United States, the Territory of Arizona and the Yuma Indian tribes signed a peace treaty. That's when about 400 to 500 miners, both Mexican and American, descended on the Potholes area to look for gold.

“Our family was one of the miners,” said Emilio N. Parra, 87, of Spring Valley, Calif.

His great-grandfather, Felizario Parra, came from Caborca, Son., Mexico, in the mid-1800s, looking for gold. He found it in a mine by the Imperial Sand Dunes.

Felizario is buried in Picacho, but his son's grave reveals the story. Julian Parra, Felizario's only son, was born in 1867 and died in 1937. He was buried in El Centro and moved to Potholes. His grave at the Potholes Cemetery notes it was Felizario “who in April 1876 discovered the Mesquite Diggings, last of the gold bonanzas in the Southwest.”

After the mining ended at Potholes, the search for more gold took the miners east across the Colorado River. Potholes, which got its name from the lava holes and natural sinks in the region, became their home. Many of the townspeople helped build Laguna Dam.

Potholes Cemetery was declared a historical site in 1907. Its original location lies several hundred feet north of the All American Canal. On Nov. 13, 1935, with construction of the canal, 151 human remains were moved to the old mission cemetery.

The cemetery is also the resting place of other relatives who have been buried since.

“We've had a lot of burials over there,” Emilio said.

Manuel took good care of the cemetery. Emilio remembers his uncle, a sheriff's deputy in Bard, hauling rocks from Imperial and Laguna dams to stop the flooding river from eroding the cemetery.

When Manuel died, Emilio took over care of the site.

“Nobody else was there to take care of it. The fence was falling all away. It looked terrible.”

Emilio and his brother-in-law, Carlos Campuzano, began to restore it, replacing the fence and headstones.

There is a lot of evidence of his hard work. A plaque on the gravestone of Trinidad Quiguis Rios (1834-1909) declares: “This plaque dedicated by great-grandson and great-granddaughter Emilio N. Parra, Trinidad Parra Campuzano.”

Emilio's father and two of his brothers are also buried there. A more recent grave belongs to his son, Joel Martinez Parra (1952-2006), which notes that he was a “specialist in the automotive industry.”

“My cousin Emilio has been coming here and little by little working on it. It was important to Emilio to preserve this little cemetery,” Stickle said.

During a recent visit to the cemetery, she knelt down and put her hand on her father's gravestone. “My dad (Manuel, 1906-1987) specifically said he wanted to be buried here.”

Stickle walked over to another grave. “That's my dad's little girl,” she said, pointing to a small grave. Maria Ortega Parra died at her birth along with her mother, Manuel's first wife, in 1931.

“If her mother hadn't died, I wouldn't be here,” Stickle noted.

Other infant's gravestones don't have dates, such as the one for Jose and Santiago Rios (“a child of God” is written on both) and Jose and Josefita Rios, which says “God's angels.” Ramona V. Ybarra's gravestone only says “Niña (girl)”

Other people buried in the cemetery are “related to us in one form or another, through marriages or other ways,” Stickle said.

Another person whose life was cut short too young: Manuel Melendrez died in 1916 at 25. Someone etched on a cement slab with a wooden cross, “This Cross is Made of Mesquite Wood.”

Then there are those who lived to a ripe old age. Chona M. Lopez (1885-1983) lived to be almost 100 years. Her gravestone says, “Recuerdo de sus hijas Rosa y fam., Gregoria y fam., descanse en paz (In memoriam from her daughters Rosa and family, Gregoria and family, rest in peace).”

The cemetery's remote area is both a blessing and a curse. Stickle appreciates that it's been saved from vandalism, but its location also means “it's a lost cemetery for a lot of people.”

Rebecca Corona-Nickerson, family historian and Felizario's great-great-granddaughter, remembers Ramon Parra's funeral when she was a little girl. Family members had to dig the graves themselves.

“It's full of rock, such solid rock. I remember hearing the shovel hitting the rocks,” Corona-Nickerson said, adding that she also remembers the “blue skies and that dirt.”

“Funerals there are very different than those in the pretty cemetery with grass and flowers. This cemetery is mean. You go in there, you have to earn it,” she noted.

“It shows if you're buried here, you had a hard life. It's a hard place to live and these were hard people.”

Corona-Nickerson appreciates Emilio's efforts to restore and maintain the cemetery. “It's 100 percent Emilio's efforts. He worked in hot weather, put money into it. He's been the spirit of it. It's his legacy. He put his heart into it, his back, his soul.”

Therefore it's not surprising to hear Emilio say he expects to be buried there. He points out that he already has a spot reserved.

Mara Knaub can be reached at mknaub@yumasun.com or 539-6856. Find her on Facebook at Facebook.com/YSMaraKnaub or on Twitter at @YSMaraKnaub.