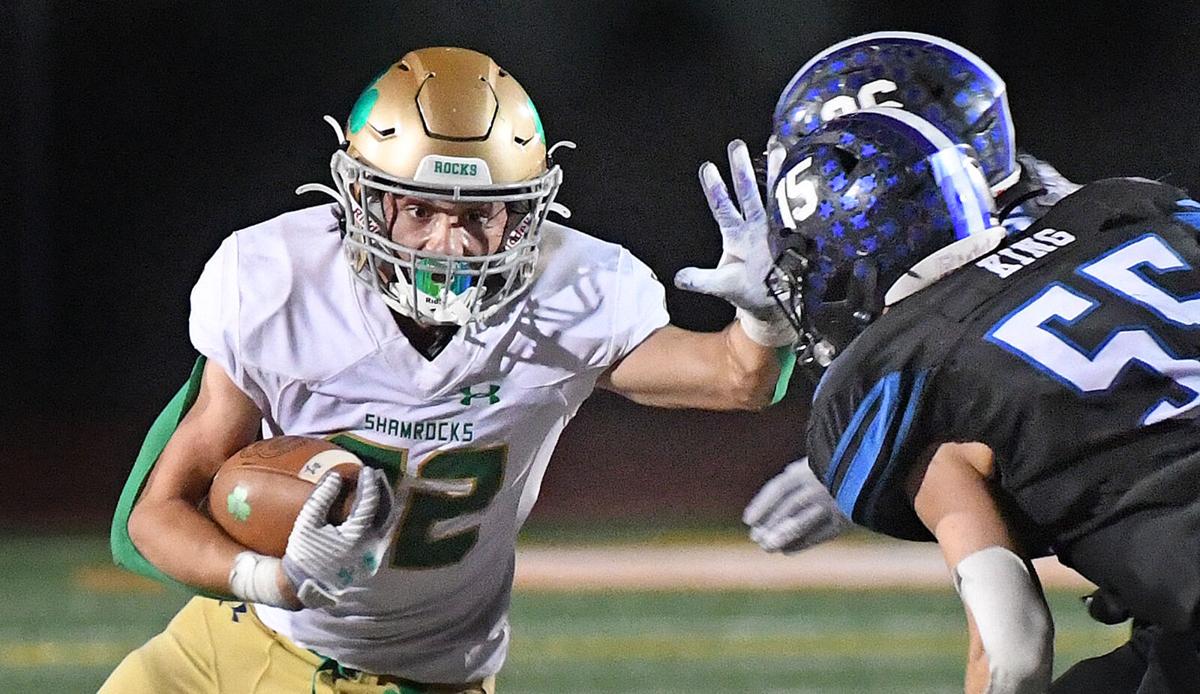 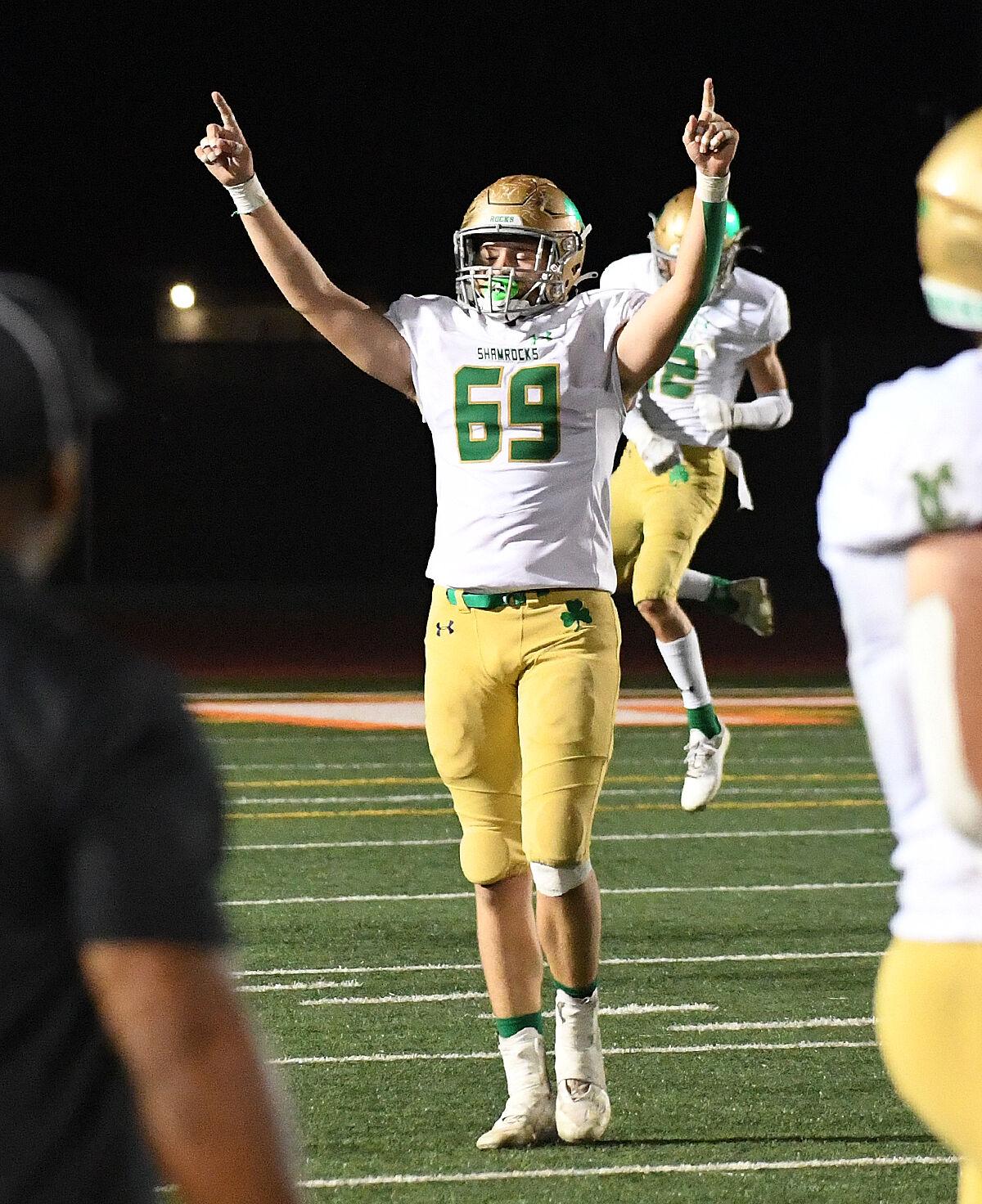 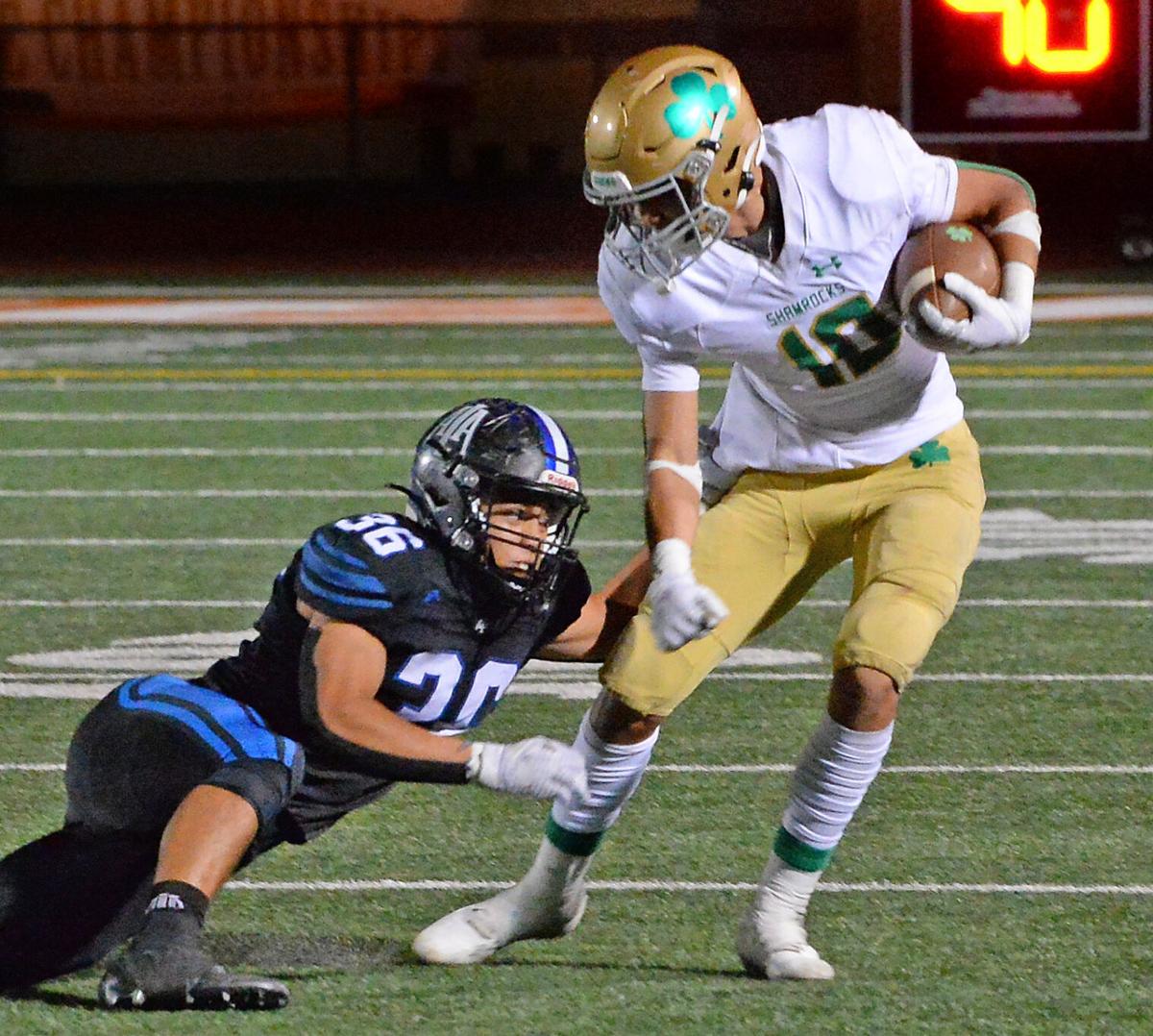 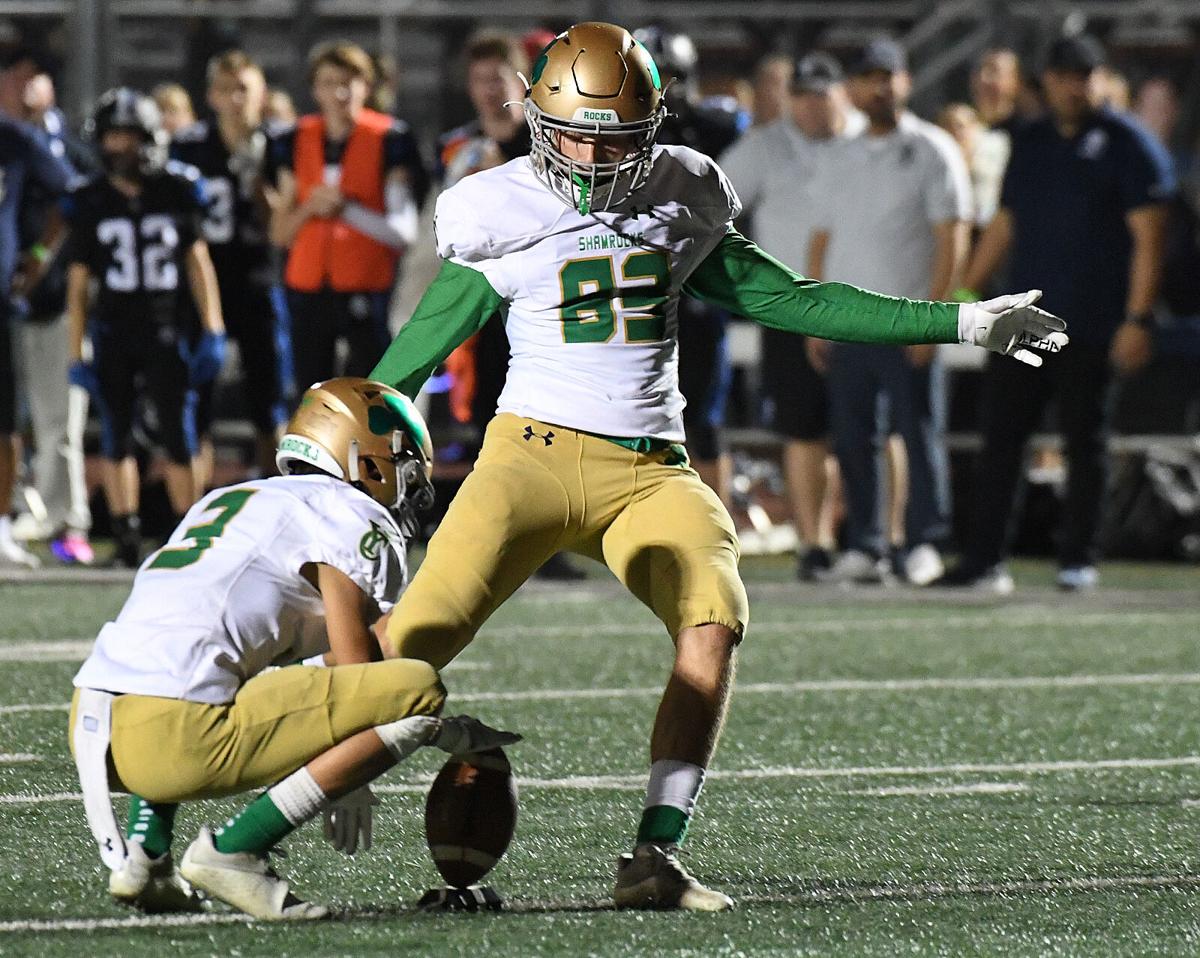 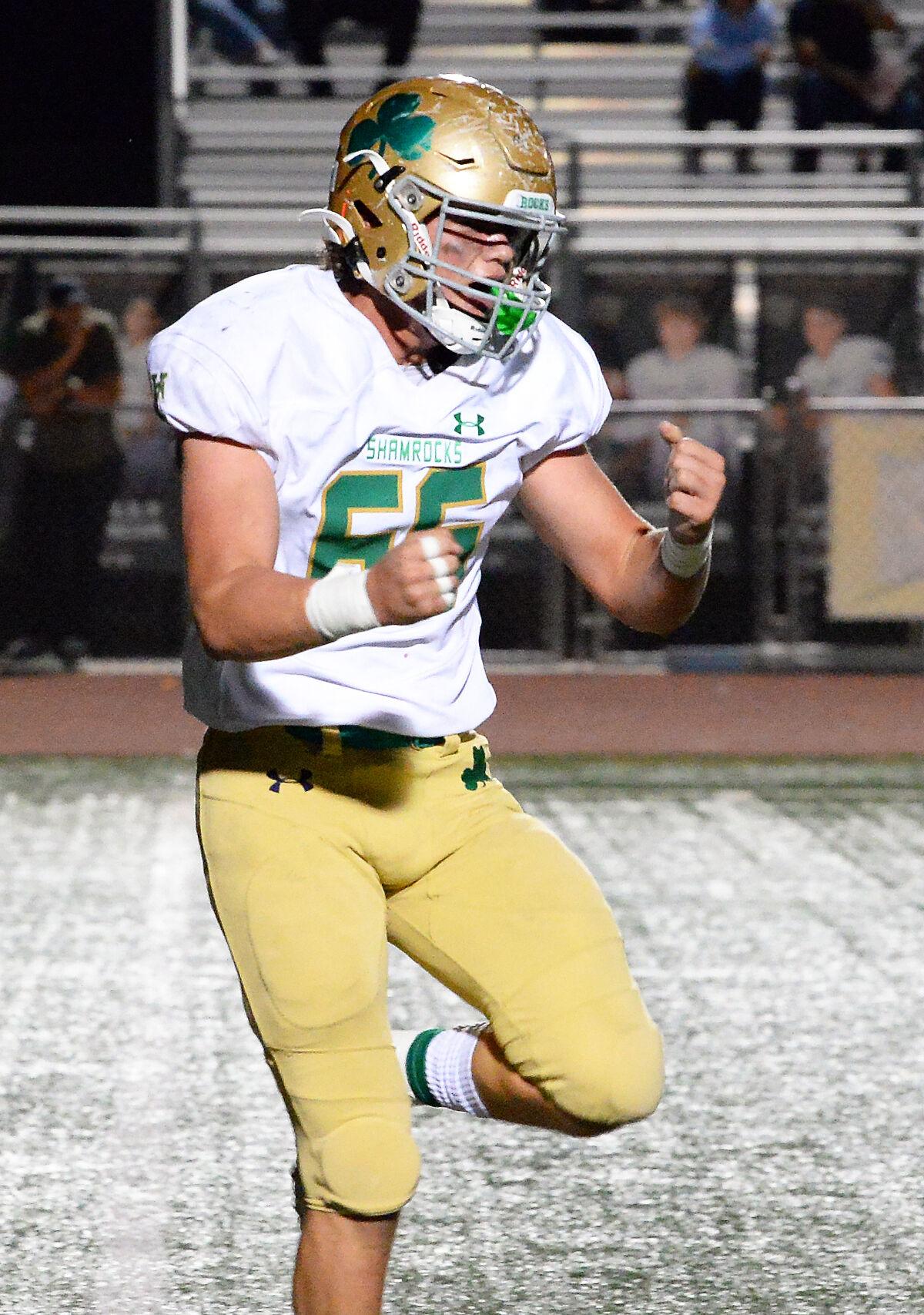 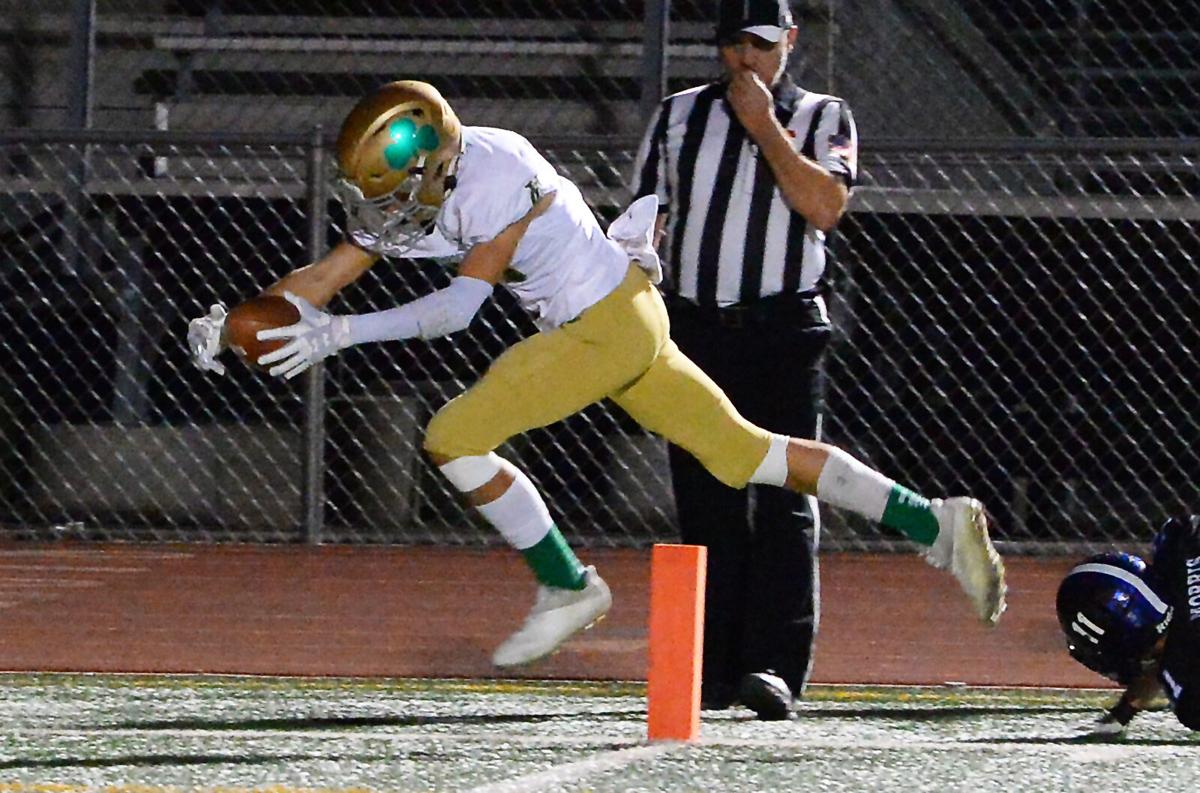 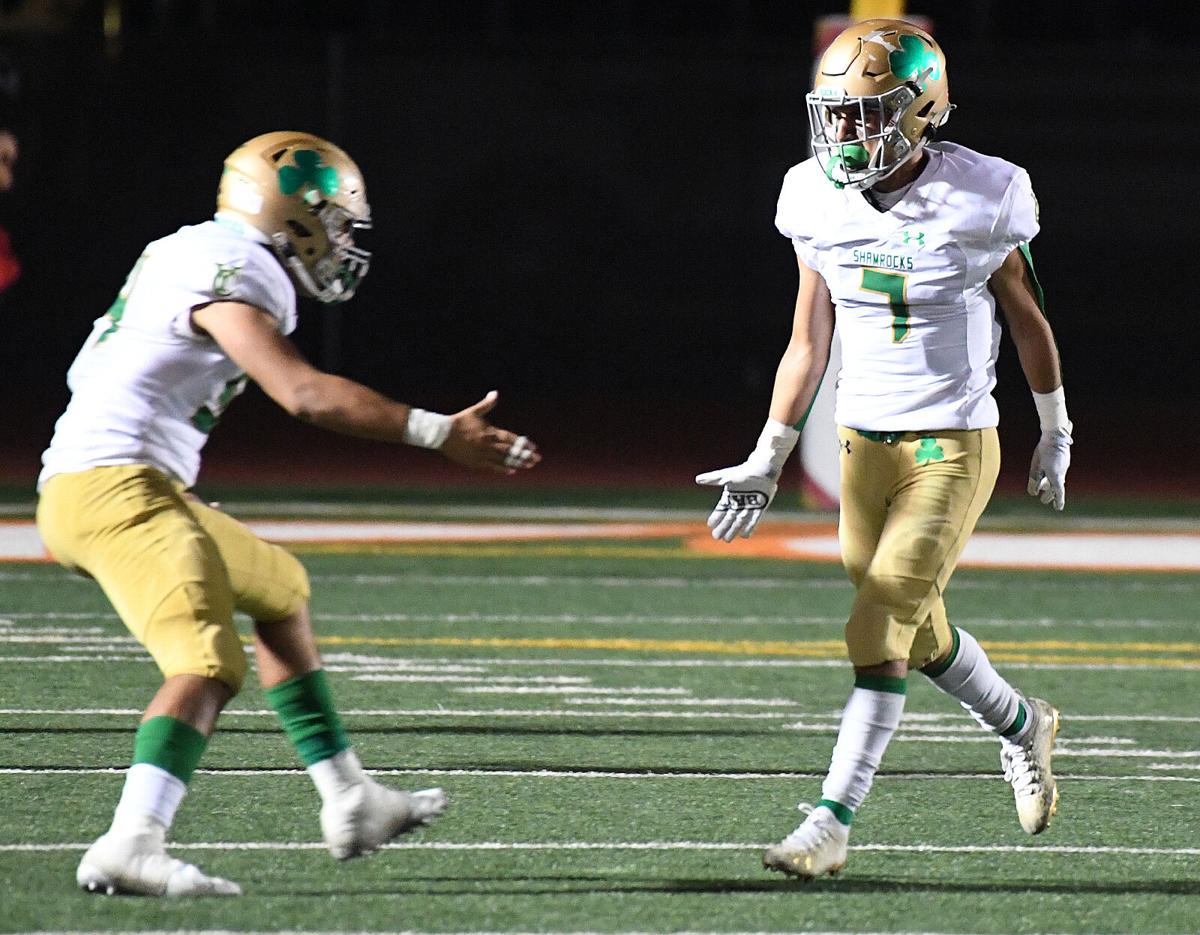 Buy this photo at yumasun.com Yuma Catholic's D.J. Sakay (right) gets a low-five from teammate Tryston Hall after Sakay and the Shamrocks' defense stopped American Leadership Academy-Gilbert North on fourth and goal at the two-yard line in the second quarter of Saturday night's Arizona Interscholastic Association 3A State Championship semifinal game at Campo Verde High School in Gilbert. Photo by Randy Hoeft/Yuma Sun

Buy this photo at yumasun.com Yuma Catholic's D.J. Sakay (right) gets a low-five from teammate Tryston Hall after Sakay and the Shamrocks' defense stopped American Leadership Academy-Gilbert North on fourth and goal at the two-yard line in the second quarter of Saturday night's Arizona Interscholastic Association 3A State Championship semifinal game at Campo Verde High School in Gilbert. Photo by Randy Hoeft/Yuma Sun

Dressed in green and white and out of his usual uniform, the senior carried Yuma Catholic past American Leadership Academy-Gilbert North 31-26 in Saturday’s AIA 3A State Semifinal game at Campo Verde High School.

Black’s production throughout 2021 has been limited, but when his number was called against one of the best defenses in all of 3A, he responded.

“I feel like I did everything I could,” said Black. “I left everything out on the field. And I’m proud of myself.”

YC head coach Rhett Stallworth added: “We’ve been waiting for Devon to emerge. We know Devon is a stud. Devon showed up and so did the O-Line.”

But Black’s 242 yard (186 rushing, 56 receiving) and one touchdown performance may not have been his favorite moment in Saturday’s victory. After ALA’s quarterback Adam Damante had several pre-game words for the Shamrocks over the past two weeks (referring to them as “clowns”), Black enjoyed the eye-to-eye postgame handshake.

“It felt good to shake hands with No. 8 and have him humble himself after saying something like that,” admitted Black. “And I don’t think they expected us to come out with that running game tonight.”

Following an offseason injury that forced Black to miss fall camp and the first few weeks of the regular season, his productivity comes as a surprise to many, except by his teammates.

“After his injury, from Day One, all (Black) thought about was coming back to this team healthy,” said quarterback Richard Stallworth. “He’s been putting in more work than I’ve ever seen anyone putting in. He deserved it tonight. It was his night. He put in the work to have a night like this.”

While Black barreled through the Eagles’ defensive unit, it was the Shamrocks’ defense that deserves a lot of credit for Saturday’s win.

YC had two goal line stands in the opening half and forced a turnover late that allowed the Shamrocks’ offense to tack on more points.

On Sept. 17, ALA-Gilbert North racked up 324 yards on the ground. On Saturday, YC’s defense allowed just 64 yards on 15 carries.

“This time we won (the physicality),” said coach Stallworth. “(Defensive coordinator Jarred) Lackey put a great game plan together and our kids showed up and played lights out. We played physical and nasty.”

YC emphasized the importance of stopping the run and forcing ALA’s quarterback to use his arm. The ability to contain the ground game ultimately became the deciding factor.

“We thought if we could make them throw, we’d come out,” said Stallworth. “Even though they had some success, we came up big when we had to. Early on, penalties kept their drives alive, not their offense.”

ALA-Gilbert North entered halftime with the momentum favoring its sideline. But the Shamrocks’ defense forced a punt on the Eagles’ opening drive of the second half. And after a poor second quarter offensively, Stallworth and Black led the Shamrocks on a 14-play, 96-yard drive that eliminated seven-plus minutes off the drive to give YC a two-score cushion.

“We were able to stay committed and get ahead of the chains,” said coach Stallworth. “Near the end of the half though, we’re backed up and it’s my fault. I should have waited (the half out) and punted, but we tried to make something happen and we ended up throwing a pick.”

Saturday’s clash displayed why these two programs are the cream of the crop in the 3A conference. But it was Yuma Catholic that was able to come away victorious.

“It’s good for (our guys),” said coach Stallworth. “They’ve worked hard for it and went out there and took it. A lot of teams have worked hard up to this point. We were the better team tonight.”

The Shamrocks also set a new state record in Saturday’s win. Stallworth needed 214 yards to break a passing record previously set in 2013 by Desert Edge’s Anthony Hernandez. With his 273 yard performance, Stallworth is now the all-time state leader in passing yards for a single-season. Stallworth sits at 4,722 yards with one game remaining.

The Lobos whipped the Shamrocks a season ago 38-14 in the 3A state championship game and are looking to become back-to-back champions. But Stallworth and his team are eyeing their first championship since 2014.

“For us, it’s going to be another game,” said coach Stallworth. “We want to go do what we can to win. Preparation starts now.”